The first week of school is always punctuated by a number of games and exercises for students and teachers to get to know one another. Teachers try to instill classroom routines and expectations while students began to navigate new social bonds. Each teacher has their own special way of introducing their students to each other by starting the year off and trying to create cohesion and teamwork in the classroom.

In the spirit of cooperation and teamwork, students from the Independent Learning Center (ILC) at TwispWorks were engaged in a sort of challenging scavenger hunt last Thursday creating comical spectacles throughout downtown. The exercise given to the students was to form teams and begin the process of negotiation and bartering to trade up items for something bigger or better.

Each team began with a paper clip. From there the teams were instructed to trade the paper clip with someone in the community for an item bigger or better. The definition of bigger and better could be interpreted by each team member independently and other than a few ground rules, it was totally open as to what students could collect. All items had to be hand-carried, pushed or pulled — driving was not allowed, so teams set out on foot to begin the bartering contest.

The first team I encountered was rolling a tractor tire up the sidewalk under the canopies along Glover Street. The tire had been traded up from a pencil which in turn had been traded from the paper clip. I am pretty sure they were having fun gaining looks and laughs as they rolled back and forth in search of something bigger or better. The next team I encountered was in possession of a vintage evening gown, which I believe was later traded up for a lamp.

The students had a couple of hours to complete their trades until the final judging at 1:30 p.m. The Methow Valley News’ own Don Nelson and Callie Fink from the Methow Housing Trust were enlisted as judges for the competition. Among the final items included a phone charger, the lamp, the tractor tire, two live chickens, and a car! Kevin Hicks at Kevin’s Automotive donated a small white sedan from a customer who didn’t want it anymore.

Because the students were instructed not to drive, and it’s questionable if this vehicle was even drivable, the students pushed the car up Lincoln Street to the ILC just in time for the judging. And they managed to get it started. The grand winners went to a tie between the two chickens for their uniqueness as live merchandise, and the car for value and size.

Sarah Mounsey, ILC director, noted that one of one of the lessons of the challenge was identifying how well we know our community.

Successful trades often relied upon relationships in the community. Students who knew business owners or employees of businesses utilized those connections while others had to begin the process of creating relationships through basic social skills like introducing themselves to local proprietors, explaining their project, and practicing the art of persuasion.

In addition to the bartering challenge, ILC students had an exciting first week filled with excursions and hands-on projects. Kim Odell, ILC teacher, shared with me that the students also got to work with Washington Department of Fish and Wildlife biologists to release Pacific lamprey into the Methow River, and got a tour of the roasting facility at Blue Star Coffee Roasters. Sounds like a fun start to the school year, and based on the smiles on the faces of those kids rolling the tire down Glover Street, I think they enjoyed every minute of it. 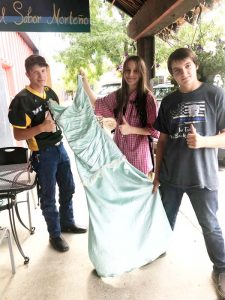 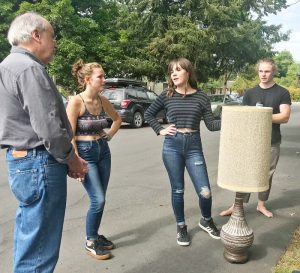