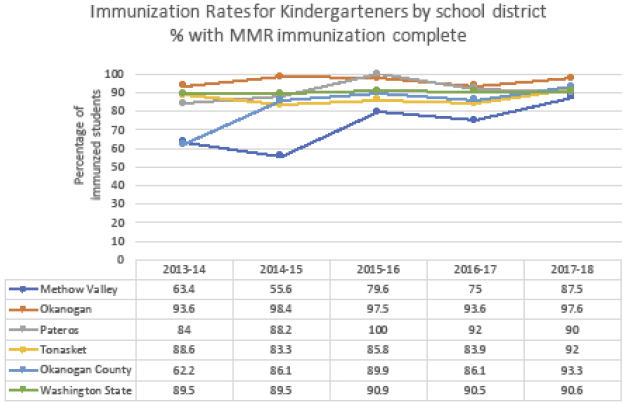 All students must be immunized against measles, mumps and rubella (MMR) to attend school or day care this year. A state law that took effect in July eliminates the ability for a family or caregiver to claim a philosophical exemption to the MMR vaccine.

Immunization rates in Okanogan County have been increasing, but Okanogan County Community Health Director Lauri Jones is still concerned about the number of kids who aren’t vaccinated — and how easy it is for a serious disease like measles to spread.

“We’ve made huge leaps since 2004, but we still want numbers higher because of the importance of herd immunity. We don’t want to be below 10%. We have some work to do in the Methow,” Jones said. When enough people are vaccinated against a disease, herd immunity protects the whole community — and, in particular, people who can’t get vaccinated because of an allergy or weakened immune system — because germs can’t travel as easily from person to person.

Medical exemptions — when the vaccine is ill-advised for health reasons — are still acceptable under the law. Families are allowed to request a religious exemption if they belong to a religious body or church “whose beliefs prevent them from seeking medical treatment for their child,” according to a summary of the law by the state Department of Health (DOH). But personal and philosophical objections to the MMR vaccine are no longer legal.

That worries Jones. “It’s going to cause a lot of controversy, especially in the Methow Valley. Rates are always lower in the Methow, compared to the rest of the county,” she said.

Immunization against measles, mumps and rubella has improved in the Methow since the 2013-14 school year, when just 63% of kindergartners were immunized. In 2017-18, the number was up to 87.5%, but that’s still lower than the rest of the county and state, where the immunization rate ranged from 90% to 98%, according to DOH statistics.

Washington hasn’t posted numbers for the 2018-19 school year yet, but the immunization rate in the Methow improved last year. In February, after 50 cases of measles had been documented in Washington, the student population in the Methow had a 90-percent immunity rate to measles, said then–school nurse Laura Brumfield. Still, there were 60 students who were not immunized.

Even if someone claims a religious exemption, a health care provider must sign off on it, Jones said. Some people have such a strong philosophical opposition to vaccines that they may be looking for other ways to keep from immunizing their kids. “As one provider put it, ‘It’s amazing how many people have suddenly found God,’” Jones said.

Students in alternative learning programs who participate in school activities such as athletics or band must also be immunized. The law also applies to private schools and to employees and volunteers at child-care centers.

When kids don’t have proof of immunity, the county’s health officer will have to enforce the law and those kids won’t be allowed in school, Jones said.

There are no changes to vaccine requirements for other diseases. Students are required to be up to date on all childhood vaccines — for chickenpox, diphtheria, haemophilus influenza type B disease, hepatitis B, pneumococcal disease, polio, tetanus, and whooping cough (pertussis) — but philosophical exemptions are still permitted (along with medical and religious exemptions) for these vaccines. An earlier draft of the legislation would have removed the philosophical exemption from all immunizations, but it was narrowed to cover only MMR.

Alarm over measles has increased this year because of a major outbreak in the winter and spring. There were 86 confirmed cases in Washington in 2019, the majority in Clark County, in the southwestern part of the state. Fifty-two cases occurred in children 10 and younger, and 17 cases were in children ages 11 to 18, according to DOH.

Nationwide, measles cases from January through mid-August 2019 exceeded 1,203. That’s the highest number of cases since 1992 — and certainly the highest since measles was declared eliminated in 2000, according to the Centers for Disease Control and Prevention. The 2019 cases were recorded in 30 states, but more than 75% were linked to outbreaks in New York.

Measles (also called rubeola) is spread by coughing or sneezing. The virus is so contagious that it can remain in the air for up to two hours even after an infected person leaves the room. Almost everyone who is not immune will get measles if exposed to the virus, according to DOH.

Measles is the deadliest of all childhood rash/fever illnesses. It can lead to pneumonia, brain damage, blindness and deafness, according to DOH. Immunization has been so effective against once-commonplace diseases that there are now several generations who’ve never witnessed the effects of polio, measles or pertussis, Jones said.

Kids should get two doses of the MMR vaccine, one between ages 12 and 15 months, and the second between ages 4 and 6. Adults born after 1956 may need a dose of MMR if they haven’t already had the vaccine.

People who have been immunized against measles have a 3-percent chance of getting the disease. Those who aren’t immunized have a 100-percent chance, according to the Department of Health.

“The bottom line — from the Public Health perspective — is that the risk of measles far outweighs anything the vaccine could cause,” Jones said.

The MMR vaccine is available free or at low cost. Washington provides free vaccines to people under the age of 19. For more information, call 1-866-397-0337.

Albertsons Pharmacy in Wenatchee is providing free vaccines to people without insurance. Call (509) 662-5152. 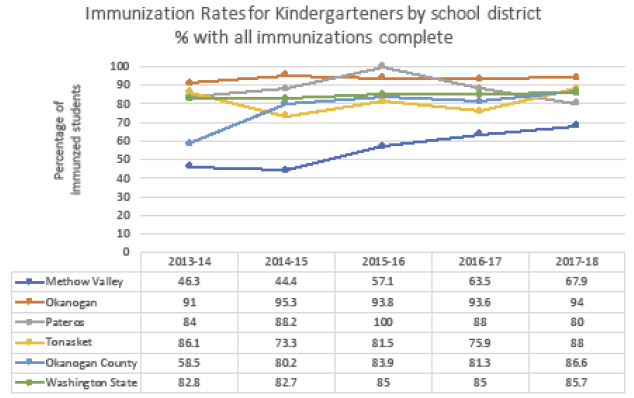