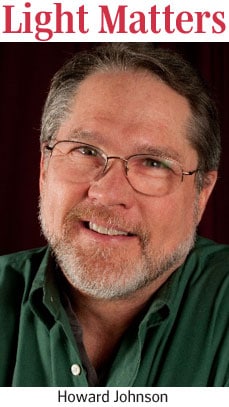 Methow Valley residents today enjoy a magnificently dark night sky filled with stars, planets, comets, the moon and myriad other celestial features. When city-dwellers visit, they often comment on the beautiful sweep of the Milky Way, the colorful glow of the Aurora Borealis, and the annual sparkling showers of meteors.

Visitors comment on the sky here because they cannot see the same features in their own home towns. Profligate and inappropriate use of exterior lighting has rendered their night skies un-viewable.

I say profligate because the number of outdoor lights in use worldwide increases rapidly every year at a pace much faster than the growth of population. As people become more affluent, and as the cost of LED lighting comes down, more and more outdoor lights are installed, lighting up driveways, walkways, parks and streets. In a modern city, very few spaces are left naturally dark.
I say inappropriate because most outdoor lights installed today have no hood or shield to prevent light escaping upward into the sky. All the light that escapes upward from a city scatters off dust and humidity in the atmosphere, creating a “dome” of light over the entire city. Against the background of this glowing dome, fainter stars cannot compete. A new study by National Geographic (news.nationalgeographic.com/2016/06/milky-way-space-science) estimates that 80% of Americans now live in cities encapsulated by domes of light so bright that the Milky Way is no longer visible.

The intensely dark night sky over the Methow Valley is an accident of geography. The nearest large cities, specifically Seattle, Spokane and Vancouver, B.C., each being roughly 150 miles away, are too distant to exert much influence over our sky conditions. Therefore, our sky is naturally dark and will remain so as long as we don’t turn on too many lights. Think about that.

The dome of light already visible over the downtown core area of Winthrop grows every year. Satellite images from the VIIRS radiometer installed on the NASA Joint Polar Satellite System reveal that light emanating from the Winthrop area increases at a rate of approximately seven percent annually, which amounts to a doubling every 10 years. At that rate, in only 50 years, the dome of light over Winthrop will have obliterated most of the stars in the sky, just like what has already happened in Wenatchee and Seattle. People living in Winthrop will no longer see a velvety deep, dark universe, only a dim, uniform glow. Eventually, memories of the dark sky will fade, leaving behind nothing but textbook descriptions of how the sky used to be.

Fortunately, a town like Winthrop can protect its night sky through a combination of lighting ordinances, a commitment to community education, and a little philanthropy, but let me warn you that only a handful of towns in the entire United States have managed to do so. These towns are known as Dark Sky Communities. Flagstaff, Arizona, was the first. There are 15 others. We can become one of that elite group. The International Dark-Sky Association (IDA) stands ready to help us.

The IDA, founded in 1988, is a recognized authority on light pollution and the leading organization combating light pollution worldwide. The mission of the IDA is simple: “To preserve and protect the nighttime environment and our heritage of dark skies through environmentally responsible outdoor lighting.”

Before saying anything else about this group, let me point out that the IDA does not exist to take away your outdoor lights. On the contrary, the IDA fully understands the role of outdoor lighting, both public and private, in promoting the safety and welfare of a community. What the IDA asks is that everyone please use outdoor lighting (1) where it is needed, (2) when it is needed, and (3) with an intensity and color suitable for the task at hand.

On another point, the IDA does not exist to bankrupt poor homeowners by forcing them to buy better porch lights. Most new Dark Sky communities grant as much as 10 years for individual homeowners to bring lights into compliance and strongly encourage philanthropic organizations to help indigent homeowners comply.

I believe that Dark Sky issues are both timely and appropriate for our region to consider. I suggest that the communities of Winthrop, Twisp and Mazama to join in an effort to study the Dark Sky Community program, both benefits and costs, and decide whether to proceed towards obtaining Dark Sky Community designations for all three. With that accomplished, those communities could then extend their reach across the entire western half of Okanogan County to create a Dark Sky Reserve, perhaps the largest in the United States, permanently protecting and preserving the night sky over the entire Methow Valley region.

What do you think about light? If you have opinions or questions concerning lights, lighting, the sky, or anything else, email editor@methownews.com.

Howard Johnson, PhD, is the author of “High-Speed Digital Design: a Handbook of Black Magic,” and its sequel, “High-Speed Signal Propagation.” His work also helped create ethernet technologies that are used today, and he was a regular contributor to EDN Magazine for many years. He lives between Twisp and Winthrop and is a member of the Methow Dark Sky Coalition, which is promoting increased Dark Sky efforts in Winthrop and the valley. This is the first of several columns he will write about the topic.