This is a developing story and will be updated if additional information becomes available.

Owners Mark Tesch and Michelle Jerome were visiting with friends in Lost River and about to put food on the grill when they got a call from a neighbor saying that their house was on fire.

“We have lots of offers of places to spend the night,” said Tesch as he watched the firefighters spray water while flames erupted from the attic. “There’s no need to get upset. Nobody’s hurt. The cat made it out.”

The couple bought the house in September and moved in in May, relocating from Chelan. This was part of their “semi-retirement,” Tesch said.

While they lost personal effects and photos, they are O.K. and have insurance, he said. “I’ve dealt with worse situations before in my life. It’s one more story to tell.”

“We’ll build something – we’re fully insured,” Tesch said. Tesch has worked as a general contractor and has a son who’s an architect.

8:00 p.m., Aug. 6, 2019 — A house and shed on the 300 block of South Methow Street in Twisp were destroyed by fire Tuesday evening, but firefighters kept the blaze from spreading to neighboring homes.

An explosion and fire were reported at about 6:30 p.m., and thick black smoke was soon roiling up from the shed and nearby two-story house. The dark-colored plume was visible from all over town. Firefighters were overheard on the scanner discussing downed power lines and a propane tank located dangerously close to the blaze.

Residents on nearby Lincoln Street used garden hoses and shovels to keep the fire from advancing to their homes on a rise west of the blazing house. At least one nearby apartment complex was evacuated as a precaution.

Okanogan County Fire District 6 units from Twisp, Winthrop, Carlton and Mazama stations responded. They were able to control the fire after they deployed on Methow and Lincoln Streets, arcing long blasts of water onto the structures. More than a half-dozen engines responded, and crews from the Department of Natural Resources and Douglas County were also on hand if needed. Law enforcement and Aero Methow were also on scene.

Although the fire was contained, flames and smoke could still be seen coming out of the attic area after 7 p.m.

It was not immediately known how the fire started, or whether the occupants of the house were at home.

6:53 p.m., Aug. 6, 2019 — There is currently a structure/house fire in the area of 3rd Avenue and Methow Street in Twisp. Fire, law enforcement and EMS are all on scene and en route to the area. There are reports of powerlines down and a large smoke plume is visible from many areas in town.

Click any of the thumbnail-sized images to launch a full-screen viewer. 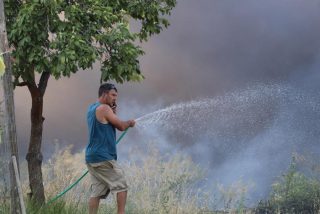 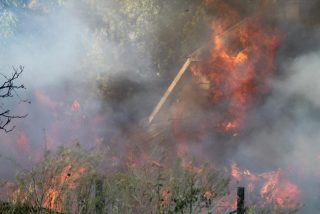 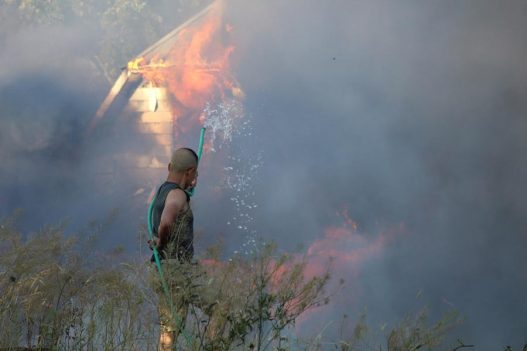 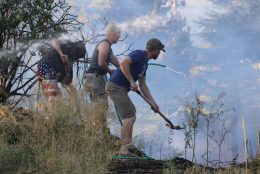 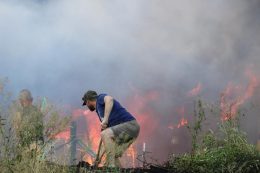 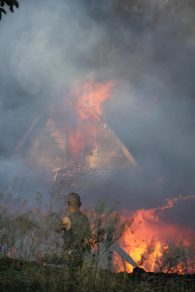 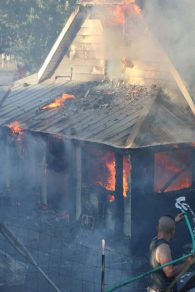 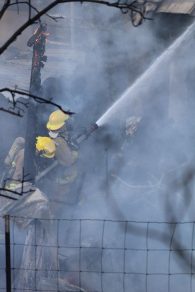 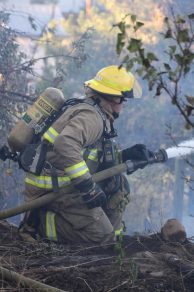 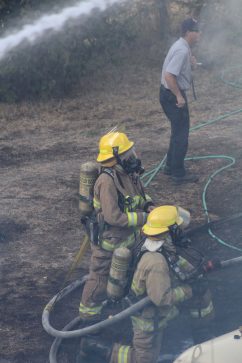 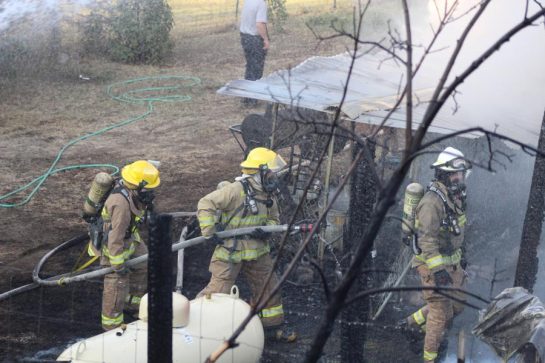 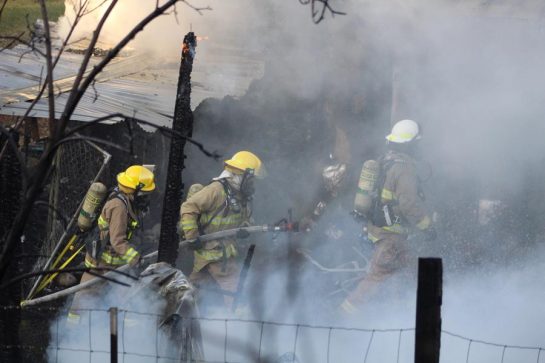 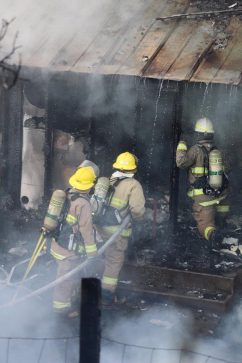 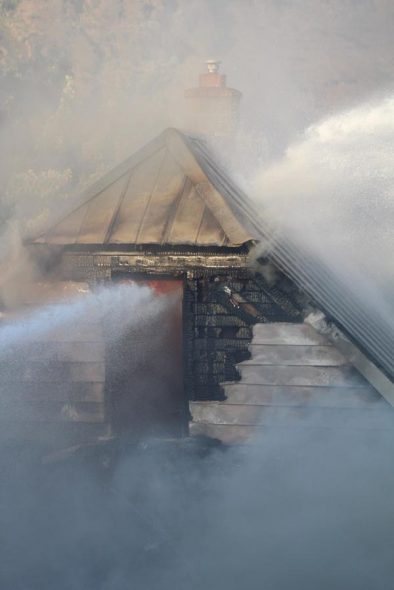 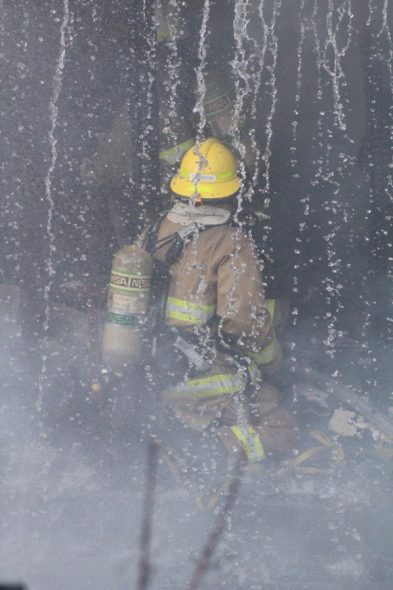 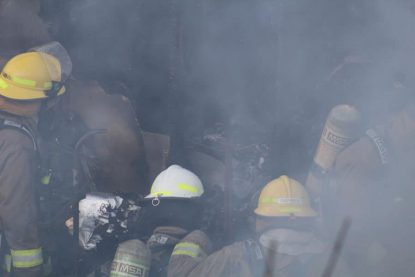 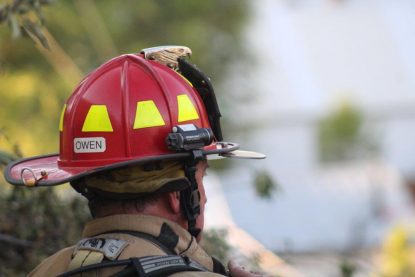 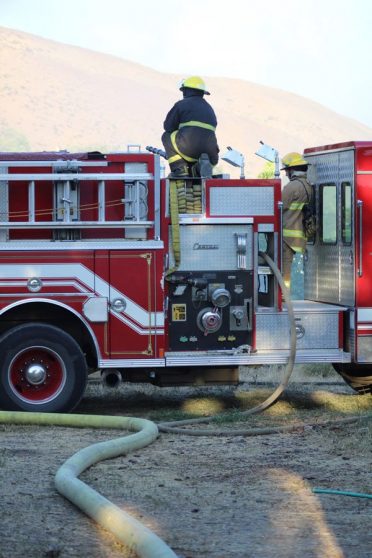 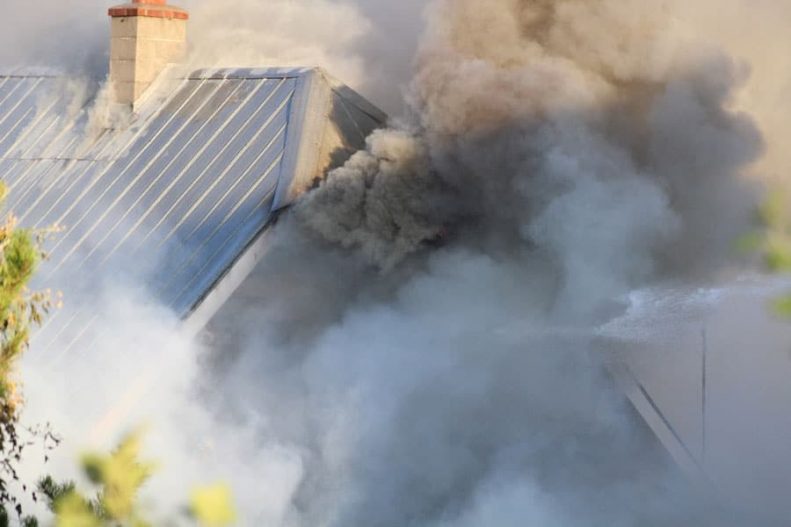