Fire preparedness is the new focus for county recovery group

Five years after the Carlton Complex Fire destroyed almost 300 houses in the Methow Valley, Pateros and the Chiliwist, the group that helped survivors rebuild and recover is shifting its focus to make sure people are not caught unprepared if — or when — there’s another disaster.

“We not only have the ability — we have the responsibility — to do this,” said Carlene Anders, executive director of the Okanogan County Long Term Recovery Group (OCLTRG). “We can’t have this happen again with our eyes closed — or become complacent. There’s too much at stake.”

We can’t have this happen again with our eyes closed — or become complacent. There’s too much at stake.

The OCLTRG is completing the last of 38 homes it has built over the past four years — largely with volunteer labor — for fire survivors who had no insurance and no way to get back on their feet. Twenty-one of the homes went to survivors of the Carlton Complex Fire; the rest replace houses that burned the following year in the Okanogan Complex Fire.

It was already a daunting task to help people scattered across the 420 square miles devastated by the Carlton Complex Fire. But the destructive mudslides that followed — and even more land burned in 2015 — pushed the recovery group to assist four neighboring counties as well.

And now the organization is using its expertise to mentor groups across the country that help survivors of fires, floods, hurricanes and tornadoes.

The OCLTRG grew out of several local groups that formed organically while the Carlton Complex Fire was still raging.

The geographic breadth of the original groups was a key part of their success, said Anders. They had representatives for every community affected by the fire — the Methow Valley; Pateros and Brewster; and Malott, the Chiliwist and Okanogan. “It made it fair and equal,” she said.

That pattern holds true — in rural and urban areas — around the United States. “What I’m seeing now, across the country, is that groups that do that succeed. Others have a harder time,” said Anders.

“The Okanogan County group was particularly successful,” said Joan Rave, federal disaster recovery coordinator for the Federal Emergency Management Agency (FEMA). “They’re a great model for disaster-impacted communities.” FEMA representatives were on the ground in Okanogan County in the immediate aftermath of the Carlton Complex Fire, helping organize and set goals for the recovery effort.

Because recovery is locally driven, each community needs to determine its own priorities and figure out how they want their rebuilt community to look, said Rave. While this approach isn’t new, recovery groups have had varying degrees of success over the years. “I’ve been doing this for 30 years, and have seen communities where it doesn’t work,” said Rave.

Communities that already have a plan before a disaster — emergency shelters and warning systems, arrangements for animal care, and a vision for how they want to look — have a much easier time recovering, said Rave.

To Rave, what stood out about the Okanogan organization was strong leadership. “You don’t see that often, because communities get traumatized. You need a central, organized committee,” she said. OCLTRG was also particularly successful with fundraising, said Rave.

Many issues can stall recovery. Some communities were already struggling with a declining population before a disaster hit and, without good jobs and other essentials, can’t bounce back. Sometimes populations disperse and never recover, said Rave.

Other places rebuild quickly, but the new housing is larger and more expensive than what was destroyed. So lower-income people leave and the population changes. “That’s not uncommon,” said Rave.

And in some places, the devastation is so traumatic that people just don’t want to live there anymore, she said. 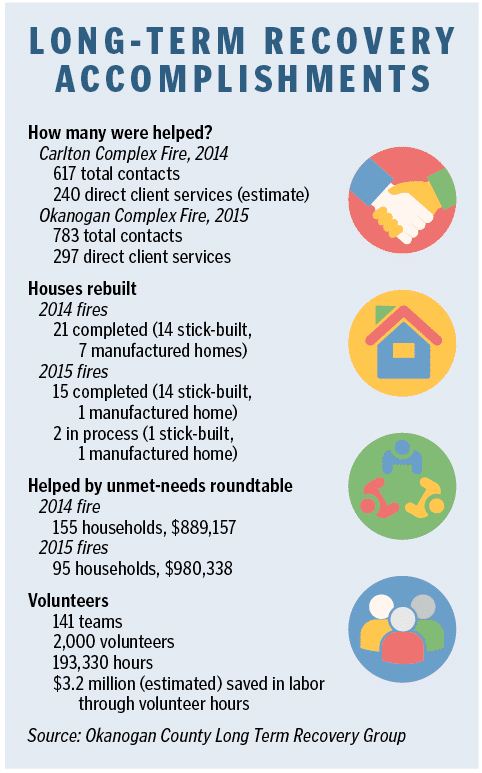 The local response and recovery groups grew out of meetings between existing social-service providers like The Cove and Room One, emergency responders, faith groups and concerned citizens, who gathered spontaneously to address urgent needs for housing, food and other supplies.

“When we started this whole thing called long-term recovery, we looked at the mess we were in during the weeks after the Carlton Complex Fire and asked, ‘What do we wish we had in place to be better prepared?’” said Jason Paulsen, who headed up the long-term recovery group in the Methow.

The Methow group focused on improving communications and infrastructure. They wanted to prevent a replay of the crisis caused when all phone service and 911 lines stopped working, said Paulsen. They developed plans to help businesses weather the economic blow of a disaster. And they took on land restoration and helped farmers and ranchers who desperately needed fencing and grazeland.

The Methow Valley recovery group spawned two organizations, the Methow Housing Trust and Methow Ready. The housing trust zeroed in on the long-standing lack of affordable housing in the valley, which was only exacerbated by the fire. Just a few months ago, the first homebuyers moved into brand-new homes in the housing trust’s communities in Twisp and Mazama.

Methow Ready has been helping people set up neighborhood networks to address local needs, share resources and create maps.  That effort has now expanded through the Map Your Neighborhood program, which is holding trainings in Omak/Okanogan, Tonasket/Oroville, and Chelan this year.

Despite the almost 300 houses destroyed by the Carlton Complex Fire (and another 150 properties that were damaged), FEMA rejected Washington’s application for assistance to individuals. Washington Gov. Jay Inslee appealed FEMA’s decision, but the appeal, too, was turned down.

Even when it’s granted, individual assistance isn’t very much, said Rave. (The maximum benefit would have been less than $33,000 for Carlton Complex Fire survivors.) Most people who rebuild rely on homeowners’ insurance.

So a group like OCLTRG was vital. Through a strict vetting process, OCLTRG helped build homes people who didn’t have insurance, but who had a clear title to their property. The group also assisted more than 500 people with other needs. Given that fire survivors didn’t get federal assistance, it’s noteworthy that the OCLTRG was so successful with the rebuilds, said Rave.

FEMA was instrumental in connecting people in Okanogan County with National Voluntary Organizations Active in Disaster (VOADs), which dispatch volunteers to do everything from sifting through debris to rebuilding to construction management. These volunteers — and lots of donated lumber and appliances — were critical to being able to build those three dozen homes.

Rave recognizes the challenges of coping with a disaster that affects people over a wide geographic region. Just because there weren’t 10,000 people affected, the remoteness of the area, the intensity of the fire, and the fact that many county residents already lived in poverty made recovery here a challenge, said Rave. “It’s really hard to organize a community that’s so spread out. How do you get people enthused?” she said.

FEMA did reimburse the county, towns and local utilities for 75% of their costs of rebuilding infrastructure. Some of that money is still coming in. The Okanogan County Public Utility District (PUD) just received almost $500,000 in June, the final reimbursement of $8.2 million toward the $11.5 million the PUD spent rebuilding powerlines and other infrastructure, according to the district.

The OCLTRG also coordinated an “unmet-needs roundtable.” While less visible, the roundtable — made up of organizations from the Salvation Army to the United Methodist Committee on Relief — met every single week from 2014 until this July. These groups have picked up the tab — a total of $1.87 million for 250 households — to cover diverse needs presented anonymously by the OCLTRG’s disaster case managers that weren’t covered by any other program. The roundtable is on track to wrap up the remaining cases by the end of the year, said Anders.

“It’s all holistic recovery. It’s all the same path. The whole goal is to never see this happen again. It’s the same job. We have the ability to make a difference,” said Anders.