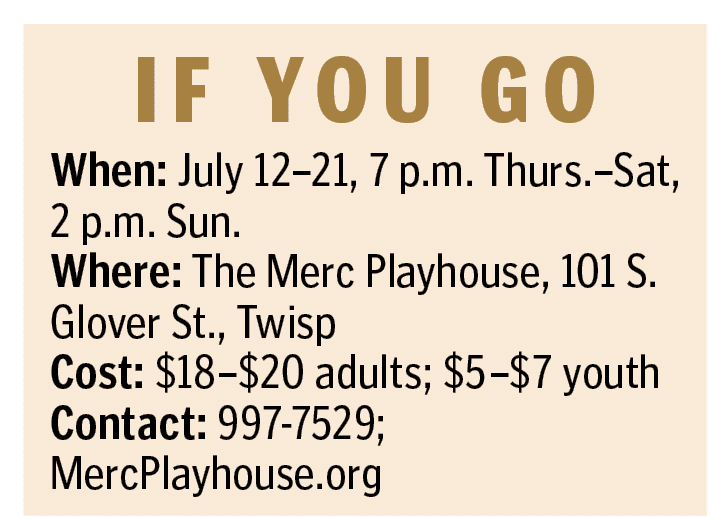 There’s a reason you’ve never heard of the upcoming play at The Merc Playhouse, “A Diner on the Way.” The show, which opens Friday (July 12), is making its national debut right here in the Methow Valley.

And the setting simply couldn’t be more appropriate, as the play revolves around conversations taking place at a small-town diner much like many of the local eateries found around the valley, where despite the familiar faces and places, one never quite knows what to expect.

“A Diner on the Way” is a “suspenseful, humorous, and witty play told through the lens of the Hubbards, a big-city family traveling through a very small town, stopping for a quick bite at a local diner,” according to The Merc. It’s about relationships, current social issues, and the kind of conversations that take place amongst family members and strangers alike.

Watching the play, audience members might feel as if they are witnessing interactions they’ve observed dozens of times, at one of our local bakeries or pubs. The production “speaks to small towns,” said Mark Easton, who directs the play. “It’s set in a diner in the middle of nowhere, and it’s fascinating exploring the issues in it, like family relationships, sexism and homophobia.”

Easton used one rehearsal to take the cast to the Cinnamon Twisp Bakery to watch people and observe how they interact with each other. “Watch the customers,” he told them. “Watch them in conversations. Watch Renda [Grim, a vivacious bakery employee who is no stranger to the stage herself].”

“The goal is for the actors to make the audience members quickly forget that they know the people on stage, and to begin to view them as characters,” Easton said, alluding to one of the challenges of small-town community theater: recognition. With the ensemble cast onstage throughout the entire play, the audience has a good chance to get to know the actors not as friends and neighbors, but instead as characters.

Adapting for The Merc

Easton has an extensive background onstage as well as in short-film directing, but his live stage experience is more limited. Still, this didn’t stop him from both suggesting “A Diner on the Way” to The Merc’s programming committee (of which he is a member) and offering to direct it. “I wasn’t sure they’d like it,” Easton said of the script, “but they all read it and said, ‘Yeah, this is a great play, very socially relevant. It’s a great way to balance out our season. We need to do it.’”

Easton was familiar with the relatively obscure “A Diner on the Way” because he saw it the only other time it has been performed, six or seven years ago in Colorado. “The playwright [Michael Ray Young] is a friend in Estes Park, where we used to live,” said Easton, the “we” referring to himself and his wife, LaShelle, who is one of the female characters in the play. “We saw the play and liked it a lot,” said Easton.

Easton knew, however, that there were things he wanted to treat differently in The Merc’s production. And without the burden of a household name script, Easton and the actors have had the freedom to create the production unencumbered by previous expectations. “LaShelle and I are the only people in the valley — and pretty much in the world — who have ever seen this play,” he said.

Although Easton has changed the presentation of the original production, there’s one thing both productions have in common: the jukebox. “We’re using the one from the original,” Easton said. “They shipped it out from Colorado.”

Any form of live theater, regardless of level of recognition, presents a challenge. Easton says that live theater “is a whole different process than film.” When you’re filming, he said, “you’re just trying to capture the scene — the action, the emotion. Once you capture that, you get to edit and enhance, make it just the way you want it.”

Live theater, Easton said, doesn’t offer second chances … until the next show, of course. “But we’re lucky to have had the luxury of rehearsing as much as we have been,” he conceded.

Easton has invited small test audiences to two different rehearsals, mostly to give the actors experience in pausing to allow time for laughter, as the play is quite funny. “The audiences laughed in completely different places,” he said wryly. “So much for the experience in timing.”

The actors onstage represent a range of age and experience, said Easton. Some are theater veterans, while others have never been onstage. A few have acted before, but not in decades.

Magnolia Brown, a 2019 Liberty Bell High School graduate, has been in numerous youth theater productions, but “A Diner on the Way” is her first adult show. Cast Members Phil Quevillion and Greg Wright are theater veterans, but Quevillion is new to the valley, and Wright is several decades away from his most-recent appearance onstage. Hannchen Menck took acting classes in college but has never appeared onstage, while Jamie Petitto’s theater experience includes a Readers’ Theater production at The Merc, along with TV acting experience. And the youngest cast member, Evan Doran, is just 10 years old.

The cast members are taking their work very seriously, including serving as a stage managing squad, which is unusual in even community theater. “Everyone stepped up to manage props, sets, the pre-show routine, and intermission,” Easton said. “They’re working on getting in character and staying that way onstage, remaining engaged in the dialogue even if they don’t have lines.” Doran, who spends considerable time coloring to pass the time when he’s not onstage, even asked Easton, “Is my character at an age where he would color inside the lines or outside the lines?” in an effort to embody his role with authenticity.

Further authenticity comes in the form of the real food the actors will consume onstage each night. After all, the play is set in a diner, and in a theater as intimate as The Merc, Styrofoam chicken-fried steak and mashed potatoes would look like, well, Styrofoam. Lovingly prepared by Merc Executive Director Missi Smith and board members Jane Orme and Jane Hill, the diner’s dinners will be the real deal, and if they don’t get consumed onstage, they most surely will backstage.

Community theater’s challenges have always included cast recruitment, and this shortage of human capital is heightened in the summer season. “When we first moved here someone told me ‘Don’t make any extra commitments during the months when your irrigation is on,’” Easton said, adding ruefully, “Now I know what they meant.” As evidenced by Easton’s early troubles simply recruiting enough dedicated actors, many regulars to the stage avoid summer productions, while others withdrew from early commitments to the play.

Coupled with the challenge of casting the play and maintaining a full cast, finding a life balance has been elusive for Easton. With watering, beekeeping, yard work, and — oh yes — jobs, having both Eastons spending countless hours in the theater has been tough. But Easton speaks of the production with such enthusiasm that one could be tempted to believe that directing the play has from the beginning been as graceful as it seems to be now.

But “this is the cast we were meant to have,” said Easton. Referring to some casting changes that took place even as recently as three weeks ago, Easton said “Once we got the right cast in place, it all came together.”

“We’re still working on it, though,” he added quickly. “It was hard to get our momentum due to all the casting changes, so we’re still fine-tuning it.” But audiences will love the play, Easton assures us, although he recommends the play for ages 12 and older, due to some mature themes.

“A Diner on the Way” sheds light on the richness of life, the human connection, and the vagaries of small-town life. And in the same way that small towns constantly surprise by illuminating the unexpected, the play allows audiences to discover anew the fresh perspective on interpersonal relationships that community theater provides.

For information, visit www.MercPlayhouse.org or call 997-7529.