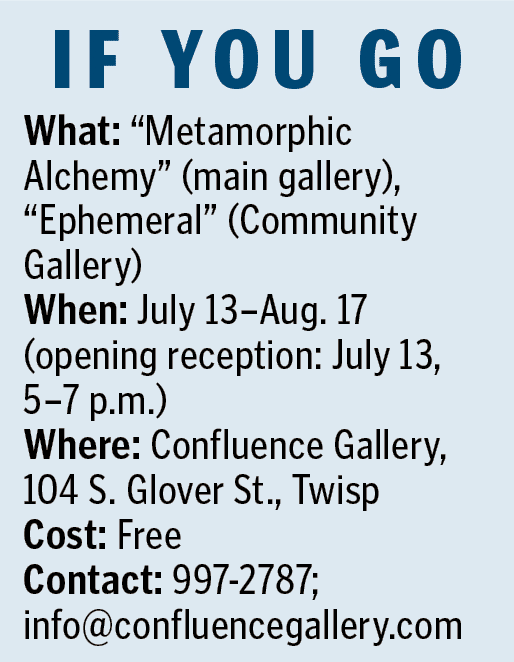 James Moore, co-curator of the encaustic-arts show opening Saturday (July 13) at Confluence Gallery in Twisp, considers himself a beginner in the art form.

Moore and fellow Tonasket artist Linda Augier brought together the works of 12 artists for “Metamorphic Alchemy,” the new show in the main gallery, which runs through Aug. 17. Whether beginner or highly accomplished, all of them were inspired by the freedom inherent in encaustics to make striking works of art.

Encaustics resembles oil painting, but only barely. The pigments used typically are oil paints, but they are mixed into beeswax that has been firmed up with a little tree resin. The wax is spread on a wooden board using a blowtorch.

The “metamorphic” in the show’s title signifies how all the works are made with heat. “Alchemy,” Moore said, is intended to convey the sense of discovery, of creating the unexpected, that comes with encaustic arts.

Moore came to encaustics via oil painting. As he describes them, the two media couldn’t be more different.

“I did a lot of landscape oil painting. It’s very much of a controlled medium,” Moore said, as he was hanging his works Monday (July 8) at Confluence. “This is not.”

“You heat it and let it move. You let it do things. There’s a spontaneity … something you didn’t intend. As an oil painter, that’s a really cool thing.”

Encaustic works will turn out differently, depending on whether they are made in winter or summer; the artist has a harder time stopping the wax’s flow in hot weather. The works also are sensitive to the artist’s state of mind, Moore said — whether patient and restrained, or aggressive.

Other artists showing in “Metamorphic Alchemy” take more care than Moore to color within the lines and control the appearance of the final product. Usually, Moore is more interested in lighting up the torch and seeing what happens. Sometimes, he’ll spread the wax with his right hand — he’s left-handed — to heighten the feeling that his art is not in his control.

Several artists mix other media with their encaustic works. Augier’s lone piece in the show includes letters written by her partner to his parents from Saigon during the Vietnam War. The man, who died of cancer decades after the war ended, was not a combatant; rather, he taught English and helped rebuild houses for International Voluntary Services.

“It’s not a political statement,” Augier said. “It’s more of a personal statement.”

Other artists have three-dimensional objects in the show. The wax medium can be applied to clay, cloth or found objects.

“The whole intention of the show is to bring together artists from all over the state, with a variety of styles, to see what encaustics can do,” Moore said.

Also opening Saturday, in the Community Gallery, is “Ephemeral,” a solo show by 22-year-old Spokane artist Chrysta Kay. Her works, primarily in pencil and ink, explore “the transient nature of waterways” and the fleeting connection between human emotion and bodies of water, according to a Confluence Gallery press release.

“She’s a very light, beautiful, yet intense artist,” said Rose Weagant, program administrator at Confluence. Going through Kay’s works in a storeroom on Monday, the day before they were hung, Weagant pointed out how seamlessly the artist transitioned from green to yellow in one of her drawings.

Kay is a good fit for what Confluence is trying to accomplish with its Community Gallery, Weagant said.

“We try to feature emerging artists who put a lot of effort in,” she said. “They’re putting their full force into being an artist.”