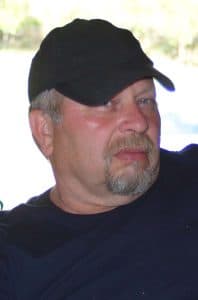 Rob, as he was known to all, from Winthrop, passed away on April 15, 2019, at the age of 67. Born in Sedro-Woolley on March 12, 1952, Rob grew up in Winthrop  on a farm/cattle ranch located on the East Chewuch River.  He was the son of Gary and Trudy Yockey.  He graduated from Winthrop High School. Rob moved to Seattle as an adult and worked as a civilian for the U.S. Navy for 30-plus years at Sand Point and the Everett Naval Shipyard. Upon retirement, he and his wife of 28 years, Kim, moved back to Winthrop to enjoy life in a small town.

With an affection for all things auto, Rob could be found lovingly restoring old cars to find the beauty within them, riding his Harley named Precious or happily digging holes and making roads with his tractor and excavator. A self-taught Mr. Fix-It, who knew a little bit about everything, Rob was the first person called when family and friends needed to know how to do something or someone to do it for them. Rob was always happy to lend a hand.

Rob was quick to find the humor and joy in life, he loved to have a good laugh. He enjoyed good friends, travel, being outdoors and spending time with those he loved.

Rob is loved and missed by many. His grandson summed it up a few years ago by saying “You are the best Pye ever, even better than apple pie. And you know how much we love apple pie!”

The family is planning a celebration of life for late summer 2019 to celebrate Rob and the beautiful area he called home.