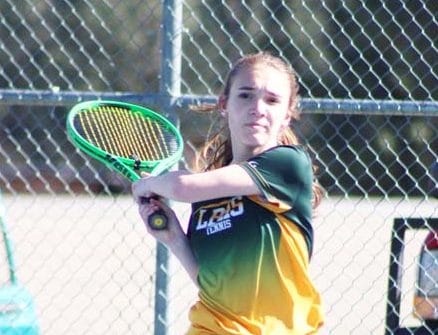 Liberty Bell High School senior Ruthann Matteson took another step closer to a repeat appearance in the state tennis finals by winning the girls No. 1 singles title at the district 1B/2B tournament last week in Omak. Meanwhile, the Mountain Lions’ Nicholas Fitzmaurice took third in boys’ No. 1 singles, and the doubles team of Tyler White and Isaac Blodgett also took third place in No. 1 doubles play.

All of them will play this week in the regional 1B/2B/1A tournament, again in Omak, for a chance to advance to the state finals. The girls’ No. 1 doubles team of Larkin Lucy and Ellie Blank took fifth place in district play and are an alternate at the regionals.

Liberty Bell coach Dave Schulz noted that, with the inclusion of 1A schools, the play becomes more challenging at the regional level.

Fitzmaurice started with a protracted first-round win over Oroville’s Jasper Burnell, 7-6, 5-7, 6-2, then lost his second match to Jasper’s brother Elijah, 1-6, 1-6. Fitzmaurice responded with wins over Pateros and Tonasket to claim third place.

In addition to the White/Blodgett’s third-place finish in doubles play, Cameron Taylor and Ezekiel Kirk lost to Entiat in the first round of No. 2 doubles and were eliminated, as were Zane Grubb and Alex Garcia in No. 3 doubles play.

Playing No. 2 doubles, Chloe Temple lost to Pateros, 3-6, 1-6, in the first round and was eliminated. Shelby Vintin, in the No. 3 singles position, won her first match over Tonasket, 6-2, 6-0, then lost to Lake Roosevelt and Tonasket and was also eliminated.

In girls’ doubles, Kristy Vieth and Amber Surface lost their first two matches and were eliminated.