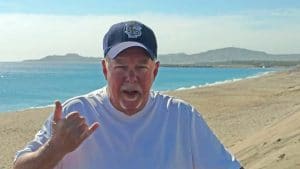 Chuck was an amazing chef, who learned his passion for cooking from his father. He worked at many fine dining restaurants in the Seattle area, at one point he had a Seahawks following on where he was creating his delicious cuisine. His passion for cooking brought friends and family together.

Chuck moved to the Methow Valley with Dena Goodrich. He was hired at Sun Mountain and became the executive chef, until they purchased the Riverside Grill in 1996. Chuck mentored many young chefs in the valley, teaching them his love and knowledge of fine cuisine.

He met the love of his life, Shannon Darwood, where they made a life together running the Riverside Grill. Charlie loved to travel and took many beautiful vacations throughout his life.

Chuck is survived by his fiancé, Shannon Darwood, her daughter Jenna Darwood, brother Sammy Bunyard, and many nieces and nephews and their children. Preceded in death by his parents, Charles and Joanne Bunyard.

There will be a celebration of life on Saturday (May 18) at 1 p.m. at the Scott residence, 17 Carlton Loop Road, Carlton. Please bring your favorite side dish and a chair.