Characterized by their long lives and steady growth, trees are a stable force within our forests. However, their resistance grounds them in harm’s way as disturbances like drought, fire and insects strike.

Climate change and the accompanying anomalous temperatures and periods of precipitation expected to hit the Pacific Northwest will increase these disturbances to the forests of the Okanogan Valley, but the scientific findings on which force will strike the forests hardest are surprising.

On the heels of Washington’s largest fires, the Carlton and Okanogan Complex fires, there is mounting concern surrounding the survivability of the forest in the lower eastern Cascades. However, the imminence of a large-scale bark beetle attack threatens these forests even more.

Mountain pine beetle is a devastating insect that burrows and bores into trees, cutting off nutrient lines and killing parts or wholes of pine — particularly lodgepole and ponderosa. Already the cumulative area under beetle attack has increased, and we can expect higher altitudes previously protected by cooler temperatures to become a greater proportion of this area in the future.

Warmer winter temperatures change the life cycle and range of the insect, which in turn changes the type and location of trees impacted. It all starts with rising winter lows at mid to high altitudes. Mountain pine beetles are killed en masse when temperatures drop below -10°C, Winthrop’s average December/January low between 1971 and 2000. However, based on the generalized findings of CMIP models, average winter temperatures are predicted to rise by 2.4°C from the 1971-2000 average, making it unlikely for beetle populations to experience die-offs.

Meanwhile, due to steeply rising summer mean temperatures, bark beetles will move through their life cycles more quickly so that not one, but two generations will exist in each year. Overall, a greater number of bark beetles will be able to invade a greater amount of forest. These insects will tunnel into the pines, bring damaging fungus, and cut off the tree’s supply of food. 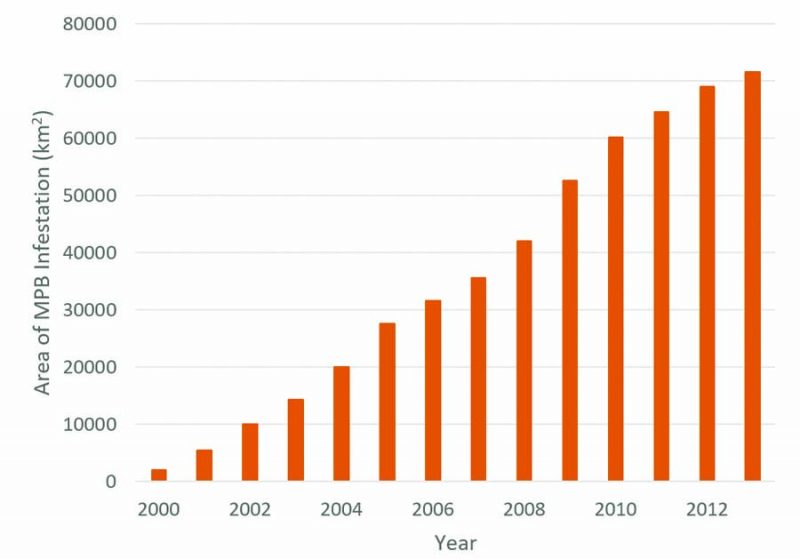 Forest condition is a factor that speeds along this process and has a greater impact on the severity of beetle invasion than the beetle population size. In drought, trees become more vulnerable to beetle attacks. Gases are normally exchanged through plant stomata, but these pores close to reduce moisture loss, which also limits the amount of carbon dioxide taken in.

With less carbon to provide the tree energy, the tree cannot defend itself as well or repair its tissue, so it succumbs more easily to the invaders. In the future, we can expect an intensification of the way Washington state receives precipitation: increases in autumn, winter and spring precipitation as rain while summer rain disappears, causing a higher frequency of statewide emergency droughts like that of 2015.

Organisms can adapt to environmental changes, but not on the time scale on which our climate is changing; only those with short life cycles and moving body parts — like the mountain pine beetle — can evolve along with their surroundings or migrate to regions of suitable climate.

The stands of pine filling backyards, public forests and recreation land are likely to be riddled with bore holes and topped with brown needles, creating a loss of income and ecosystem services for small forest landowners. We are accustomed to a landscape which will be pushed out by its inability to adapt — at least not in the window of time we have created by our own breakneck speed of fossil fuel emissions.

Sarah Crumrine is a first-year student at the University of Washington in the Interdisciplinary Honors program, studying environmental science and resource management. She became interested in the future of Washington forests under climate change after taking an oceanography class on Earth’s climate across time.