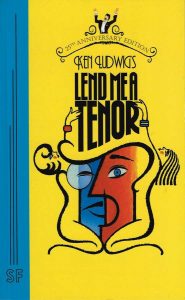 The Merc Playhouse’s fall production of “Lend Me a Tenor” appears to have gotten ensnared by a painful national controversy sparked by photos of elected officials in blackface.

The award-winning Broadway comedy, set in the 1930s, involves a madcap story of confused identity. A beloved superstar tenor is unable to appear at a gala, where he was to perform arias from “Otello,” Verdi’s opera based on the Shakespearean tragedy about the moor of Venice. Producers scramble to come up with a solution, ultimately planning to have another tenor impersonate the heartthrob singer.

But in February, a couple of weeks after the governor and attorney general of Virginia acknowledged that years ago they had posed in blackface in photos, The Merc — and dozens of theaters around the country — got a letter from the company that licenses “Tenor.” The letter said the theaters must replace the show with a version featuring a clown instead of Otello.

Kelly Donoghue, who was scheduled to direct the farce at The Merc in September, and Missi Smith, The Merc’s executive director, were blindsided. The representative at licensing company Samuel French sent a new script that substituted another well-known opera character, the clown from “I Pagliacci,” for Otello.

“In recent years there has been an author’s note observing that Otello could be performed without makeup. That said, we believe that the new change is the appropriate and responsible action to take today,” said the Samuel French email. “All performances of ‘Lend Me a Tenor’ should use the 2019 version.”

“I’m disappointed, thoroughly disgusted,” said Donoghue, who had already cast six of the eight actors. Donoghue was planning to use beards to make the two actors look alike, and had no intention of using black make-up.

The Merc was open to the “I Pagliacci” version until Donoghue read the script and felt it just wouldn’t work, said Smith. “The artistic value decreases if you use a clown,” she said. “That was the consensus of everyone who read the play.”

The biggest issue was that it didn’t make sense that Maggie, the love interest in the play, would swoon over a clown, said Donoghue. In the Otello version, she is smitten with the superstar Tito, who plays a larger-than-life character who “loves with a passion that rocks the heavens,” Donoghue said in a letter about Samuel French’s decision. “Adulation of Tito in a clown suit might be tougher to pull off,” he said.

“There is zero racism in the play,” said Donoghue last week. “Otello is a black man, bigger than life — a hero, like a god.”

“I’m beyond words about my anger toward the whole thing — and the bigger issue with our whole culture,” said Donoghue. “Nobody can laugh at themselves — they look for somebody else to blame it on.”

When Smith and Donoghue asked Samuel French if they could still present the Otello version if they used beards, they were told “no.” They both said the decision stifles artistic expression.

Some early productions of “Tenor,” which was written in 1989, used blackface as a disguise for the two singers, but in recent editions, playwright Ken Ludwig explicitly addressed the issue. “I am perfectly happy if you and your actors decide not to use the usual Othello makeup in ‘Lend Me A Tenor,’” he said in an author’s note. “The important thing is that Tito is playing a hero, and the play will work perfectly well if Tito wears a very distinctive costume and distinctive facial hair that Max can then imitate.” The script specifies a robe, tights and leather boots for the Otello character, but makes no mention of make-up for the disguise.

Looking for another play

“We’re fortunate in that we’re three months out before rehearsals,” said Donoghue, who’s been reading other scripts to find a replacement. But he worried that a majority of the plays in the Samuel French catalogue could trigger similar sensitivities.

Many plays have a great first act but then don’t deliver, or are not suitable for a small theater and cast, said Donoghue. The Merc’s programming committee was unanimous in its enthusiasm for “Lend Me a Tenor,” and everyone thought it would be a hit with local audiences, said Smith.

Donoghue had a career in theater in his younger life and has produced, directed and acted in many local productions over the past two decades. “Kelly wants something with no hot buttons. He just wants to make people laugh,” said Smith.

Smith hopes the same actors will participate in whatever show replaces “Tenor.” It’s unfortunate when people show an interest in theater, but then can’t be accommodated because another play requires actors to portray different characters or ages, she said.

Contracts for scripts vary. Some explicitly state that The Merc can’t change gender or race. Others include suggestions for shortening a play or adapting it for children, said Smith.

“There are things in all plays that address the human condition that aren’t great,” said Smith. The Merc warns audiences when a play contains adult content and rarely hears complaints, she said.

Samuel French agreed to refund about $900 to The Merc in licensing and royalty fees.

“When did our tiny little theater get entrenched in this topic that’s so huge in the world? Can’t we just do a play?” said Smith.

“They put us in a hell of a pickle,” said Donoghue.