Laugh-out-loud farce, exploration of family dynamics, a psychological thriller and a world premiere — there’s enticement for everyone in The Merc Playhouse’s line-up for next year.

The season starts in March with a children’s theater adaptation of the beloved E.B. White story “Charlotte’s Web.” The play follows Wilbur the pig and his friend Charlotte the spider, who’s determined to save Wilbur from the butcher. Jane Orme directs the cast of young actors.

In July, local audiences will be treated to a world premiere of “A Diner on the Way,” a drama about a family that gets lost on a journey and winds up in an old-time diner. The two parents and their young son and daughter end up exploring relationships, life and mortality. The play, by Michael Ray Young, will be directed by Mark Easton.

“Lend Me a Tenor,” the hilarious, Tony award–winning play about a world-famous opera singer, is the September offering. After the singer swallows a double dose of tranquilizers, he is incapable of going onstage. They recruit a stand-in, but the celebrated tenor revives, leading to confused and madcap exploits. Kelly Donoghue, a veteran of Methow Valley stages, directs the screwball comedy.

In November, the Merc presents the psychological thriller “Rope.” The play tells the creepy story of two Harvard students who murder a fellow student for the sake of adventure. Then they hold a dinner party, with their conquest in a chest that does double-duty as a dinner table. Directed by Don Nelson, “Rope” will be familiar to those who’ve seen the 1948 Alfred Hitchcock film.

The Merc is collaborating with other groups on two shows in May — the musical “Chicago,” produced by the Liberty Bell High School Drama Club, and “Love and Information,” directed by two students from the theater department at Seattle University.

“Chicago,” which won six Tony awards, is a tale of corruption set in the hot-jazz era of the 1920s. It follows rival vaudevillian actresses in jail for murder. The two plot their return to show business with crafty prison guards and slick lawyers. It includes toe-tapping music. It will have original choreography by said Missi Smith, The Merc’s executive director.

“Love and Information” is a series of vignettes about technology, communication and our capacity for love.

The Merc is also featuring four plays in the readers’ theater format. “Love, Loss, and What I Wore” is a series of monologues about women and the memories that live on in their clothes — about everything from mothers and families, relationships and growing up.

“The Curious Incident of the Dog in the Night-Time” is about a 15-year-old who’s brilliant at math but struggles with day-to-day occurrences. When the boy sets out to investigate the death of his neighbor’s dog, he unearths deep truths. “Curious Incident” won a Tony for best play.

Next up is “Nice People Dancing to Good Country Music,” a comedy about our intimate and public personas. A woman and her niece, a nun sent away from the convent because of her tendency to yell obscenities, live above a country bar in Houston.

The final readers’ theater is the sidesplitting “A Christmas Story,” where Ralphie dreams of a BB gun despite the danger that he’ll “shoot his eye out.” 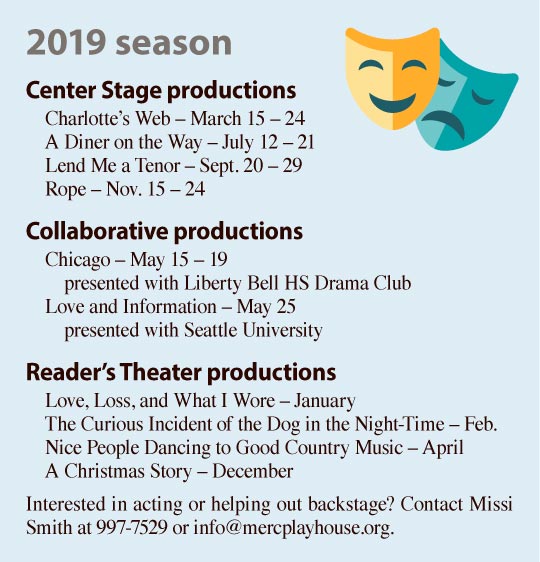