Lauralee Northcott has been a singer, musician, songwriter, teacher, artist, and wilderness guide and cook. Add to that list “author.”

Northcott just released a book of stories, poems, songs and recipes — collected over several decades of outdoor experiences — called “A Cowgirl’s Life in the Mountains.” All the elements are woven together in 11 chapters over 200 pages, and include illustrative pen-and-ink drawings by Northcott’s nephew, Peter Whitley.

The songs and poems have been accumulated over years, said Northcott, who lives in Winthrop. The trail stories are all drawn from real places and experiences. The recipes — many prepared in a Dutch oven and tailored to feed large, hungry groups — are “tried and true” culinary efforts, she said. “But any kind of oven will work,” Northcott added. 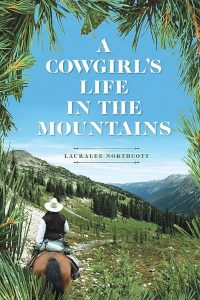 Some sample dishes include rainbow trout cakes, Sawtooth sausage balls, mountain meatloaf, Pasayten porkchops and piggy pudding. That’s just a few of the appetizers and entrees; there are also side dishes and desserts.

“It’s drawn from all the years of experiences put together, many of them very personal, ” Northcott said of the book. Assembling it was a two-year project. She had intended to present the book in sections, but a relative advised her to instead “tell it like a story.”

“So that’s what I did,” Northcott said. Each chapter includes tales, verses and lyrics, and trail menus.

On her website, Northcott says that “You might call it a memoir, with an attitude …  I’ve endeavored to bring to you the flavor, feeling, and authentic texture of mountain pack trips, remembering that the stories are collages of many trips and many people.”

Northcott’s musical career hasn’t faded into the background. She was a founder and longtime member of the nationally renowned, award-winning Western music group, the Horse Crazy Cowgirl Band. The group performed for 17 years before dissolving a couple of years ago. The group was the Western Music Association’s “Group of the Year” in 2015 and winner of multiple harmony awards.

The book and album were separate projects “but they do fit together,” Northcott said.

Northcott was a wilderness guide and cook for 33 years, and also taught for 34 years, most of that time in the Methow Valley School District. She was one of the collaborators in producing the annual Dollar Watch Cowboy Jamboree, a locally popular Western music and poetry fest, for 11 years.

Northcott also makes intricate, labor-intensive baskets woven from pine needles and decorated with all kinds of objects, many of them serendipitously discovered. The baskets are sold at several locations in the valley.

“A Cowgirl’s Life in the Mountains,” priced at $20, will be available at Confluence Gallery in Twisp and the Winthrop Gallery, or from Northcott through her website, www.lauraleenorthcott.com.