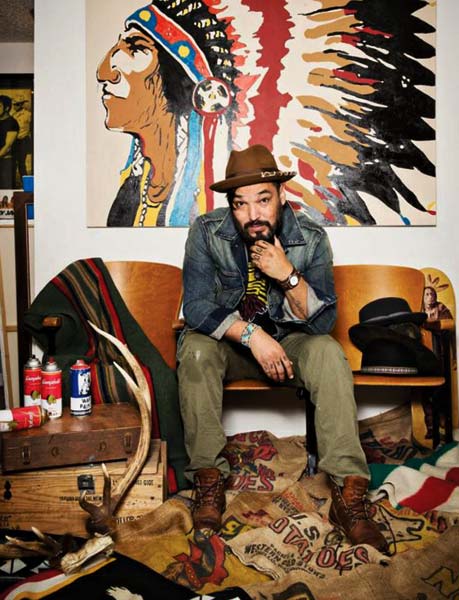 Community members of all ages and abilities are invited to join artist Steven Paul Judd to create a community art piece on Sept. 20.

A Native American (Kiowa-Choctaw) artist, Judd is known for art that combines iconic Native American images and lore with modern pop art. He works in a variety of art mediums from acrylics to Rubix cubes, and specializes in engaging communities in collective art pieces. He is known for writing and directing award-winning movies and music videos.

Judd’s visit to the Methow Valley is sponsored by Methow Arts, as part of a regional program that will take place during coming months called “Beyond the Frame,” which explores what it means to be native in North Central Washington.

Judd will begin the evening with a presentation, marked by his trademark humor, about his own racial identity and childhood quest for role models in pop culture. When he found very few role models, he began creating his own through his art. After speaking, he will lead participants in a community art project.

The evening will be held in the Bernard Hosey Shop at 191 Twisp-Winthrop Eastside Road in Twisp, from 5:30-7:30 p.m. Registration is required, and a donation of $5-$15 is suggested. Students are free. Register at info@methowartsalliance.org, or call 997-4004. Drinks and coffee will be available for purchase.

Methow Arts is a co-sponsor of “Beyond the Frame,” which focuses on the photography of Edward Curtis, who photographed native people in the early 1900s. He created 40,000 images and 10,000 audio recordings.

Curtis’ photographs will be brought to the Methow Valley in coming months as part of the project, which will include additional local events including films, discussions and in-school residencies.

“‘Beyond the Frame’ is a community-wide initiative revisiting the phonographs of Edward S. Curtis and sparking conversation on Native identity, race and resilience, art and culture,” said Amanda Jackson Mott, Methow Arts executive director. The project will culminate in the Methow Valley at the Arts Fest on July 4, 2019.