Fire crews, who already had their hands full with the Crescent Mountain Fire that’s burned 26 1/2 square miles in the upper Twisp River drainage, were challenged by powerful weather on Saturday (Aug. 11). The day began with an early-morning lightning storm that ignited 17 new blazes. A violent cold front whipped up winds over the fire in the afternoon.

Crews had already mopped up a few spot fires that escaped their fire line at War Creek after a weaker cold front moved through on Friday, said Jon Fox, incident meteorologist for the Southern Area Red Type 1 team that’s managing the fire.

Eighty to 100 lightning strikes hit the region from the Methow Valley to the Canadian border in the Saturday-morning storm, said Fox. The storm dropped small amounts of rain, but less than 1/10 inch, which doesn’t qualify as a wetting rain. “It won’t even go through the tree canopy,” he said.

Smokejumpers, air tankers, and engine and hand crews responded to the new fires, most north of Highway 20, over the weekend. The largest, the 1,800-acre McLeod Fire, which includes several smaller fires that were expected to merge, is burning about 8 miles north of Mazama and remains the greatest concern. The fire sent up a huge plume on Saturday night.

Because the McLeod Fire is near the scar from last year’s Diamond Creek Fire, on Monday crews started cleaning up those fire lines, including a hand line from Eightmile Road to Sweetgrass Butte. On Tuesday, crews were using mastication equipment to grind up small vegetation susceptible to spot fires.

Saturday’s lightning and wind followed several days of extreme heat, including a record-breaking 104 degrees on Friday at the fire camp in Winthrop, said Fox.

The cold front on Friday stirred up activity on the Crescent Mountain Fire. On Saturday, a more-intense cold front was accompanied by 20- to 30-mile-per-hour winds from the south and southeast, which shifted abruptly to equally fierce winds from the north and northwest.

The westerly winds were of particular concern for the Crescent Mountain Fire, because “it would have been in line with the Twisp River valley,” said Fox. Firefighters saw fire activity pick up dramatically and both air and ground crews had to be pulled off the fire for safety until the weather settled.

By Saturday night, crews were able to redeploy to the Crescent Mountain Fire, where they extinguished additional small spot fires, said Alison Koons, fire-behavior analyst trainee for the fire.

On the Crescent Mountain Fire, crews continue building and strengthening fire lines on the western flank at War Creek, about 16 miles west of Twisp, where there is the greatest risk that the fire could move into settled areas of Twisp River Road. The fire has been held 1.7 miles from the nearest residence for close to a week.

In addition to a fire line along the War Creek road and trail, crews extended protection on Monday by building bulldozer lines up to Scaffold Ridge in case the fire crosses War Creek, said operations section chief Jon Wallace in his Tuesday-morning (Aug. 14) briefing. Rolling rocks and dead timber have periodically slowed progress of fire crews on the War Creek line, he said.

Firefighters also set up sprinkler systems along the fire line at War Creek to keep things cool 24 hours a day and when fire crews are not there, said Wallace. They are still using night crews to take advantage of cooler temperatures and higher humidity in the valley to keep the fire in check. In fact, it’s hotter and drier at higher elevations at night, explaining why the McLeod Fire, at about 4,000 feet, has been so active overnight, said Koons.

Fire crews have completed another fire line on the northwestern edge of the Crescent Mountain Fire using the steep Slate Lake Trail. On Tuesday, crews were mopping up that area and cooling the fire’s edge to be sure the line would hold, said Wallace.

Last Wednesday (Aug. 8), the Crescent Mountain Fire burned upslope and merged with the Gilbert Fire on its north and northwest edge, but it has been holding well on Abernathy Ridge, said Wallace. Crews have been monitoring the progress of the blaze in that direction, including the risk that it could advance toward Wolf Creek and Winthrop. The probability of a spread in that direction is lower because of rocky ridges and old fire scars, he said.

Fire crews were prepping residences along the entire length of Twisp River Road by clearing brush, trimming trees and moving flammable materials away from houses. (See related story)  Crews installed sprinkler systems at many properties. They had completed that work to within half-a-mile of Twisp as of Tuesday. Crews have begun to assess the need for structure protection in conjunction with the McLeod Fire.

A high-tech resource on the fires is an unmanned aircraft systems (UAS) that can take infrared images of fires during the day or night. Crews used the UAS over the weekend to detect hot spots and spot fires in the Crescent Mountain Fire, and launched it on Tuesday to map the McLeod Fire.

The UAS, which can see through smoke but not through clouds, is particularly advantageous since it can be used when it wouldn’t be safe for a pilot to do an infrared flight, according to Gil Dustin, manned aircraft system program manager with the U.S. Bureau of Land Management.

As of Tuesday, there were 680 people assigned to the Crescent Mountain Fire, including support staff. On Tuesday, 165 were deployed to the McLeod Fire.

The Crescent Mountain Fire was started by lightning on July 29. It was the 14th-highest priority in Washington and Oregon when the Southern Area team arrived on Aug. 4, but had catapulted to second place by Wednesday (Aug. 8). The top priority is the Cougar Creek Fire, which has burned more than 31,000 acres near Entiat and resulted in mandatory evacuations.

The demand for firefighting resources because of the number of extreme blazes burning around the West remains huge, said Mike Dueitt, incident commander for the Southern Area team.

This week’s forecast is for warming weather with calm winds, said Fox. Over the next two weeks, the weather is expected to be hotter and drier than normal.

As of Tuesday morning, the Crescent Mountain Fire was 17,075 acres and 37-percent contained, meaning there is a fire line around that portion of the perimeter. The McLeod Fire has no containment. Crews completed a fire line around the 12-acre Doe Fire that started in Saturday’s storm and are mopping up that area, said Wallace.

Level 2 (be ready to leave) evacuation orders remain in effect for everyone on Twisp River Road west of Little Bridge Creek, 8 miles from town.

Many roads and trails are closed because of the fires, including Twisp River Road starting 8 miles west of town, and roads around Poorman Creek, Libby Creek, Gold Creek, McClure Mountain and Lookout Mountain Road. Areas around Eightmile and Goat Peak are also closed. Contact the Methow Valley Ranger District at 996-4003 for updated information.

In addition, the airspace above the Methow Valley is restricted to assure safety for firefighting aircraft.

People can sign up for emergency alerts through the county’s system at okanogandem.org. Click on the outline map of Okanogan County that says “Alert System.”

People who want to be notified about all incidents throughout the county can text “OKCOUNTY” TO 888777. They can also text ZIP codes to that number for particular towns if they want information about incidents in those areas only. 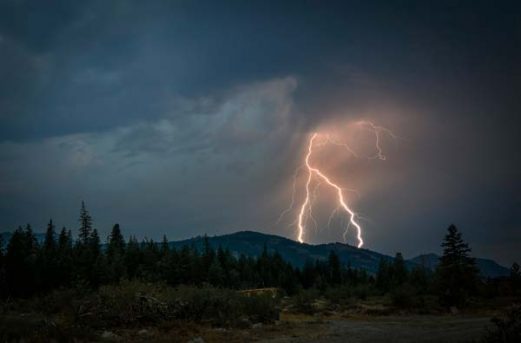 Photo by Steve Mitchell Between 80 and 100 lightning strikes hit the area in the Saturday-morning storm, sparking 17 new fires, including the largest on McLeod Mountain. 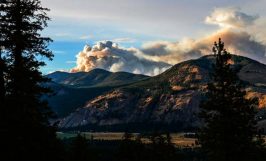 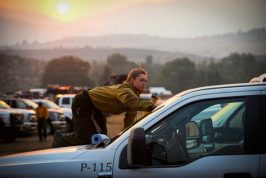 Photo by Steve MitchellMaintaining the equipment is an important part of fire fighting. 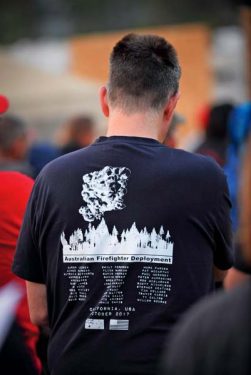 Photo by Steve MitchellFirefighters from as far away as Australia and New Zealand have come to support the effort. 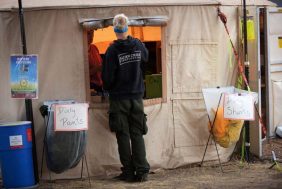 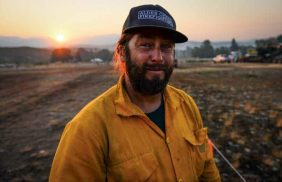 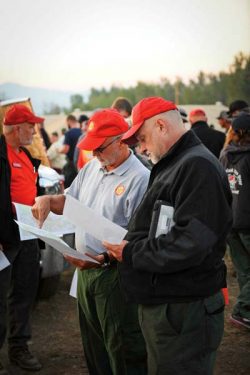 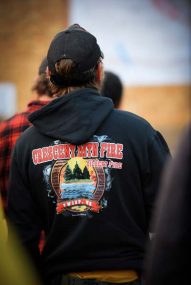 Photo by Steve Mitchell People are already starting to pick up mementos of the Crescent Mountain Fire. 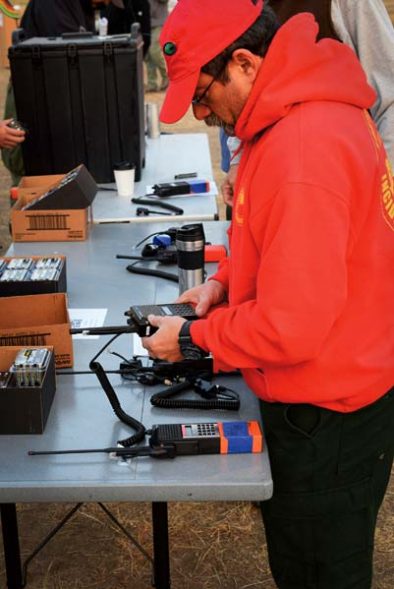 Photo by Steve Mitchell Fire crews picked up their radios at the massive fire camp at the Blues Ranch outside Winthrop. 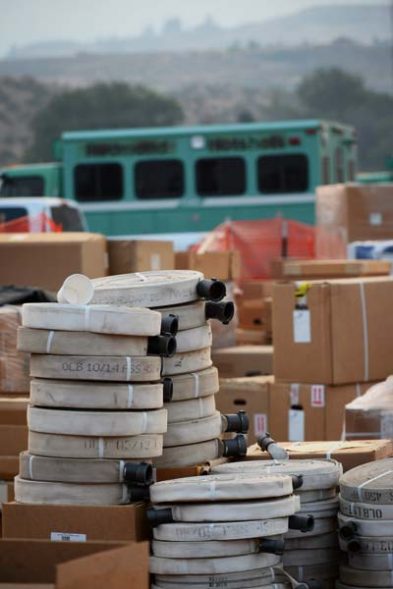 Photo by Steve Mitchell Thousands of feet of hoses have been set up on fire lines and on private property at hundreds of homes between the Crescent Mountain Fire and Twisp. 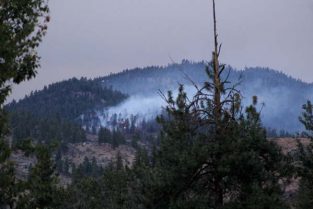 Photo by Don Nelson Smoke and flames were visible in the upper Chewuch drainage from one of the fires ignited by Saturday’s lightning storm. 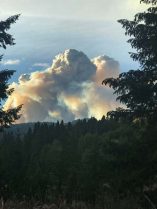 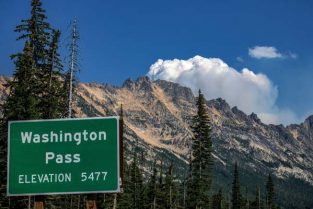 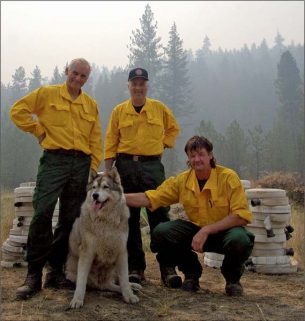 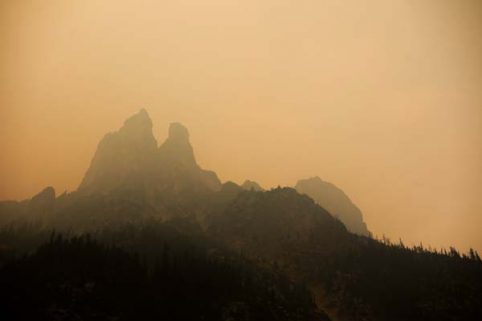 Photo courtesy of Jack LambertSmoke has filled up every aspect of the valley.