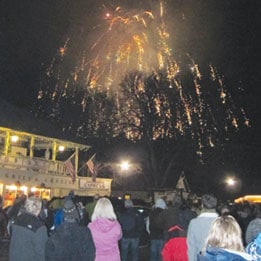 The end of the name “Christmas at the End of the Road” for the annual post-Thanksgiving celebration will be up for discussion once again at a Winthrop Chamber of Commerce meeting on Sept. 18 at Trail’s End Bookstore.

The meeting, described as a “brainstorming session” by the chamber, begins at 8:30 a.m.

The chamber board noted that Christmas at the End of the Road, which is largely viewed as a local celebration, is “the only chamber event where the town’s hotels are not full to capacity, and the current name is hard to market outside the valley.”

This year’s event will be called Winthrop’s Christmas at the End of the Road, the chamber board decided at an earlier meeting. If the event’s name changes more dramatically, it won’t be before 2018.

The chamber had to admit that it jumped the gun a bit last year, when it was announced at a chamber membership meeting that the name of the event would be changed to “Thanksgiving in Winthrop” or “Thanksgiving at the End of the Road” for 2016. The idea was to indicate that the event kicked off holiday activities rather than concluding them.

The chamber had to walk that announcement back, calling it premature, after some surprised backlash from the community.