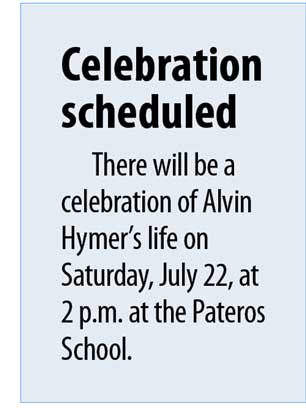 Family and friends of Alvin Hymer remembered him with affection and admiration — and secured some degree of closure — after Hymer’s body was recovered from the Columbia River about 4 miles south of Pateros on Sunday (July 9).

Hymer, age 74, had been trying to rescue his two dogs on July 1 when he fell into the Methow River near his home in Methow, according to Okanogan County Sheriff Frank Rogers. Hymer’s wife, Vickie Sadowsky, saw Hymer as he was swept downstream by the strong current. The Hymers’ dogs were later rescued, according to Rogers.

Hymer’s body was spotted Sunday in the middle of the Columbia River by someone jet-skiing on the river, according to Okanogan County Coroner Dave Rodriguez. Two sheriff’s deputies were able to recover the body before Rodriguez arrived. The cause of death was drowning, said Rodriguez.

Search-and-rescue teams from the Okanogan and Chelan county sheriff’s departments, along with many volunteers, spent eight days trying to locate Hymer. The teams used helicopters and rescue swimmers to scout pools and holes along the river, said Rodriguez.

“The hole at McFarland Creek is always a tricky hydraulic spot,” said Rodriguez, a rescue diver who was on hand to search at depth if the swimmers found any sign of Hymer. “You get swirled around and spit out—it’s not an easy place to swim.”

Even in the Columbia, the current is swift, particularly at this time of year. “With one foot in the current, before you know it you’re ¼-mile down the river,” said Rodriguez.

Hymer grew up near Brewster and moved back to the area about two decades ago after a career that took him to Colorado, according to his long-time friend Bev Zwar of Methow.

When Hymer returned to the lower valley, he and his then-wife, Meg, renovated a former dentist’s office in Pateros to create the SweetRiver Bakery. To turn out the crusty breads they envisioned, Al and Meg transported a Spanish brick oven from Buffalo, New York, to their new venture in Pateros, said Zwar.

Since it opened in 2002, the bakery has become a community gathering place, adding outdoor music and pizza in the evenings to their artisan breads and baked goods. Hymer still owned and managed the bakery along with his son Alex.

“Hymer was a man of values and was dedicated. He was always active and vocal,” said Zwar. Hymer campaigned tirelessly for Ashley Thrasher in last year’s race for county commissioner, she said.

Hymer cherished adventure, on the land, the water, and in the air. He was an experienced kayaker, having learned from local tribal members when he was growing up, said Zwar. He was also a pilot — Zwar recalled a spontaneous four-day trip to Napa Valley with him.

Hymer’s lifetime love of horses was one thing that drew him back to the area, said Zwar, who shared many rides with him in the backcountry. “We spent many hours riding — and talking about what to eat when we got back,” she said. He was dedicated in training his horses and traveled around the country to learn more about dressage.

Lorah Super also explored the hills on horseback with Hymer near her home in Methow. Super first met Hymer through a group she chaired that advised the Okanogan County commissioners and planners about concerns of lower valley residents. The Lower Valley Advisory Group was one of the most committed of the neighborhood groups set up around the county during the update of the comprehensive plan, she said.

“We were looking for a person of stature in the community [to serve on the group], and he was one of the first names who came up,” said Super. “He was a big contributor to the group — he had lots of public policy experience. He was like a classic pillar of the community.”

“Al was among the kindest and most genuine people I’ve ever known. He was an advocate for protection of the beauty and rural atmosphere of the lower Methow Valley and an active civic-minded citizen,” said Isabelle Spohn, a friend who worked with Hymer on land-use issues.

“His passing has brought a deep sense of sadness; he is greatly missed by those who knew him and treasured his friendship,” said Spohn.

“It’s a huge loss. Al was a terrific guy. We had a lot of adventures with him. I’m glad he was a part of our life,” said Zwar.