For Rayma Hayes, Little Star
Montessori was an act of love

Children were the center of the universe for Rayma Hayes, who created a world where childhood is filled with love and encouragement.

That world is Little Star Montessori School in Winthrop, where more than 2,000 Methow Valley children have received the gifts of Hayes’ affection, attention and acceptance over the years. 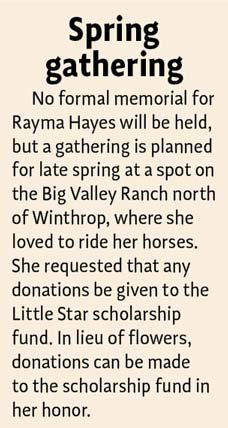 One of those children was Dani Reynaud, who was a student in Little Star’s first preschool class in 1982 and is now the school’s director and parent of a Little Star student.

“The beautiful thing about Rayma is she had this ability to make every person feel like the most important person. She was so genuine, in the moment, with that connection. That was such a gift to so many children, and so many parents,” Reynaud said.

“She also had this incredibility ability to see every child for who they are without judgment. There was no good or bad, it was just celebrating children for who they are,” said Reynaud.

In the weeks before her death on March 27, Hayes was celebrated by hundreds of people who sent emails, letters and photographs, or paid visits to her home to express their love and gratitude to her.

She was diagnosed with brain cancer in December and was treated with radiation to shrink swelling temporarily, which gave her some time to spend with her husband, John, family members and friends.

It also gave her the opportunity to hear from the many people she has touched over the years, said John Hayes.

“All these people related stories to her. Rather than saying something about her after she died, they got to say it to her directly,” he said. “It was a very good way to deal with it.”

Teresa Castner, a friend of 49 years, read the messages to Rayma Hayes, and said there were common themes throughout.

“Every person said almost the same thing about the impact she had, and how she made them feel special and loved, and was accepting of them as a person,” said Castner.

“For every letter that I read to her, she remembered every student and all the stories, and she had more stories, and would tell a story about each person,” Castner said.

“I want to thank you for everything you have given me: love, curiosity and courage,” wrote a former Little Star student. “I am so grateful for what you have taught me and have taught many of my closest friends — to learn, to be open, thoughtful, gentle and loving … you are an inspiration to me.”

Another sent a photo of her first day as a Little Star preschool student, and wrote: “Not only did you shape my ability to be generous and patient with others … but you taught me that being sure of myself and my individuality was something to be proud of.

“The warmth and support that you have brought to generations of growing souls … guarantees that your light will be shining through all of us for years to come.”

A song often sung at Little Star Montessori School was “This Little Light of Mine (I’m gonna let it shine),” and more than 100 people sang the song to Hayes at a Valentine’s Day celebration in February held at the school in her honor.

Hayes was able to attend the event while seated in a car driven by her good friend Deborah DeKalb, a former Little Star teacher who is principal of Liberty Bell High School.

“Rayma was always coming from a place of love. She taught us all how to be good parents, teachers, loving people,” DeKalb said. “All the stories she told the children were so heartfelt.”

Hayes also had an extraordinary ability to understand and relate to children, DeKalb said.

“She had intuition and insight into human nature and children. She’s a good listener. She not only listens with her ears, but with her heart,” DeKalb said.

“It all just comes back to love, knowing that life is precious and to spend every day sharing that love.”

“Rayma was a mother figure,” said Taylor Woodruff, a former Little Star student who is now in college in California.

“She was just warm and affectionate and just really genuinely cared about the well-being and success of all the kids at Little Star. She created a safe environment in which it was fun and easy to learn,” Woodruff said.

Woodruff, a cross-country runner, wanted to help other children attend Little Star, so he raised money for several years by seeking pledges for running and donating the money, about $13,000 total, to the school for scholarships.

Hayes not only loved her children, but she also had absolute faith in them and their abilities, said Kim Claussen, who has taught at Little Star for 25 years.

“She met children at their level. She expected of them what they knew they could do. They were willing to work because they knew someone believed they could do it,” Claussen said.

“As a child going to Little Star, the thing I really remember was the flexibility,” said Mariah Clements, a former student who came back to Little Star this year as a kindergarten teacher after receiving her Montessori teaching certification.

“She allowed me to explore whatever I was interested in, allowing us to go in depth if we were interested in something,” said Clements, who seeks to carry on that tradition in her own teaching.

As she did for many students, Rayma stayed in touch with Clements over the years, and continued to encourage her to pursue her interests.

When Clements graduated from a Montessori institute four years ago, “Rayma sent me a card saying she was so excited that one of her children decided to go into Montessori education, and sent me earrings with stars on them.”

Musician and songwriter Luc Reynaud, in a TEDx talk available on YouTube, described how Hayes encouraged him to be curious and bold when he was in kindergarten.

Reynaud told her that he wanted to draw the earth, and Hayes asked if perhaps he might also want to draw the moon, and the sun, and the solar system.

When he said yes to each idea, Hayes responded, “‘Paint the entire universe, and don’t stop until you’re finished, and I will help you.’” Hayes then unrolled a long sheet of paper across the floor of the classroom for Reynaud to draw the universe.

“That seed that Rayma planted, and that way of being, I see as a monumental moment — that notion of taking an idea as far as it can possibly go, having no roof or limit … allowing [yourself] to get swept up in the magic,” Reynaud said.

Rayma and John Hayes traveled and lived around the world, including Spain and the Bahamas, before settling in the Methow Valley. They raised two boys, Daniel and Pablo, and Rayma gravitated to children wherever they were, John said.

“When we lived on the islands [Bahamas] I was doing building projects … She volunteered to help in the schools. She would use part of my budget to buy art supplies,” John Hayes said.

Her love of children and interest in education led to a Montessori teaching certificate and then to the founding of little Star Montessori School 35 years ago with several committed community members, including Sandy Welfelt, who still teaches at the school.

The new school struggled financially at times, John Hayes recalled. “At first Little Star couldn’t make its payroll. Rayma would write a check from our account,” he said. The school has steadily grown and become an integral part of the Methow Valley community.

In the mid-1980s, Hayes authored and illustrated a book called “Maria Montessori: A Biography for Children,” that has been translated into seven languages.

Hayes taught full-time for many years, primarily kindergarten. Among other things, she was known for creatively combining art and cooking, for writing and producing elaborate school plays with costumes and sets, for an annual Day of the Dead celebration, and for helping children learn to resolve differences among themselves.

“She fostered peaceful conflict resolution,” Clements said. “Little Star students have strong traits of being able to resolve conflicts and talk about our emotions and feel comfortable with that. She’d say, ‘Ask a friend before you ask an adult.’”

In recent years Hayes took on the role of “educational director” for the school. That allowed her to spend time in all the programs — toddler, preschool and kindergarten — to provide support to teachers.

“She stepped away from teaching full-time and could be our spiritual guide,” said school director Dani Reynaud.

In addition to children and teaching, Hayes also loved her horses and dogs, Reynaud said.

“She would come in to school with her barn boots on and hay in her hair after feeding the horses. And she’d come and sit on the floor in my office and share with me her thoughts she’d had about students, or the classrooms,” Reynaud said.

The students and staff began referring to her as “Grandma Rayma,” Reynaud said. Some people also call her “a fairy godmother,” because of her generosity and compassion for people of all ages.

“Rayma’s ability to see the unique potential of every individual — child or adult — was the gift she gave to us all,” said Florence Sawyer, a Little Star teacher whose children attended the school.

“Clear-sighted, without judgment or sentiment, her steady support, encouragement and humor have allowed so many to shine,” Sawyer said.

“People came to her for all kinds of advice, including relationships,” Claussen said. “I remember her being so matter-of-fact. She’d say, ‘Love doesn’t have any reasons.’ The advice she gave to women was, ‘Always have your own bank account.’”

Before her death, Hayes told Little Star’s teachers that she had faith that the school would continue to thrive and grow.

“I feel like I have done what I came to Earth to do — Little Star — and can leave with a light heart,” she wrote in a message to teachers.

When doctors told her she had incurable brain cancer, “Rayma totally accepted her diagnosis,” said Castner.

“She has led a fulfilled life. She did everything she wanted to do. The school was the most important thing to her, and the kids. She was rock solid. We were all falling apart around her when she was dying. She wasn’t afraid, she was at peace with it.”

Castner said she was honored to read the many letters and emails to Hayes in the final weeks, and to realize how far-reaching Hayes’ impact is.

“My heart was so filled with joy and love. I think she was very humble about it when I was reading to her. It’s healing … to show what love you had for that person, how they changed your life,” Castner said.

“She walked the walk of being a good person. She embraced so many things and wanted her children to be compassionate, be little activists, fight for things that are right and fair,” Castner said.

“And she planted those seeds in all of us of love and compassion and acceptance. There’s a rippling effect from what she’s done. In my opinion, I feel she has changed the world … through her children at the school,” Castner said.

“She knows that she did good, and that’s one of the reasons she’s OK with leaving. She has no regrets. May her spirit live on through all of the children.”