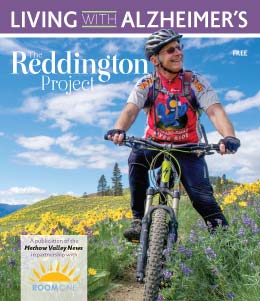 Donni Reddington, the daughter of Don and Ginger Reddington, is planning a 10-day motorcycle trip around Washington state with her dad this summer to raise awareness of Alzheimer’s disease, and she’s looking for help with expenses.

Donni Reddington has created a gofundme.com account — www.gofundme.com/ride4alzheimers — to help support the trip.

Don Reddington was the subject of “Living With Alzheimer’s: The Reddington Project,” a special magazine published last year by the Methow Valley News. He was diagnosed with Alzheimer’s three years ago, and has been an outspoken proponent of acknowledging and living with the disease.

“He wants to help everyone affected by this disease to understand and accept, instead of rejecting and hiding from it in shame and fear,” Donni Reddington said on the gofundme.com site.

This summer’s trip will be by way of a motorcycle with a sidecar. The trip will start July 4 in Twisp, during the town’s Fourth of July parade. Stops are planned in Bellingham, Seattle, Olympia, Yakima and Spokane, finishing at the Pybus Market in Wenatchee.

“In each of these communities, we will attend an organized Alzheimer’s rally where families and those living with Alzheimer’s can gather to help spread awareness and help find an end to Alzheimer’s,” Donni Reddington said on the gofundme.com site. “Together, riding side by side around the state, my dad and I will make a powerful statement about the affects of Alzheimer’s, the choices open to everyone affected by the disease and the importance of living an enjoyable and respected life.”
Money raised on the site will be used for gas, food and lodging. Donni Reddington has set a fundraising goal of $7,500; anything raised over that amount will go to the Washington State Alzheimer’s Association.

Copies of “Living With Alzheimer’s: The Reddington Project” are available for free at the Methow Valley News office on the TwispWorks campus. Copies can also be ordered for mailing. There is a $5 handling fee, plus the cost of postage. Email frontdesk@methowvalleynews.com or call (509) 997-7011 for more information.

To see a digital version of the publication, go to www.methowvalleynews.com and click on the cover image.