Gloomy outlook for some of the endangered species 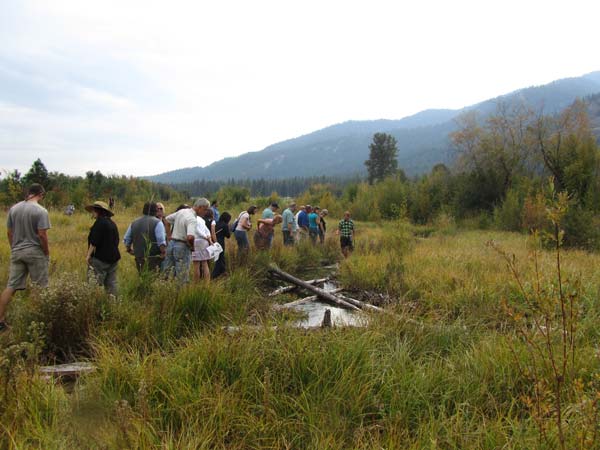 A state report tallying the achievements of almost 20 years of salmon recovery gives this region high marks for habitat and land protection, but paints a gloomier picture for endangered fish, with spring Chinook “getting worse” and steelhead “not making progress.”

The 2016 “State of Salmon in Watersheds” update, released by the Governor’s Salmon Recovery Office, concludes that “salmon are in trouble.” The biennial report evaluates projects throughout the state aimed at rebuilding populations of endangered fish and their habitat.

In the Upper Columbia region, which includes the Methow watershed, spring Chinook were listed as endangered, and steelhead as threatened, when their numbers plummeted to historic lows in the late 1990s.

While the report’s findings may look bleak, it focuses on data from the past five years, when salmon faced poor ocean conditions, drought and wildfires, according to Greer Maier, the science program manager for the Upper Columbia Salmon Recovery Board.

The report looks at eight regions across the state, with different fish species, varied habitats, and locally tailored recovery plans. All the numbers cited in the report are for wild fish, which are considered key to recovery.

“It’s complex. You have to recognize that fish produced in the Methow Valley have to leave the Methow, go down the Columbia to the ocean, and come back,” said John Crandall, the Methow monitoring coordinator with the Methow Restoration Council. “It’s a big world out there, with pressures outside this watershed.”

Local salmon populations suffered in the past three years from an ocean phenomenon called “the blob,” in which a huge area of warm water persisted off the coast, said Maier. The warm water seems to have lured seals and sea lions north from California.

These marine mammals took a big toll on spring Chinook, said Maier. Scientists estimate that 35 percent of the Methow spring Chinook were lost to predators in the 150 miles between the coastal estuary and Bonneville Dam.

The warm ocean water also decreased the food salmon eat while at sea.

Maier expects we will see negative effects from the blob over the next several years as the first adults from this generation start returning to spawn, said Maier.

On the other hand, the report found promising habitat changes in this region, especially in headwater streams such as in the Methow watershed. The report also pointed to excellent riparian conditions.

One of the primary goals of habitat restoration in the Methow watershed has been to increase the growth of juvenile fish, said Crandall. Larger fish will be better prepared to survive once they leave here, since they are stronger and can swim faster.

Indeed, the state report found that juvenile Chinook and steelhead had increased in this area.

“That’s the hard part about salmon recovery — you have to wait and see how returns will be,” said Maier.

In the Upper Columbia overall, restoration teams have removed 120 barriers, enabling fish to reach more than 225 miles of new habitat. They have also restored almost 70 miles of stream habitat.

Where barriers have been removed, fish quickly colonized new upstream areas. Still, it takes years before their progeny return to spawn there, said Crandall.

Streams can provide really good habitat at some times, but not at others, said Crandall, pointing to the effects of fires and floods. Beyond that, ocean conditions can mask improvements in individual watersheds. “It’s dynamic — it takes a while to play out,” he said.

While adverse conditions in the past few years have led to lower returns — particularly after really good numbers between 2010 and 2012 — there are consistent improvements since the 1990s, said Maier.

The raw numbers of spawning wild fish may seem discouraging, but recovery aims to ensure that some salmon return even in tough times, said Maier. If salmon withstand poor conditions, their populations will rebound, she said.

While the report takes a snapshot of a rough period, the long-term trend for steelhead recovery is positive, said Maier. For spring Chinook, which are listed as endangered, it is stable.

Overall, there are two to three times of fish from both species returning to the Upper Columbia to spawn than there were 20 years ago, said Maier.

“To me, it says salmon recovery is a success, compared to where they were in the ’90s,” said Greer.

While the report tries to quantify the effect of salmon recovery efforts, it notes that monitoring and evaluation programs have never been fully funded.

The Upper Columbia salmon recovery plan was approved in 2007. “We’re only 10 years into a 30-year recovery plan, so we won’t see benefits for a while,” said Maier.

Since then, the Upper Columbia region has spent almost $90 million for habitat restoration and for protection, such as conservation easements and land acquisition, said Greer. That doesn’t include money spent on improvements at dams, on hatchery programs, nor on wages.

The state report also tallies other effects of salmon recovery. It calculates that every $1 million spent on watershed restoration creates an average of 17 jobs and $2 million in economic activity. Eighty percent of the grant money stays in the county where a project is located.

“Habitat work in the Methow watershed won’t cure all ills,” said Crandall. “We have to think holistically about the habitat effects on fish.”