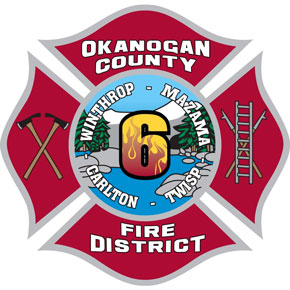 No change in protection services for town if approved

By Don Nelson and Ann McCreary

Other than an increase in their total property tax bills beginning in 2018, Winthrop residents won’t see many changes in fire protection if they support a proposal on the Feb. 14 special election ballot that would annex the town into Okanogan County Fire District 6.

The level of fire protection services and tax rates for Winthrop residents would remain the same as they are now under an existing contract between the town and the fire district that continues through the end of this year.

In 2018, when the proposed annexation would go into effect, town residents would see their property tax bills increase by 64 cents per $1,000 of assessed evaluation, the same rate that District 6 now assesses its rural residents and would continue to assess if annexation proceeds, according to information provided by the Town of Winthrop.

Voters living in Winthrop and voters who live within the fire district boundary each must, as separate entities, approve the annexation proposal by a simple majority for it to take effect. If either of the jurisdictions rejects the proposal, the annexation will not take place.

Failure of the annexation proposal would mean the town would have to negotiate a new contract with the district for continued fire protection.

Residents of Twisp, which also contracts with Fire District 6 for fire services and is not part of the district, won’t be voting in the Feb. 14 election.

Winthrop’s existing fire services contract costs the town $50,375 a year. If annexed to the district, the fire district levy would raise about $64,000 for district operations, according to information provided by the fire district.

However, as part of the annexation agreement, the district would pay the town $10,000 a year for use of the fire hall on Englar Street in Winthrop, so the overall financial impact for Fire District 6 would be only a few thousand dollars more in revenue, according to the district. The district would also continue to use the town’s fire truck, which would remain the property of Winthrop, as part of the annexation agreement.

Cody Acord, District 6 interim fire chief, said that “for the district it’s pretty much a wash” financially, as a result of the $10,000 yearly payment for use of the Englar street fire hall.

There will be an informational open house about the annexation proposal on Thursday (Feb. 2) from 6 to 7 p.m. at the Winthrop Barn. Town and fire district officials will be on hand to answer questions.

Employees and board members of the town and fire district are prohibited from campaigning for or endorsing the annexation proposal. The town and district have each produced and distributed informational fact sheets about the election and its potential effects.

A question that has come up at Winthrop Town Council meetings is whether the town would reduce its property tax rate by the amount that the fire district will assess, if the annexation is approved.

Currently, the town collects less in property taxes than it pays for the fire protection contract, which is supported out of current operating expenses, Winthrop Mayor Anne Acheson said. Nearly 80 percent of property taxes the town collects are devoted to streets, and about 20 percent to current operating expenses, so lowering the town’s assessment would reduce the property tax funds available for street repairs and maintenance, Acheson said.

“If we reduce it, there will be less money for streets because of the way funds are distributed within the budget,” Acheson said.

Acheson said that other critical town needs might be met with funds that are no longer used for a fire district contract. Those include necessary repairs to Town Hall, which has structural problems; a permanent location for the marshal’s office, which is temporarily housed in another building because of flooding in the Town Hall basement; or creation of a rainy day reserve fund for emergencies. The town does not have a reserve fund now.

Specific uses for those funds would be defined in the town’s 2018 budget, Acheson said.

Both Winthrop and Twisp had their own municipal fire departments in the past, before eliminating them and contracting with Fire District 6 for fire protection services.

Discussion of a possible annexation has been an on-again, off-again topic in recent years for both towns, as they have periodically renegotiated fire service protection contracts with the district. At times those negotiations grew testy.

Talks in Winthrop about bringing an annexation proposal to a vote began under the administration of former Winthrop Mayor Sue Langdalen, who resigned last year when she moved out of the community.

“It was already pretty well down the road when I took over,” said Acheson, who was appointed mayor when Langdalen left. Acheson had been a town council member.

Not part of the annexation discussion, but looming in the background nonetheless, is the current status of the fire district’s efforts to construct a new fire hall.

The district purchased 5 acres in the Horizon Flats neighborhood in Winthrop about six years ago, and proposed building a 12,000-square-foot station there at an estimated cost of about $2.4 million.

The station was intended to replace the leased fire hall in Winthrop that district officials say is too small and inadequate to safely accommodate equipment and firefighters.

A property tax levy increase to fund the new station was rejected by voters in 2014 (Twisp and Winthrop residents did not vote in that election). Plans for the new station were shelved last year after months of debate and criticism from some residents of the district, and after construction bids were more than the district could afford.

Critics said the proposed station was too large, elaborate and expensive, and some people said Horizon Flats was not a good site because it is adjacent to a residential neighborhood and is on a hill with a curving road that could be difficult to navigate in winter.

Concern about the district’s handling of the fire hall issue, and the board’s perceived indifference to public concerns, was partly behind the 2015 election of Les Stokes to the board of commissioners, replacing long-time board member Roy Reiber.

Ballots for the Feb. 14 special election went into the mail on Jan. 26, the Okanogan County Auditor’s Office said in a press release. If you have not received your ballot by Wednesday (Feb. 1), call the auditor’s office at (509) 422-7240.

The auditor’s office, at 149 Third Ave. N. in Okanogan, is open Monday-Friday from 8 a.m.–4:30 p.m. You can drop off voted ballots and obtain replacement ballots.

Drop boxes will be open until 8 p.m. on Feb. 14. The Methow Valley drop box is in front of Twisp Town Hall. If you mail your ballot, sufficient first-class postage (49 cents) must be attached and it must be postmarked by the day of the election.

If you are not currently registered in the state of Washington, you can appear in person in the auditor’s office until Monday (Feb. 6) and register to vote in the Feb. 14 election.