Yes, that’s a coffee bag — although probably unlike any you’ve seen before.

Blue Star Coffee Roasters recently began stocking retail shelves and its store in Twisp with the new bags, which replace the paper bags Blue Star has used for years.

The new bags are shorter, wider and made with “high-barrier” foil, which means they keep the beans fresh.

Because the bags have a wide, flat bottom, they won’t tip over easily and spill the beans. They also have a re-closable zip opening — which means no scissors required, and no struggling to seal the bag with those little black binders. 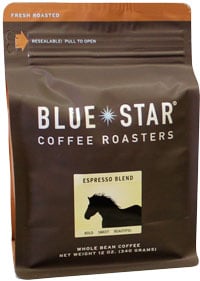 Aside from the new look’s marketing potential, the revamped bags offer important efficiencies in the production process, according to Blue Star owners Dan and Meg Donohue.

The bags come pre-printed with Blue Star’s familiar labeling. And the packaging process is much more streamlined thanks to a newly acquired machine that seals the bags and simultaneously stamps the roasting date on them.

Dan Donohue said that each retail size, 12-ounce bag had to be handled several times during the old packaging process. That “bottleneck in production” has been eliminated, he said.

Meg Donohue said that they haven’t been able to find recyclable materials that work for coffee packaging, but the new bags are lighter and use less material.

“We’ve been thinking about [new packaging] for a couple of years,” she said. “This is the best we could find, with a low carbon footprint and efficiency in production.”

The Donohues have been rethinking the bags’ design for about year. The new packaging only became available recently, Meg said.

“The only thing that wasn’t negotiable was our labeling,” she said. “We want people to recognize their coffee.”

Response to the new packaging, which was introduced first to Blue Star’s wholesalers, has been positive, the Donohues say.