Are black widow spiders spinning out of control in Okanogan County? 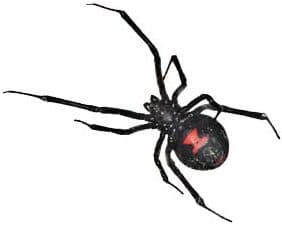 Arachnophobes are advised to stop reading now. It appears that this year has produced a bumper crop of black widow spiders in Okanogan County.

“There’s no comparison. I’ve been in business over 40 years. I’ve never had this many calls for black widows,” said Russ Brantner, owner of Mid Valley Pest Control in Omak.

“In mid-summer it went to four or five calls a day. It’s starting to taper down now,” he said.

The Methownet bulletin board hosted a conversation recently among people who reported finding a proliferation of black widows on their properties. A Methow resident said a new construction project was “covered” in the spiders, and as many as 40 were seen during a two-week period in August.

Here at the Methow Valley News office at TwispWorks, five black widows have been found inside the office, and dispatched.

Brantner said calls about black widows are coming from all around Okanogan County, and he has wondered what role Mother Nature plays in the apparent population boom.

“I thought maybe it was the Carlton Complex fire. Black widows seem to be in burn sites. But they’re everywhere. We’re getting jingles from downtown areas that were completely untouched by fire,” Brantner said.

“We’re getting into a … global warming situation. The temperatures don’t get quite as cold in the winter months. Whether that’s coming to fruition with more spider activity, I don’t know,” he said.

Brantner said calls from customers about yellow jackets have also been higher than normal this year.

Black widows are shiny, black spiders and the females have a distinctive red hourglass shape on the underside of their abdomens. The venom of a black widow is reported to be 15 times stronger than a rattlesnake’s, according to National Geographic.

In humans, black widow bites can bites produce muscle aches, nausea and a paralysis of the diaphragm that can make breathing difficult. However, the bite is rarely fatal in healthy adults, according to National Geographic.

Connie Mehmel, an entomologist with the U.S. Forest Service, said black widows lay their eggs in late fall and the baby spiders over-winter and mature in the spring and summer.

“This is the time of year when you would see the most of the adults. It’s probably the season,” Mehmel said. Most spiders only live a year, although some adults survive over the winter, she said.

Black widows spin webs that are messy and irregular looking. “If you see webs or egg sacs you can vacuum them up and then remove the bag. Get them out before they over-winter,” Mehmel said.

“They’re easy to squash,” Mehmel added. “But it’s annoying, the pop they make.”