The memorials are reminders of commitment and sacrifice

Firefighters, U.S. Forest Service staff and community members had an opportunity for personal and shared reflection about the lived legacy of Tom Zbyszewski, Rick Wheeler and Andrew Zajac, the three firefighters who died in the Twisp River Fire one year ago.

The U.S. Forest Service held a formal tribute on the one-year anniversary of the firefighters’ deaths that also honored Daniel Lyon, their colleague who was seriously burned in the fire on Aug. 19, 2015. 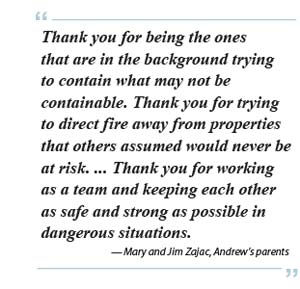 Before gathering for the ceremony, the Methow Valley Ranger District encouraged people to visit two memorials that pay tribute to the firefighters — a new reflection site at the ranger district office and a firefighters’ memorial at Mack Lloyd Park in Winthrop.

At the reflection site, high on a hill at the ranger district office in Winthrop, flowers had been placed beside the plaque honoring the firefighters. During the dedication of the site earlier this summer, each firefighter’s family planted a tree — two crabapples and two chokecherries — that will serve as a living memorial.

The site also includes a copper weathervane by local artist Jessica da Costa. The weathervane, in the form of an eagle, incorporates melted aluminum from the engine the firefighters were driving. (See related story Reflection site encourages quiet contemplation.)

People also paid tribute at the memorial erected by a group of community members in Mack Lloyd Park, which honors all firefighters who have died in wildfires in the Methow Valley. With the three new names, the plaque on the statue now honors the sacrifices of 20 firefighters going back to 1929.

In the year since the Twisp River Fire, the agency has resolved to take a different approach to wildfire, said Jim Peña, regional forester for the Pacific Northwest Region. Administrators are talking to all Forest Service employees and their colleagues about how to put life first as they carry out their mission, he said.

Lessons from the Twisp River Fire will make a tremendous difference in how the Forest Service approaches fire — particularly where people live in close proximity to wildlands — to ensure that all firefighters come home every day, said Peña.

Mike Williams, the supervisor of the Okanogan-Wenatchee National Forest, read a letter from Mary and Jim Zajac, Andrew’s parents. Their words — excerpted here — eloquently expressed the gratitude, respect and forward-looking inspiration of everyone who was there to honor the fallen:

“The work that you do is important work that most people in this country are not aware of. … Thank you for being the ones that are in the background trying to contain what may not be containable. Thank you for trying to direct fire away from properties that others assumed would never be at risk. … Thank you for working as a team and keeping each other as safe and strong as possible in dangerous situations.

“This day marks a full year since the fire. … We will spend this day camping on our family forest land in northern Wisconsin among the thousands of trees that Andrew helped plant. I pray that you too will find peace for your soul among the trees today.”

The ceremony ended with a moment of silence outside the barn at 3:02 p.m., the time when the Forest Service believes the fatal burnover occurred. Lights flashed on two Forest Service engines as the tribute was announced over the dispatch system.