Loup Loup Ski Bowl is beginning an ambitious project to clear out the dense tangle of downed trees, brush and other understory material that clutters the forested areas between the resort’s ski runs. 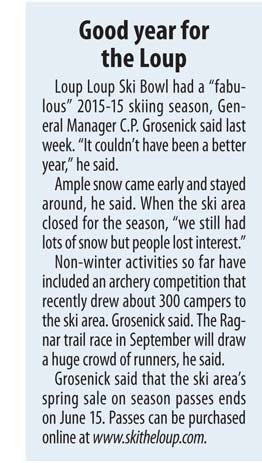 Loup Loup General Manager C.P. Grosenick said work will begin this summer on clearing the areas, which he said are essentially impassable, but the project will likely take several years.

The work is being done under the auspices of the U.S. Forest Service, which allows the ski area to operate under a special use permit.

Jennifer Zbyszewski, recreation program manager for the Methow Valley Ranger District, said the work will be carried out by volunteers, but the Forest Service will periodically check on its progress. The project is an element of the South Summit II Forest and Fuels Project Environmental Assessment. “We will make sure it’s done right,” she said.

Grosenick said a major goal of the project is to remove fire fuel from the forested areas. “The last two years of fires have had an impact,” he said. The Carlton Complex Fire of 2014 came close to but did not damage the ski area.

“Our No. 1 concern is that if it [a fire] got going in those stands, it would just take off. There is so much fuel,” Grosenick said.

“We want to educate people so they are aware of the need” to reduce potential fuel, he added. “There are some incredibly dense areas with a lot of downed trees, right between the ski runs.”

Clearing out the clutter will also make for a better skiing experience, he said.

The cleared material will be stacked in piles which the Forest Service will burn, Zbyszewski said.

“They’ve got a lot of ground to cover,” she said. “This is a good time to start a project like that.”

“Our plan is to begin this summer and go for as long as we can,” Grosenick said. “This is a long-term effort, and it will take the community to help us get it done.”

Grosenick said the ski area applied for grant funding for the project but was initially turned down. Loup Loup will likely pursue other grants. Without help, he said, the ski area can’t afford to hire a contractor so will rely on volunteers.

If interested, contact Grosenick at (509) 557-3401 or email info@skitheloup.com. Volunteer work can be applied toward earning a season’s pass at the ski area, Grosenick said. “Our standard is 50 hours of work to earn a pass.”

Work this summer will take place between Bulldog and Hughes runs, Grosenick said.

The South Summit II Project encompasses about 50,000 acres of Forest Service land. About 70 percent of the project area burned during the Carlton Complex Fire. The forest restoration project was under consideration prior to the fire and was subsequently modified.