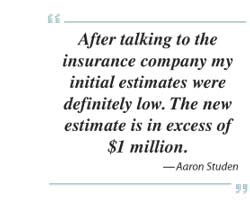 Twisp Police Chief Paul Budrow has interviewed about 15 people as part of his investigation into the arson fire at the Twisp River Pub, and said he expects to interview as many as 60 people before he is done.

While he is moving ahead on conducting his part of the criminal investigation, Budrow said he is waiting for the fire investigator to complete his report, and waiting for the Washington State Patrol crime laboratory to analyze evidence sent to the lab from the fire scene.

Brian Brett, Douglas County fire marshal, is leading the investigation into the cause of the fire, which severely damaged the pub in the early morning hours of Feb. 29. Budrow said Brett was almost done writing his report on the pub fire, but was called to investigate “a couple other major fires” and so his report has been delayed.

Once that report is available, Budrow said he would provide it to a detective from an outside agency who will assist Budrow with some interviews, including talking with pub owner Aaron Studen.

Because Studen is a member of the Twisp Town Council, Budrow asked a detective not affiliated with the town to interview Studen and potentially other people in order to avoid any appearance of influence or conflict of interest.

Getting results back from the state crime lab is likely to take a long time, because the fire, although considered arson by investigators, resulted only in property damage and no injuries or loss of life, Budrow said. Therefore, work on evidence related to the pub fire will be given lower priority for processing than evidence in other crimes involving death or injury, he said.

“Because it’s property and not life, we keep getting bumped,” Budrow said.

It could take months or more than a year for the crime lab to complete analysis of the evidence, which included a hard drive from the restaurant’s video surveillance system, he said.

Studen said he is also waiting — in his case for word from his insurance company, Mutual of Enumclaw, before deciding what his next steps might be. Mutual of Enumclaw hired its own investigator in March to conduct an independent investigation of the fire.

“I don’t know what I’m going to do until everything is worked out,” Studen said Monday.

Studen had initially guessed that damage to the building amounted to “several hundred thousand dollars,” but said this week that he had underestimated the cost to rebuild, if that is what he decides to do.

“After talking to the insurance company my initial estimates were definitely low. The new estimate is in excess of $1 million,” Studen said.

“We’re talking about completely gutting out the building, tearing off the back side. Much less of the inside is salvageable than I thought because of the smoke damage. It’s almost like rebuilding the building from scratch, but adding another couple hundred thousand dollars to clean up and remove everything,” Studen said.

“We’re starting to do some limited amount of cleanup — trying to get rid of the debris and salvage some of the equipment that’s salvageable. “

Because of the amount of debris created by the fire, most of the material will need to be trucked to the landfill in Okanogan. The local transfer station can’t handle the volume, Studen said.

With a local metal drive coming up this weekend, Studen said he has been picking out metal that can be salvaged to recycle it, and reduce the weight and amount of material he has to take to the landfill.

About 20 to 25 people lost their jobs when fire closed the pub, a popular Methow Valley venue for meetings, presentations, parties and dining. “Most of them have found other jobs, mostly restaurant work,” Studen said.

He said he is trying to honor prior commitments to cater events, such as a Cinco de Mayo buffet dinner at The Barn in Winthrop on May 5, and lunch at the finish line of the Sunflower Relay race on May 7.

Because the pub’s kitchen was destroyed in the fire, Studen is renting kitchen space at The Barn to prepare the food.

“I’m trying to use my existing employees [for catering] as much as possible just to give them some extra work,” he said.

The fire is believed to have started in or near the pub office at the back of the building, and spread into the kitchen and toward the restaurant at the front of the building. The office and kitchen area were heavily damaged by fire, and the dining area sustained severe smoke damage.

To replace records lost in the fire, Studen said he has hired an accountant to recreate financial records from bank statements.

The fire erupted about 2:30 a.m. on Feb. 29 and the back of the building was engulfed in flames when firefighters arrived. Residents living near the pub and firefighters reported hearing explosions soon after the fire began, likely caused by fuses in the electrical system, tires on a nearby vehicle that was also destroyed, and a propone tank in the building.

Among indications of arson, Budrow said, was a pile of burned restaurant rags soaked in some type of accelerant that were found in the restaurant, in an area that was otherwise not burned. Budrow said there is other evidence of probable arson, but has declined to elaborate.

A $10,000 reward is being offered for information leading to arrest and/or conviction in connection with the fire. The reward is offered by the Arson Alarm Foundation and more information is available by calling the Twisp Police Department at 997-6112.

Studen rebuilt the pub at its location on Highway 20 after fire destroyed his first restaurant and pub on Second Avenue in 2001. The Twisp River Pub was closed for kitchen renovations in November and December, and had been listed for sale for about three years.