Some praise handling of pellet-gun incident

Four parents attended the school board meeting on Wednesday (March 23) to urge the district to revise its policies for weapons incidents and asked them to officially inform all families about the pellet-gun incident, which occurred two weeks ago.

Parent Aimee Budrow said she was concerned that no one had called 911 and that Methow Valley Elementary School Principal Bob Winters had handled the matter on his own. After getting a report from a student that a classmate had a gun in a backpack — but not knowing if it was real or a toy — Winters went to the class and retrieved the backpack from a closet and escorted the student to his office.

Everyone put their children on school buses the next day, even though some parents and school staff still do not know what happened, said Budrow. “As a parent, it makes me nervous. I want procedures and protocol in place,” she said.

Paul Budrow, Aimee’s husband, attended the meeting as a parent but also reminded the board and superintendent that, as Twisp’s police chief, he is often on campus to teach or have lunch with kids. He took issue with the suggestion that calling in police officers could inflame a situation.

Administrators can still handle an incident as they deem appropriate, but they should call law enforcement first so officers are on hand in case a situation becomes violent. “At least we’re here to protect you if the student took the gun out of that backpack,” said Paul Budrow.

Mike Donlin, program supervisor of the school safety center with the Office of Superintendent of Public Instruction (OSPI), was aware of the pellet-gun incident at Methow Valley Elementary. “From what I heard, the school did the right thing, handled it professionally, and didn’t get everyone excited,” he said.

All school districts are required to have a comprehensive safety plan and a detailed map that shows not only buildings but also infrastructure like shut-off valves, said Donlin. Schools also conduct monthly safety drills for various emergencies.

But districts don’t have to submit their safety plans to OSPI or law enforcement for approval, in part because the Legislature has not allocated money for an in-depth review, he said.

Paul Budrow said he had been working with the previous superintendent and school staff several years ago to rewrite the district’s emergency policies. “We need to get back to having this policy rewritten. The one we have right now is a joke,” he said. He acknowledged that administrators had followed the existing policy.

“But returning the firearm [to the parent] was a pure violation. Bringing a firearm onto a school campus is a crime,” he said. 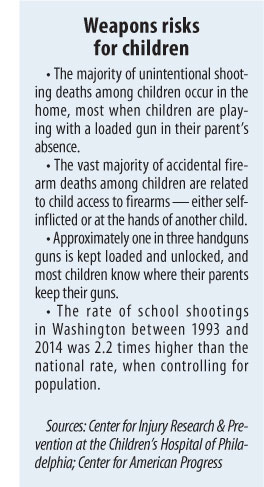 The district has been working on an update of its emergency procedures and will recruit staff, students and community members to join a school-safety task force after spring break, said Superintendent Tom Venable. The task force will work on the update through the spring and summer, and possibly into next year, and then review the plan annually, said Venable. Current policies will remain in place until the update is completed.

Establishing a process where staff, law enforcement and community members are all involved and aware of their roles is even more important than the plan itself, said Donlin.

The emergency handbook, which is posted in every classroom, provides brief, easy-to-follow steps so that even if there is a substitute teacher, the procedure can be followed quickly, said Venable.

Current procedures for dangerous and concealed weapons distinguish between low- and high-risk situations. Winters had determined the recent incident was a low-risk situation because the gun was in a backpack and the student didn’t have access to it when Winters went to the classroom, said Venable.

While some said Winters’ handling of the situation had put others at risk, others appreciated his approach and said their child had felt safe, said Venable.

Venable agreed that they should have called law enforcement once the situation was contained. Venable ended up calling hours later because he and Winters had not explicitly talked about notifying law enforcement and he did not know if Winters had reported it.

They saw no need to directly notify families of junior high and high school students and are confident most families are aware of the incident, Venable said last week.

Deciding how to handle these matters involves balancing the need to inform families with sensitivity to the fact that they involve a student in the school, said Venable.

Because of confidentiality requirements, Venable couldn’t say whether the student’s family had appealed the expulsion, although Winters said the family is eager for the student to return to school.

If a family appeals an expulsion, the appeal is heard by a neutral party. Standard follow-up includes opportunities, as appropriate, for consultation with mental health professionals, a risk assessment, and a process to ensure there is no access to weapons in the home, said Venable. A resolution often includes a plan so the child can make things right with classmates and others at the school.

“I get the fear and the level of emotion — as a parent myself, it scares us. But we have to balance that with the fact that children make mistakes,” said Venable.