Many people would imagine that the most challenging aspect of skiing with a blindfold on is that you can’t see trees or hills. But the most common effect turns out to be vertigo and a disorienting lack of balance.

For half-a-dozen local skiers, skiing with the blindfolds was just one aspect of learning to guide a group of blind and visually impaired skiers with the group Ski for Light. The most important lesson is communication, according to the trainers. 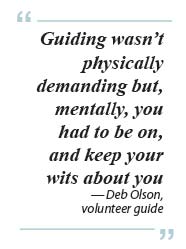 The blindfold exercise is 90 percent about trust, said Joseph Raineri, a blind skier from Bellevue who helped train the guides. Being blindfolded helps the skier and guide learn to trust one another and learn to communicate effectively, he said.

“I got vertigo twice in the first 10 minutes,” said local guide Kurt Snover. That reaction is very common, said Raineri. “When you try a blindfold, the whole world changes,” he said.

“I got nauseous,” said local guide Deb Olson. “When we’re sighted, our eyes are telling our body what to expect. It made me realize that, being visually impaired, you don’t have the same balance.”

Learning the right amount of communication was key — and different with every skier. Once they got going, newly trained guide Karen Mulcahy was surprised to find that she was providing too much information. “The skiers say, ‘Don’t worry — we just ski,’” she said.

This is the second winter Ski for Light has brought a group of blind and mobility-impaired skiers to the Methow Valley. But it was the first opportunity for local skiers to learn to be volunteer guides — and then to spend several days skiing with a partner.

A dozen skiers from the Puget Sound chapter of Ski for Light — 10 blind and two wheelchair users, plus another nine guides — spent three days in the Methow Valley last week. The event was organized by two local skiers, Nancy McKinney Milsteadt and her husband, Richard Milsteadt. Nancy has been a Ski for Light guide for most of her life, starting when she was just 18.

“Nancy and I have been dreaming a long time about bringing this to the valley,” said Richard, who helped train the new guides last week on the Sun Mountain trail system.

After a day of training, the six new local guides spent three days paired with a Ski for Light skier. Some of the novice guides were uneasy, but others found themselves almost too relaxed. “It was the opposite extreme from being nervous. I had to keep in mind that I was skiing with a blind person — I needed to remember to pay constant attention,” said Snover.

But Snover’s instincts were fine. “I trusted Kurt immediately, even in the first few hills,” said Raineri, who spent two days skiing with him.

While everyone in this group had skied before, when they start out, some Ski for Light skiers have never experienced snow, said trainer Roger Young. They also have to examine a ski to learn how long it is, how it flexes, and how the fish scales on the bottom grip the snow, he said.

The guides learned to tell their partners how to adjust body posture to adapt to hills and curves in the trail. Guides and skiers work out a system of communication, often using numbers to indicate the steepness of a hill or a clock dial to describe a turn.

For some people, vocabulary that sighted people take for granted — like “herringbone” or “snowplow” — is meaningless. Some blind skiers prefer to think in terms of scissors or a pizza wedge, said Young. Even experienced guides always learn from a new skier, he said.

One of the first things the new guides learned was to help people get up when they fall. “Don’t worry if your skier goes down,” said Raineri. “Everyone falls. It’s not your fault.”

Most in the Ski for Light group are recreational skiers, but many are accomplished athletes, running and riding tandem bicycles in other seasons. In addition to competitive skiing in the Paralympics in the 1980s and 1990s, Raineri has completed two Ironman triathlons, done the Seattle-to-Portland bike ride nine times, and run 19 marathons.

Raineri, the oldest of six children, said he and his three brothers all lost their sight — most as adults — because of a hereditary condition. The genetic condition is linked to the male chromosome and his two sisters are not affected.

In addition to skiing with a blind skier, valley resident Rick Rottman guided a skier in a sit-ski — a chair mounted on a pair of skate skis — as the skier propelled himself by double-poling. While most of the time they could ski next to one another, when they were going downhill, Rottman learned to hold the sled from behind to control its speed.

Most skiers like to ski side-by-side with a guide. The group praised Methow Trails for creating a second set of classic tracks in different parts of the trail system. In many ski areas, they get only a mile or two of double tracks, they said.

But some skiers — particularly those with some vision — prefer to have the guide in front. “Bob liked to ski hills, which kind of made me nervous,” said Olson, who would turn around to give him information about the trail.

“There was a fear factor, being responsible for him not hitting a tree — but he did fine,” she said. “After three days, I was mentally exhausted.”

Mulcahy agreed. “Guiding wasn’t physically demanding but, mentally, you had to be on, and keep your wits about you,” she said.

For some local guides, the experience was also physically exerting. Raineri’s brother Walt, who uses a earphones and a wireless transmitter to communicate with his guide, skied from Winthrop to Mazama — and back — in a day, a total of 40 miles.

Several of the blind skiers said skiing had changed their life by enabling them to be active. “It was very emotional,” said Mulcahy. “I’ll do it for them again and again.”

Olson said a sighted friend of hers who has never skied is considering giving it a try. If a visually impaired skier can do it, her friend figured she could, too.