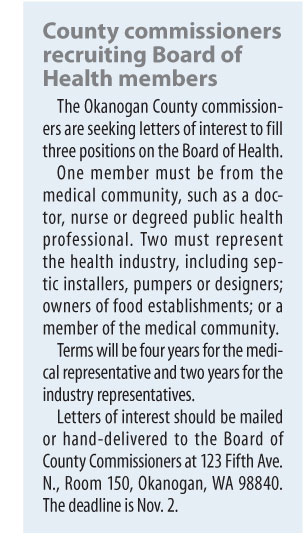 After initially considering a smaller Board of Health, the Okanogan County commissioners have elected to enlarge the board to seven members. The commissioners adopted a new charter increasing the membership from six to seven on Oct. 12.

The size of the board coincides with the recommendation to the commissioners from an advisory committee this summer, although the commissioners structured the board with different representation. The board will have the three county commissioners, a mayor or city councilmember, a member of the medical or environmental health community, and two members from a county industry related to public health.

The medical community representative would be a health care provider such as a doctor or nurse. The industry reps would be designers or installers of septic systems, owners of food establishments, or health care providers, according to County Commissioner Ray Campbell.

The commissioners were seeking a more diverse membership by including those who are regulated by Public Health, such as septic installers and restaurant owners, said Campbell. “They’re directly affected by Public Health decisions, so we thought it would be a broader representation,” he said.

The advisory committee had proposed a board with the three commissioners; a representative of the medical or environmental health community; and three city representatives, one from each commissioner district.

“It’s encouraging. I believe Public Health has support from the commissioners and the public,” said Lauri Jones, the county’s community health director. Last week’s Board of Health meeting was very positive and showed the commissioners’ willingness to listen, she said.

The draft charter considered by the commissioners last month proposed a five-member board — the three commissioners, a mayor or councilmember, and a representative from the medical or environmental health community. At a public hearing on the proposal earlier this month, a dozen community members urged the commissioners to expand the board, said Andi Ervin, a member of the advisory committee.

In his comments to the commissioners, Peter  Morgan  of Twisp, a retired health executive, urged the commissioners to make sure that the Board of Health and Public Health staff are a well-functioning and effective organization. “The public depends on public health to keep us all safe,” he said.

Concerns about the health district’s finances and changes in board membership created some perceptions of tensions between the bodies during the past year.

The Public Health district has a contingency fund to help cover expenses and bridge gaps in cash flow or delays in receiving permit fees. That fund was almost completely depleted at the end of last year, when the district used $100,000 to cover expenses, according to Administrative Coordinator Ella Robbins.

To replenish the fund, the commissioners required Public Health staff to take monthly furlough days. Those measures had restored half of the fund by August, when the commissioners rescinded the furlough requirement because all employees were needed to deal with health issues created by the wildfires. The furloughs have not been reinstated, said Jones.

The health district is run by a team consisting of Jones, Environmental Health Director Dave Hilton, and Robbins, who is retiring at the beginning of November. Present plans call for Jones and Hilton to manage the district on their own, said Jones. She said the Board of Health may want to hire a replacement for Robbins next year.

The commissioners approved a new lease this week for the office space the health district rents from the county. The lease is for a smaller area, which will save some money, said Jones.

There have been exploratory discussions about surplusing the office building that houses Public Health and the Public Works Department, but there are currently no plans to do so, said Jones. Because the building also contains the county’s certified water-testing lab, news of those discussions prompted concerns from cities and other water users, said Jones.

Campbell said that rumors that they might eliminate the lab are “completely false.” “We have no intention of reducing service at all,” he said.

The commissioners are soliciting interested parties for the Board of Health. The new charter builds in more frequent turnover. The medical representative will serve for four years and the industry reps will start with two-year terms, which will then become four-year terms.

The commissioners and city representative will serve as long as they remain in office. Oroville City Council member Neysa Roley will continue on the board.