Spike camp near Twisp is home base for 150 firefighters

After the Okanogan Complex Fire became the top priority wildfire in the United States last week, a Type 1 national incident management team took over operations, bringing with it top-level fire managers and firefighters, soldiers from Fort Lewis, and troops from the Washington National Guard.

Assigned to the Twisp River Fire — Branch III of the complex — are 10 fire managers from the Rocky Mountain Type 1 Incident Management Team and 150 firefighters, with headquarters set up at a spike camp at Riverbend RV Park north of Twisp.

The Okanogan Complex is composed of five separate fires spread out over a wide geographic area that includes — besides the Methow Valley — the towns of Tonasket, Riverside, Omak, Conconully and Okanogan, as well as a wide swath north of Highway 20 over Loup Loup Pass. Base camp for all these fire fronts is in Omak, so to reduce travel time and get fire resources closer to the Twisp River Fire, a spike camp — similar to a military forward operating base — was warranted, said Operations Branch Director Mike Tombolato.

Tombolato, from Boulder, Colorado, and Safety Officer Keith Long from Longmont, Colorado, are in the Methow Valley for the second summer in a row, both having worked on the Carlton Complex Fire last year.

“Coming back here, we didn’t have to learn the roads and subdivisions like we did last summer,” Tombolato said. “We know the local fire chiefs and we have trust in each other. We can hit the ground running.”

The Type 1 team came in on Friday (Aug. 21) to “help out the local resources, who have exceeded all their capabilities,” Long said. “The local responders did a true professional job protecting Twisp with back burns,” Tombolato said. 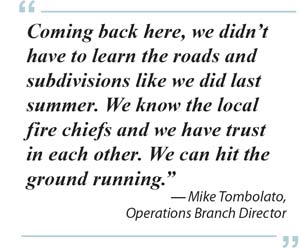 The Twisp River Fire, which started around 12:30 p.m. on Wednesday afternoon (Aug. 19) about 6 miles west of town, moved rapidly toward Twisp, threatening homes and forcing authorities to issue an evacuation notice to residents. While back burns were successful in protecting the town, strong winds pushed the fire north toward Winthrop, prompting further evacuations.

By Tuesday (Aug. 25), the Twisp River Fire had grown to over 10,000 acres. “Now we’re trying to steer the fire,” with the goal of “pinching it off” at Thompson Ridge Road, Long said.

Strike teams have been working 14- to 16-hour days putting in fire lines and conducting back burns in order to contain the fire, which is moving in a northwesterly direction and threatens the Pine Forest development. Day shift begins with a morning briefing at 6:30 a.m.; crews roll out of camp around 7:30 a.m., and arrive back in camp between 9 and 11:30 p.m.

“That doesn’t leave a lot of time for meals, showers and laundry,” Long said.

Spike camps don’t get catering services so hot meals are driven over twice daily from the Chelan Complex basecamp.

The night shift, consisting of five engines staffed by four firefighters each, plus a supervisor, patrol areas “identified during the day to keep an eye on,” to ensure that the fire line holds overnight, Tombolato said. “They move around a lot at night,” he added.

Night shift starts with a 6 p.m. briefing; crews generally return to camp the next day around 8 a.m. After breakfast, the 21 men head over to the Liberty Bell Junior/Senior High School gymnasium “so they can get some sleep,” said Long.

The Rocky Mountain Type 1 Incident Management Team came off the Soda Fire near Boise, Idaho, and drove directly to the Methow Valley “with no days off,” Tombolato said. Because of this summer’s extraordinary number of large fires, the National Interagency Fire Center has declared national preparedness to be at Level 5 — meaning nearly all fire resources (people) are already committed to fires.

“Actually, they’re calling it a 5.5,” said Tombolato, because the fire personnel situation is so dire. “We’ve literally broken new ground. There are more incidents than we’ve been able to manage.”

While their work schedule is normally 14 days on with two days off, some teams have extended it to 21 days, Tombolato said. To extend the days on, teams have to get permission from their home unit supervisors. “We will have to start discussing it amongst our team in the next few days,” Tombolato said.

Riverbend RV Park hosted around 25 operations and safety managers, including Tombolato and Long, last summer. And owners Ed and Cheryl Ethrington made them feel so welcome that when they found out they were coming back to the Methow, “I knew where we wanted to go,” said Long.

Cheryl Ethrington said she is pleased to have the firefighters there, adding “I feel super safe here because they wouldn’t put a fire camp in a dangerous location … Normally with the park empty I’d be bored out of my mind, but I’m staying busy with the firefighters here.” Although business is slow at the moment, Ethrington is confident that “as soon as the pass opens, business will pick up. There is still plenty of room in the park for RVs and tent campers,” she said.