Flames, smoke, power outages and uncertainty recall the summer of 2014 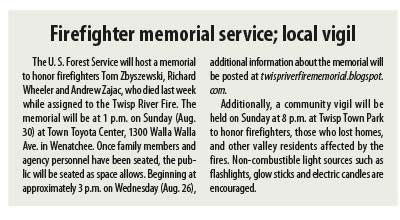 In a community primed for anxiety, the thick blanket of smoke that settled over the valley early this week may have been a blessing of sorts. It hid smoke plumes from two days of burnouts conducted to contain the Twisp River Fire.

“It was so smoky already that no one saw the smoke columns. It really kept the anxiety level down,” said Mike Tombolato, operations manager for the Twisp River Fire.

Strike teams and smokejumpers conducted burn outs Sunday and Monday around the active northwest side of the fire to solidify fire lines, said Tombolato. The result is a good control line around that worrisome flank of the fire, he said.

Crews conducted burn outs along fire lines from the top of Elbow Coulee, west to Thompson Ridge and Cow Creek, south to Little Bridge Creek and on down to Twisp River Road, Tombolato said.

“That’s where we’ve put the line in the sand and are holding it,” he said. “If people can have a little more patience with us, people can be pretty darn comfortable that they can get back to their normal lives pretty soon,” he said.

Residents of the Methow Valley may wonder what that word — “normal” — really means. Mourning the deaths of three firefighters last week, and reeling from multiple evacuations, power outages and destruction of homes and property, the community is once again struggling with the aftermath — and ongoing reality — of devastating wildfire.

The Twisp River Fire exploded to life early Wednesday afternoon (Aug. 19) about six miles up Twisp River Road, in the vicinity of Woods Canyon Road. High temperatures, strong winds and tinder-dry vegetation fed the fire, which quickly grew from two acres when it was first reported to a firestorm that threatened both Twisp and Winthrop for several days.

Within the first three hours of the fire, three U.S. Forest Service firefighters were trapped when the wind changed directions and the engine in which they were riding went off the side of Woods Canyon Road and was engulfed by the fire. The incident that took the lives of Tom Zbyszewski, Andrew Zajac and Richard Wheeler is under investigation.

By the evening of the first day, the fire was being managed as part of the Okanogan Complex Fire, which includes several other fires in the county and was the top priority incident in the nation as of the beginning of this week.

Strong winds that continued through Thursday and Friday (Aug. 20 and 21), helped the fire grow and expand toward Twisp, upper Twisp River Road, as well as toward Thompson Ridge and Sun Mountain.

Air support, including helicopters and tankers, bombarded the fire when conditions permitted. On Friday alone, 19 loads of retardant were dropped on the fire.

Four homes were reported burned on Woods Canyon and Myer Creek roads off Twisp River Road, although an official assessment of damage by Okanogan County officials is not yet available.

County Assessor Scott Furman said it would “take several weeks to identify the damage [throughout the county] because it’s all over the place.”

The Twisp River Fire “is the greatest news of success” among the firefighting efforts in the Okanogan Complex, Peter Frenzen, an information officer with the incident management team, said Tuesday (Aug. 25).

The inversion that settled in on Sunday was a help to firefighters, essentially placing a lid on the fire and reducing fire activity.

“The unfortunate part is, aviation can’t fly,” Tombolato said. That meant helicopters weren’t available to provide protection with bucket drops if a back burn got away, he said.

“That’s why we had to go really slow with the burn out operation. It took two days to do,” he said.

The successful establishment of fire lines around the Twisp River Fire meant that some hotshot crews would be released to fight fire in other areas where they are needed, and replaced with Type 2 hand crews, Tombolato said. Hotshot crews are trained to work at the fire edge in “steep and nasty terrain,” he said.

The new hand crews “will mop up, thicken and deepen the control line for us,” Tombolato said. He said 240 people were working on the Twisp River Fire this week. Equipment assigned to the fire included eight bulldozers and “a lot of engines and water tenders,” he said.

The fire knocked power out to about 200 residents on Twisp River Road beyond Elbow Coulee shortly after it ignited.  The area was expected to have power restored by Thursday (Aug. 27), although it could be longer for a few residences where fire caused the greatest damage, according to the Okanogan County Electric Cooperative (OCEC).

Approximately 3 miles of electric line was destroyed. OCEC worked with Washington Department of Fish and Wildlife and the Forest Service on a redesign that balanced environmental impact, costs, and time to restore service.

A line crew from Inland Power and Light out of Spokane was assisting OCEC crews in replacing burnt poles and restoring power. Several local contractors were also assisting.

The entire Methow Valley lost power at 1:30 p.m. Friday when a power pole caught fire near Okanogan, causing an outage on the line that carries power over Loup Loup Pass. The pole was replaced by the PUD and power was restored at 12:50 a.m. Saturday.

The National Guard arrived in the valley over the weekend to assist local law enforcement. They had set up a checkpoint Sunday on Twisp River Road near Poorman Creek, allowing only residents to continue on up the road while the area was still under evacuation orders. They warned residents that there would not be resources available to protect homes if fire returned.

Guard members said they were also asked to provide a presence and to patrol evacuated areas, such as Pine Forest, to prevent possible looting.

Thick smoke in Okanogan County reduced fire activity in the Okanogan Complex, but also prevented helicopters and air tankers from assisting with suppression efforts early in the week. On Tuesday afternoon it appeared the inversion was lifting somewhat in some areas, allowing aircraft to fly, but also encouraging fire activity, Frenzen said.

Some aircraft sent to assist in the Okanogan Complex, including Black Hawk helicopters, were being sent during the inversion to the Chelan Complex Fire to assist with bucket drops.

As of Monday, the total area of the Okanogan Complex had grown to 258,339 acres, with 15 percent containment and 1,345 personnel assigned to the fire, according to information from the Rocky Mountain Incident Management Team that is managing the complex.

The Okanogan Complex is expected to soon exceed the size of the Carlton Complex Fire, the largest fire in Washington state history, which burned 268,764 acres.

As of Tuesday morning the Tunk Block Fire burning between Tonasket and Omak had reached 133,410 acres.

The Nine Mile Fire near Oroville was 4,720 acres and 95% contained, and was in patrol and monitor status.

Fire managers asked motorists traveling on Highway 20 and Highway 97 near fires to slow down and drive carefully, due to heavy fire vehicle traffic in those areas.