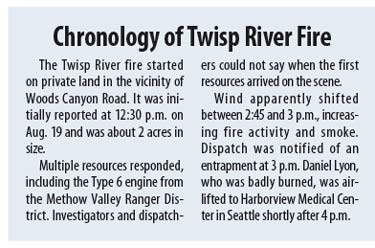 The engine in which three firefighters died in the Twisp River Fire was found on a hillside about 40 feet below Woods Canyon Road, according to investigators for the U.S. Forest Service. When reached by emergency responders on Wednesday (Aug. 19), the engine was upright and had been burned over, with the three deceased firefighters inside.

That information was included in a summary of confirmed events and an approximate chronology released by the Forest Service on Sunday (Aug. 23) from the initial investigation into the fatalities and the cause of the fire.

Forest Service investigators were on the scene almost immediately, according to Christopher Boehm, assistant director for law enforcement and investigations with the Forest Service. On Saturday (Aug. 22), investigators began interviewing other firefighters who were part of the initial attack on the fire. Forest Service law-enforcement personnel have also been scouring Woods Canyon Road and the surrounding area, about 6 miles west of Twisp.

There are still many unknowns surrounding the deaths of Tom Zbyszewski, Andrew Zajac and Richard Wheeler. A fourth firefighter, Daniel Lyon, suffered third-degree burns on more than 60 percent of his body. Two firefighters with the Washington Department of Natural Resources (DNR) and a contractor working for DNR were also injured, but less seriously.

Although the investigation is still in the early stages, Mike Williams, forest supervisor for the Okanogan-Wenatchee National Forest, and John Phipps, who is leading the coordinated response protocol for the Forest Service investigation, released the summary at an Aug. 23 news conference and answered questions from the media. As of press time, they had no additional information, according to Jennifer Jones, public affairs specialist for the investigation team.

The situation was clearly chaotic, and it appears the firefighters had gotten into the engine to escape the fire, said Phipps. There is no evidence that they got out of the vehicle and then got back in again, although the left rear door was open, he said.

Phipps said the vehicle appeared to have gone over the embankment but had not rolled. The embankment was not very steep and investigators have no explanation for the accident at this point. The vehicle was found off to the side of the road on the outside of a curve. It is not known who was driving.

Investigators also do not know if the fatal injuries were caused by the vehicle crash or the fire, said Phipps.

The area where the accident took place was fully engulfed by the fire and investigators are trying to reconstruct what may have been there, said Phipps. The fire removed a lot of vegetation.

Phipps said they believe there were some radio communications as conditions changed — the wind reportedly shifted 180 degrees — but he did not have any details or confirmation.

Investigators believe the three other injured firefighters, including a bulldozer operator and dozer boss, were found higher up on the hill, said Phipps. There were complex interactions between the firefighters on the upper and lower areas during the initial attack, he said.

At least two fire shelters had been deployed, but investigators do not know how far they were from the vehicle.

From what investigators know now, there were no witnesses to the circumstances that caused the truck to leave the road, said Phipps. Investigators hope that when Lyon is able to talk he can provide more information about the circumstances surrounding the accident and fatalities. He is in the intensive care unit at Harborview Medical Center in Seattle.

The Type 6 engine involved in the fatal accident is one of the smaller fire engines used by the Forest Service. It is essentially an extended-cab pickup with front and back seats, and an engine assembly, including a water tank and hose, on the back of a flatbed, according to Cathy Dowd, public affairs officer with the Okanogan-Wenatchee National Forest. It typically carries a five-person crew.

The cause of the fire is also under investigation. Investigators have not reached conclusions about whether it was caused by lightning or was human caused, said Boehm.

Investigations are conducted any time the Forest Service loses an employee, whether in a vehicle accident, from a falling tree or in a fire, said Boehm. Boehm and a colleague recently arrived in the Methow Valley to assist with the investigation.

The team conducting the learning review — part of the Forest Service investigation process — spent all day at the site on Monday and may return if they need more information, said Jones. Reports containing what they learn from such incidents are shared with others in the agency and in firefighting roles.

Woods Canyon Road has several sharp turns as it climbs a steep hill on the north side of Twisp River Road. There were six residences on the road, plus other structures, and initial reports indicate that at least three homes near the top of the road were destroyed in the fire.

Forest Service investigators have been examining the area near Woods Canyon Road and around a small house just west of there owned by the Douglas County Public Utility District. A spokesperson for the utility said the house is vacant.

Woods Canyon Road is still closed because of the ongoing investigation.

In addition to the investigation by the Forest Service, the federal Occupational Safety & Health Administration, the Office of Inspector General, DNR, and the Okanogan County Sheriff’s Office will do their own investigations. All the agencies have different requirements and interests, said Phipps.

The Forest Service adopted the protocol in June 2014 in part so that the agency can learn from complex incidents with many moving parts, said Phipps.

“Safety is one of the U.S. Forest Service’s five focus areas and the agency’s goal is to become a zero-fatality organization,” said Jones by email. A key to reaching the goal is to learn as much as possible from accidents, and that requires survivors and witnesses to be willing to share what they know about the circumstances, she said.

“Unfortunately, due to a variety of factors, over the years many U.S. Forest Service employees lost trust in the agency’s accident investigation process, came to fear it, and consequently were unwilling to share what they experienced and knew,” said Jones.

“Personnel assigned to collect information or data can become so focused on their task that they can unintentionally do damage to the personnel involved in the incident,” she said. To this end, the new protocol focuses on employee well-being and on learning from these events.

The protocol is a change from the Forest Service’s previous approach to accidents. Results of investigations into past fires focused on the fact that fundamental rules of firefighting had not been followed, said Phipps. That was one of the findings in the investigation into the Thirtymile Fire of 2001.

The Forest Service will use the information to learn as an organization, rather than oversimplifying the situation by attributing it to failure to follow a particular rule. It’s a shift from holding individuals accountable for not following rules, said Phipps.

The new protocol also incorporates cognitive-science research about how humans perform in high-tension, unpredictable environments. Experienced firefighters perform well in the face of complexity and all personnel involved in the event did the best they could and took actions that made sense at the time, said Phipps.

The primary reason for the investigation is to do a safety review so people can learn from it and plan for the future, said Boehm. The information is also used in connection with employee benefits and agency liability.

“Surprisingly, with few exceptions, we can come down to a cause,” said Boehm. They examine fire behavior, topography and available fuels, and there is typically enough evidence left at a scene to determine a cause, he said.

“The fire is a physical thing. As it moves through an area, it leaves signs that we can read. We can follow those breadcrumbs back to the origin,” said Boehm.

This is the fourth fatality investigation for Boehm this year. He has already conducted investigations in Mississippi and California.

Investigators have asked that anyone who witnessed the start of the fire or has additional information call (509) 341-1657.