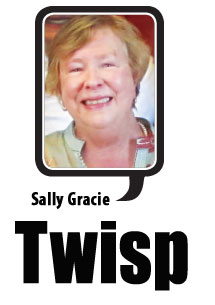 I returned today (Aug. 17) from Nebraska, where I spent 10 days with my new grandson William Ayres Gracie, who was born on April 30, 2015, at Bryan East Medical Center in Lincoln. His mom and dad, Kate and David, are delighted to have his company. They waited three years for him to arrive. I am, of course, the doting Gram. I waited a long time to have a grandbaby to play with. I didn’t spend time with Amaya until she was 4 (she’s 20 now!), and Will is my second grandchild.

Though Will is a good-natured fellow, tending to his needs by myself for seven hours one day reminded me why old ladies don’t have babies. It’s a good thing that Kate and Dave’s living room has been transformed into Will’s own Baby Cave. Equipped with every conceivable piece of baby entertainment and training equipment available, I found plenty to keep him happy when he tired of me.

The Fisher Price Power Plus Swing has a built-in music box that plays classic lullabies. It’s a nice piece of equipment, but not so different from the 1970s version. The Sensory Safari Activity Gym — which David calls the “Pleasure Dome” — is a colorful mat with toys that dangle from two fabric arches. Will goes down on his tummy in this “gym” to build up his muscles in preparation for rolling over on his own. Add a little music box with more classical tunes, and he will practice his moves.

Mothers of my generation used a playpen, and frankly, this Activity Gym is pretty much the same as a playpen without sides. What’s with the no playpen thing anyway? Playpens kept my kids contained and safe. I can just picture Will in a few months crawling across the room to hide like the babies in Raising Arizona.

I have nothing bad to say about the Mama Roo infant seat. Actually, I want one for myself. With Bluetooth that connects to iTunes’ baby songs through an old smart phone, the egg-shaped seat rocks in your choice of six different motions. I had the best luck getting Will to nod off at naptime when I selected Ocean Waves. Car Ride is okay, but I got carsick watching the Tire Swing, and I wasn’t swinging. There is an argument to be made for toys that make parents’ lives easier.

Kate is student teaching this semester, and my visit coincided with her first week in a third-grade classroom. As art chair at Nebraska Wesleyan, David has meetings all this week and classes next week. He also has to find time to paint. They miss Will all day long, and it’s cool that at the end of the day, they want to hold and touch him and have as much body contact as possible. I’m the grandma, though. I really like the Orbit, and I don’t feel a bit guilty about putting Will in it when he was getting fussy. I’m also certain some will think I’ve ruined Will for life by introducing him to “PBS Kids” and the Muppets on the giant flatscreen. My grandbaby has a Baby Cave, and I took advantage of it.

Congratulations to Hillary (Ketcham) and Roscoe Roseland on the birth of their daughter Millicent Bean Roseland, on Aug. 1, 2015. May she, too, enjoy the pleasures of a Mama Roo.