Some in health care community are skeptical

Four-year-old Anabelle Picklesimer is an active, talkative child who shares her toys with her little brother Caleb and eagerly demonstrates her bike-riding ability when visitors come to the house.

But Anabelle had her parents concerned recently after they discovered a tick behind her ear, which they worried might carry Lyme disease. 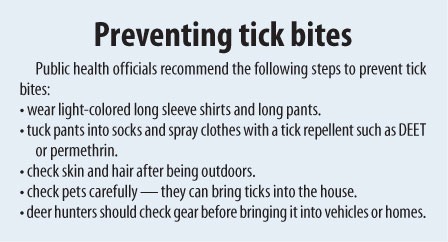 The tick might have come from the Picklesimer’s back yard in Winthrop, or possibly from a relative’s house on Twisp-Winthrop Eastside Road, which the family had visited for several hours the evening before the tick was discovered, according to Anabelle’s mother, Sarah Picklesimer.

Picklesimer found the attached tick while she was giving Anabelle a bath on the morning of May 26 or 27, at least 12 hours after Anabelle had last been outdoors, she figures.

“We might be a little more worried about ticks than most people,” said Picklesimer, who has three family members who contracted Lyme at one time or another, so after she successfully removed the tick, she sealed it in a plastic bag and put it in the freezer. Then she telephoned her sister-in-law, and asked her what she would do in this situation.

“I don’t want to get everyone panicked, but I would want to save people going through what my sister-in-law has gone through,” — more than 10 years of illness due to chronic Lyme disease, Picklesimer said.

The sister-in-law suggested the Picklesimers consult a “Lyme specialist,” Dr. Bernard Raxlen of New York, who has provided medical treatment for her illness, according to Picklesimer. Raxlen recommended they send the tick to IGeneX lab in Palo Alto, California, where the tick could be tested for Lyme and other tick-borne diseases.

They sent the tick to IGeneX by mail the next day.

“We didn’t want Anabelle to get antibiotics if it wasn’t Lyme,” said Picklesimer, who was advised at both the Country Clinic in Winthrop and Family Health Centers in Twisp to wait and see if Anabelle developed any symptoms such as a characteristic bullseye rash at the site of the bite, fatigue, or fever. Both health care providers emphasized that there are no known Lyme-carrying ticks in our area, and didn’t recommend antibiotics at that time, Picklesimer said.

But she became worried when Anabelle, normally an early riser, started sleeping several hours later than usual for about a week after the tick bite, Picklesimer remembers. “She was also telling me her arms hurt, and she kept pointing to her elbow,” Picklesimer said. “But she is 4, and she could be uncomfortable or tired because she’s going through a growth spurt or something,” she acknowledged.

Three weeks after they found the tick, what looked like a bullseye rash showed up on Anabelle’s arm. Picklesimer brought Anabelle back to the Country Clinic and “the nurse there told me it was a mosquito bite,” Picklesimer recalls.

Picklesimer expected to hear back from IGeneX any day, so she and her husband decided “if the tick comes back positive, we’ll put her on antibiotics,” she said.

About one week after Picklesimer first saw the rash — about 30 days after the tick bite — the lab called with the results: the tick they had sent in tested positive for Lyme disease.

Picklesimer brought Anabelle back to nurse practitioner Kathy Kirner at Family Health Centers, and Kirner prescribed a 21-day course of Amoxycillin for the child. Anabelle recently finished the course of antibiotics and “is symptom free as far as we can tell,” Picklesimer said.

Lyme disease is a worldwide infectious disease caused by the bacteria Borrelia burgdorferi, which is carried by tiny ticks. On the West Coast, the principal vector is Ixodes pacificus, the western black-legged tick.

In Washington, I. pacificus is mainly found west of the Cascades, but a few have been found in the central counties of the east slopes of the Cascades, according to collection studies conducted by the state Department of Health.

In four years of tick surveillance, only 10 of 602 (1.7 percent) of I. pacificus tested in Washington were found to be positive for B. burgdorferi, according to Jacqueline Dawson, public health epidemiologist with the Chelan-Douglas Health District. The positive ticks were only detected in Clallam, Jefferson, Kitsap and Mason counties — all on the Olympic peninsula. All of the I. pacificus ticks collected in Okanogan, Chelan, Douglas, Kittitas and Grant counties were negative for B. burgdorferi, Dawson wrote in an email to Dr. Ann Diamond at the Country Clinic.

Between January 2005, and August 2014, 11 confirmed Lyme cases with in-state exposure were documented, according to Dawson.

“We’ve never had a confirmed case in Okanogan County,” Diamond told the Methow Valley News, though she did recently treat a patient in the Methow Valley who displayed symptoms, including the characteristic rash, consistent with Lyme disease. “It looked like Lyme,” Diamond said and, even though the patient did not recall having a tick bite, Dr. Diamond treated her for the disease “and is now fine.”

“If somebody comes in to the clinic who has been bitten by a tick, I will treat,” said Diamond, who said it’s not uncommon to give a one-day antibiotic treatment in that case. “If somebody presents with a rash, then we absolutely treat,” Diamond said, generally with a 21-day course of Amoxycillan.

While Diamond credits Picklesimer for taking action out of concern for her daughter, she warns against using non-FDA approved laboratories like IGeneX for tick testing. “It’s a multi-million-dollar a year industry,” Diamond said, referring to the millions of Lyme tests that are performed across the United States each year, some from unregulated labs.

The disease can be debilitating, and “people are desperate for answers,” Diamond said. “These testing facilities have a vested interest in positive results.” Diamond says she and many others in the medical community are concerned that false positive tests may convince patients to seek long-term treatment for Lyme disease when they are actually ill from some other disease.

Lyme disease should be diagnosed based on symptoms, physical findings (e.g., a rash), and the possibility of exposure to infected ticks, according to the U.S. Centers for Disease Control and Prevention (CDC).

Dr. Diamond said she has asked IGeneX to send back the Picklesimers’ tested tick or macerated solution so that she can send it in to an approved lab for confirmation. IGeneX has not responded to her request.

According to the state Department of Health, Washington has very few cases of tick-borne disease, yet each year a few cases of Lyme disease, tick-borne relapsing fever, and Rocky Mountain spotted fever are reported to state health officials. People can also have allergic reactions to tick bites.

Diamond said she has seen tick paralysis and Rocky Mountain spotted fever at her clinic — the latter probably acquired in another state.

If you find a tick on your body, the experts recommend removing it promptly, using tweezers or forceps. Grasp the tick mouthparts close to the skin and pull the tick straight out; do not twist. Save the tick for testing — the CDC recommends taping it to a piece of paper and putting it in a small container. Wash your hands with soap and water and apply antiseptic to the bite site. Note the date you found the tick, in case you develop symptoms.