The northern Pacific rattlesnake, Crotalis oreganus, has been turning up in the Methow Valley this summer in numbers sufficient to give some outdoor enthusiasts and their animal companions a new and unnerving definition of  “up close and personal.”

Wolves, moose, wolverines and the occasional bear all do their part to infuse the valley with a quality of remote ruggedness, but no creature quite represents the reality of “wild” like the rattler.

Coiled and nearly invisible along a hiking trail, hidden behind a boulder or rotting log, or seeking temporary refuge around man-made structures, this Washington native has the ability to instill alarm like no other when the familiar silence is shattered by its distinctive warning rattle.

Details of recent local encounters underscore the necessity for outdoor trekkers to be extra cautious this year and keep a close eye on animal companions while enjoying the variety of excursions around the valley.

Lance Rider, owner of The Outdoorsman sporting goods store in Winthrop, said he recently assisted a customer who entered his shop and inquired about topical treatment for a spider bite.

“I said I had product in stock for insect stings,” Rider said. “When I asked about the bite, this elderly gentleman showed me the spot near his ankle. I could see two distinctive puncture marks about a half-inch apart and the bite area was showing signs of redness and swelling.”

“You’ve been bitten by a snake,” Rider informed his customer, but added that he could not say whether the bite was from a rattlesnake or one of the other non-poisonous reptiles indigenous to the valley. 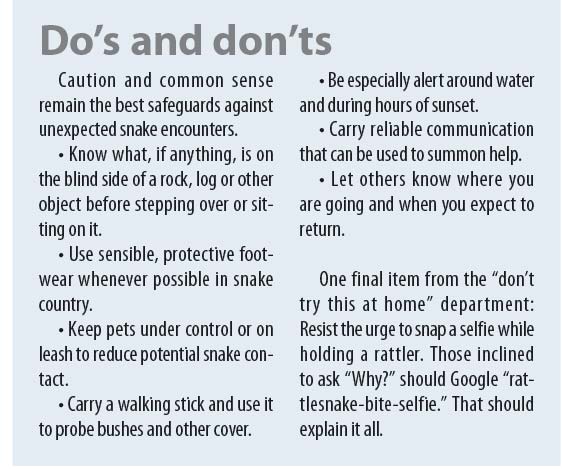 “I advised him that he needed to seek medical attention and directed him to the Country Clinic south of town,” Rider said. “He didn’t seem to be in any hurry about it and appeared to be more interested in shopping a bit, so I don’t know if he followed my advice or not.”

When contacted at the Country Clinic earlier this week, Dr. Ann Diamond reported that her facility has treated two individuals for rattlesnake bite so far this year. One of those bites was non-envenomated in nature while the other required treatment with antivenom vaccine.

Among the valley’s veterinary clinics, Dr.Terri DeWeert of the Valley Veterinary Clinic in Twisp has treated “five or six canines” for snakebite this year.

Dr. Betsy Devin-Smith, of Winthrop Veterinary Services, has treated four rattlesnake-related animal bites this season. One was for Janice and Pete Dickinson’s dog, Shilo, a 13-year-old golden retriever that was tagged by a rattler while on a walk with Pete a few weeks ago.

“She was staggering down the trail and just collapsed,” Janice said. “We weren’t sure at first what happened. Then we noticed that her back leg starting to swell. As the day progressed both legs and the abdomen turned purple.”

Devin-Smith, who has yet to lose a dog patient to snake bite, took Shilo to her clinic for two days of intravenous therapy. Shilo, now recovered, “doesn’t appear to be in any pain” Dickinson said, but the dog lost body tissue around the bite mark when the flesh became necrotic and sloughed off.

Cardiologist Jay Gorham of Mazama had his own heart-stopping encounter with a large rattler while walking his daughter’s 100-pound Swiss mountain dog, Nala, on a trail some three miles south of the Mazama Community Center. Gorham said the dog dodged to a tree just off the trail and was bitten on the muzzle by the snake coiled there.

“It happened so fast that the snake rattled as it struck,” Gorham said.

Gorham said he grabbed the dog’s collar just as she lunged at the snake a second time. The action exposed Gorham to the snake’s second strike that ended just below his outstretched arm. Following a mile-long dash back to his pickup, Gorham — while familiar with the local vets’ snakebite expertise — drove the dog to Wenatchee at his daughter’s request for treatment, and ultimate recovery, there.

Rattlesnakes have even caused a buzz among local Internet chat line circles. Shelly Anderson who, with best friend, Kim Peterson, relocated last April from Whatcom County to the family ranch south of Twisp, dispatched a large rattler she discovered in her barn earlier this week.

The large reptile, towing a 14-button rattle, “was an immediate threat to pets, stock and kids,” Anderson said of her decision to terminate the intruder. A subsequent photo that Anderson shared with friends showing the dead snake was “unintentionally posted” by an unknown party, Anderson said, and was not meant to publicize the event.

Chris and Brad Garner, owners of the Badger House Inn in Winthrop, were tending to an absent friend’s property when their border collie, Harriet, unexpectedly jumped into their truck. Closer inspection revealed “two fang marks about an inch apart on the nose,” Chris Garner said. Harriet was at the Methow Valley Veterinary Hospital within a half hour where Dr. Michael Marrone tended to her injury.

“Her face swelled up and she looked like a little cow,” Garner said. “She was very sick for three or four days and took a couple of weeks to recover.”

Harriet’s bite was one of two that Marrone’s office has treated this year. The clinic also hosts the annual rattlesnake aversion training class for dogs held during the third or fourth weekend of June.

Lori Loomis, owner of Lariat Coffee Roasters in Winthrop, and the original sponsor of the rattlesnake aversion clinic, offered some advice gleaned from the visiting snake experts.

“They told me that when temperatures rise above 85 degrees or fall below 55 degrees, rattlesnakes become more agitated as their comfort zone exceeds those extremes,” Loomis said.

Based on that assessment, this summer’s unusually hot and dry conditions play a significant role in snake behavior.

A number of theories have been advanced to account for the valley’s up-tick of snake activity. Among those are last summer’s wildfire activity that devastated thousands of acres of habitat causing rattlesnakes to alter migration routes or range farther afield; another is the Methow Valley Irrigation District’s new underground pipeline that replaced the previous open canal, and a ready water source for rattlers and other wildlife.

New home sites and expanding human presence around the valley also increase the likelihood of snake encounters while reduced hunting pressure and a repopulation of snake numbers may also be a factor.