On the anniversary of the Carlton Complex Fire’s outbreak, a community looks forward

The Carlton Complex Long Term Recovery Group (CCLTRG) has come a long way since representatives from social-service agencies, relief organizations, mental health providers, and concerned citizens began meeting in the earliest days after the fire — even before the electricity came back on in July 2014.

As it has learned more about people’s needs — and as needs change — CCLTRG has hired key staff and started work on eight of the 11 homes in their first phase of rebuilding. The group plans to build 40 homes for people with insufficient resources to recover on their own.

With an executive director, a reconstruction project manager, a volunteer coordinator, and a development and communications coordinator, plus a phalanx of volunteers — 678 since last fall, and 3,520 volunteer hours in June alone — CCLTRG is helping hundreds of survivors get back on their feet.

The organization also collaborates with two disaster case managers, who work directly with survivors to create customized recovery plans. The case managers are under the direction of Room One and the Okanogan County Community Action Council.

An unmet-needs roundtable, which generally meets every other week, picks up where other resources have been exhausted. Room One has earmarked 65 percent of their fire-recovery fund to unmet needs.

Individual needs are brought forth confidentially by the case managers. The roundtable consists of representatives from Room One, The Cove, Community Action, the Community Foundation of North Central Washington and other organizations.

CCLTRG committees focus on all aspects of recovery. While housing may be the most visible need, there are also groups working on public safety and communications, infrastructure and power distribution, business continuity and economic development, and agriculture and land restoration.

CCLTRG is dealing with a highly complex situation, where every individual and every case has a different dynamic, said Carlene Anders, executive director of CCLTRG. “Everyone was hurt in some way or another,” she said.

While everyone — even those not directly affected by the fire — suffered some trauma, experience from other disasters suggests that if a community can maintain solid support over the next three to five years, the whole area emerges healthier and more sustainable than before the crisis, said Jim Shelley, a Mennonite Disaster Services (MDS) volunteer with decades of experience, who is helping with rebuilding.

CCLTRG expects to be in place for at least three years, said Anders. 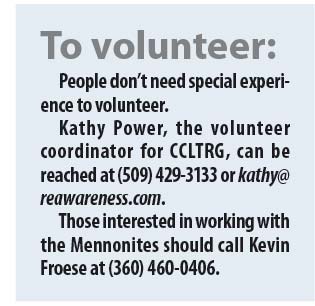 While CCLTRG has a solid infrastructure in place, the organization recognizes the vast scope of what it’s trying to accomplish. “It would have been devastating without the volunteers,” said Anders.

Volunteer groups with expertise in managing disasters and in various phases of rebuilding — from framing to roofing to managing crews — have devoted countless hours and actual cash to help fire survivors.

MDS is one of the key participants, with project managers here for seven weeks at a time to coordinate specific construction projects. They manage volunteers who donate anywhere from a day to a week of their time. Some are retired, some donate part of their vacation time, and others are students on summer break.

The first managers, Robert and Sally Unrau, just completed their volunteer shift this past weekend, handing over the reins to Jim and Karen Shelley. Both couples, from the Boise area, bring years of experience working in disasters, from hurricanes to floods to fires. They create a daily schedule to track the volunteers and the jobs.

Established in 1950, MDS has evolved and grown more efficient, said Jim Shelley. They developed standardized house plans that they can adapt to local building codes.

“We can take any volunteer willing to learn and bring that person up to speed in about two days,” said Robert Unrau, who retired from a career as an architect and now devotes much of his time to helping in disasters.

Two young women from the Amish community in Lancaster, Pennsylvania, traveled cross-country by train to cook for the Mennonite volunteer crews.

“We don’t come to convert, but to share, said Kevin Froese, vice chair of the Washington MDS region. “Our faith is very important to us. One of the reasons we do this is because of who we serve,” said Karen Shelley.

One of the most fulfilling aspects of the work is that they usually get to know the people they’re building houses for. “One of the most important things we do as volunteers is listen to stories, to the emotional trauma of disaster. That’s part of their healing,” said Karen Shelley.

“People would have given up,” said a fire survivor who was sharing dinner with the Mennonite volunteers. Because so much of the work is physically and emotionally exhausting — people could be hauling rocks or replacing fences — they get energy from working with volunteers, which in turn helps others, she said.

Not only does the work benefit the client, but it also helps the volunteers. Jim Shelley described volunteers who arrived shy and withdrawn and left feeling competent and animated.

They see the same effect on the clients. “Seeing the client relationship with the volunteers — there are tears every single week,” said Anders. “The kindness empowers the homeowner.”

“One client told us, ‘I’ve never had so many real friends in my life,’” said Jim Shelley.

“It’s both exhilarating and draining. There’s no way to describe the feeling of helping someone who’s been through so much trauma,” said Sally Unrau. Despite the energy and fulfillment they get from their work, “We’re ready to kick back in our recliners and watch nonsense TV,” she said.