Rebuilding has begun, but much remains to be done

One year after 300 houses and 260 other structures burned in the Carlton Complex Fire, there are many outward signs of recovery and rebuilding.

Drive around the valley, over the Loup, or up the roads to the drainages devastated in the blaze, and you’ll see hillsides dotted with new construction. 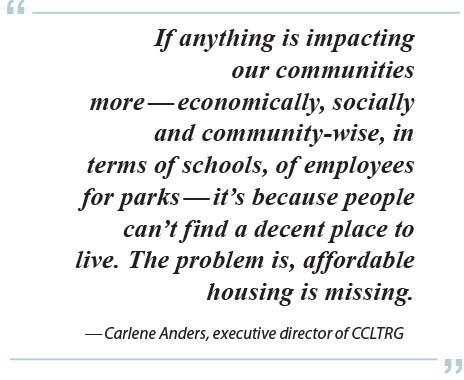 Many of the immense piles of fire debris have been cleared, but some people still need help carting away the piles of mangled metal, drywall and ash.

Other aspects of the long route to recovery are less obvious — and less streamlined. Some survivors say their rebuilding has stalled after they hit a hitch with insurance settlements; some have not even begun construction. Others are struggling because the fire piled onto already precarious economic or health circumstances. And some people are only now recognizing they need help.

As of June, the disaster case managers with the Carlton Complex Long Term Recovery Group (CCLTRG) had about 75 open cases, but they were still getting three or four calls each week from people contacting them for the first time, said Jon Wyss, chair of CCLTRG. “Every time it rains, we get a new client,” he said.

Despite the progress in rebuilding, relatively few houses are actually finished, so people are still renting or staying with friends or family.

As of the end of June, the Okanogan County Building Department had processed building permits for 67 houses and 27 manufactured homes for people who lost their homes in the fire. The department has also issued permits for 43 garages and outbuildings.

The long-term recovery group has started work on eight of the 11 houses it is building in phase 1 of a program to house people who had no other resources. The first foundations were poured at the end of April and volunteers are now working on interiors for seven of the houses, according to Carlene Anders, executive director for CCLTRG.

Those houses are dispersed throughout the fire zone, from the Methow Valley to Pateros to the Chiliwist, said Anders. They are being built mostly for older individuals or couples, all of whom were uninsured, said Anders. Even though they had lived in their homes for decades, many of these people were not able to buy insurance because their house was too far from a fire station or off the grid, she said.

Some CCLTRG clients are contributing financially or helping with labor, but some are not able to provide either, said Anders. “In the first phase, these are folks that just flat need help,” said Anders. “They would otherwise be living in unsafe conditions.”

The group estimates they will build 40 houses over three years. They have also helped situate two families in manufactured homes, said Anders.

The long-term recovery group is offering houses with one, two or three bedrooms, from 560 to 1,100 square feet. Clients must be willing to accept one of these houses, but they do have some choices, such as the location of the porch and types of flooring and cabinets, said Anders.

As it raises additional money, CCLTRG will confirm arrangements with other clients. The organization anticipates moving ahead with the list for phase 2 — probably 15 more houses — at the end of the summer, said Anders.

Everyone is carefully vetted by the disaster case managers and the CCLTRG board, including a verification of income and legal documents, said Anders.

“Identifying the people for phase 1 was pretty easy,” said Anders. “People were sleeping on drywall — it was very clear. There is no way these people could recover without assistance.”

Still, it has been hard to tell people they’ll have to wait longer for help. “If I have to stay with friends for one more winter, that’s OK — but it’s getting awful small,” Anders said one client told her.

Some fire survivors have left the area but hope to return if they can find suitable housing, said Anders.

Insurance — some help, some hassles

People who had insurance — a little over half of the total who lost homes in the fire — have been able to draw on financial assistance for temporary housing and a settlement to help with rebuilding or buying an existing house. 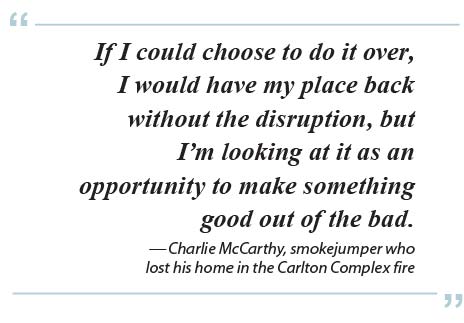 Many homeowners reached a speedy settlement with their insurance company, but some have encountered hurdles. Charlie McCarthy, who lost his home on the Loup, had to hire an attorney and his own appraiser to get what he considered a fair settlement. Haggling with the insurance company delayed the start on his new house. “It was not a pleasant experience — I’ve barely started rebuilding,” said McCarthy.

In the meantime, McCarthy, his wife, and his two children have been moving from one rental to another.

McCarthy is using the opportunity to put his house in a safer spot on his property, out of the path of potential flooding from Frazer Creek. “The house would have flooded if it hadn’t burned,” he said.

McCarthy, a smokejumper at the North Cascades Smokejumper Base, was deployed on a fire in Idaho when the Carlton Complex Fire came through. “It was pretty shocking — it’s pretty ironic that you’re on a fire when your house burns down,” he said.

He had thinned the trees around his house and always thought his house was pretty safe. In fact, he lost only about 10 percent of his timber to the fire, he said.

The destructive flood and mudslide that swelled Frazer Creek were even more surprising, said McCarthy.

The Methow Salmon Recovery Foundation raised more than $1 million from state, federal and tribal sources to build bridges across the creek to replace driveways and culverts too small for the vulnerable creek, according to Chris Johnson, the foundation’s president. The foundation has already installed six bridges and will put in another four. In addition to preserving access to houses, the project restores fish passage in Frazer Creek and will revegetate the riparian area.

Without the bridges, area residents would no longer be able to access their homes, since the creek has flooded several times since the first severe flood last summer, said McCarthy.

Susan Speir and Dave Hopkins, who lost their home on Finley Canyon, decided not to rebuild but instead to buy an existing house.

“It’s such a long haul on Finley. There’s no infrastructure anymore,” said Speir. While they had assistance cleaning up the site, there is still a lot of broken glass and debris on the property, and it was too physically and emotionally exhausting to tackle it, she said.

“I can’t imagine what would have happened if we hadn’t found a place to live,” said Speir, who said that the cost of rebuilding the entire infrastructure — water, septic, power — was prohibitive.

Their insurance settlement enabled them to buy and remodel a smaller house. “We’re very lucky, in some ways,” she said. Friends were extremely generous with furniture and other household supplies, said Speir.

But even buying an existing house wasn’t easy. They made two offers but withdrew them after structural issues were discovered.

“We’re good here — it’s a big house with a big yard. We’re tired,” said Speir. “Our desire is just to sit still. Down the road, we may rally to build something there [on Finley Canyon].”

For renters — even the small percentage who had insurance — the situation remains bleak. Insurance covered their personal belongings, but not the structure they lived in. While they may have received financial help or vouchers for rent, the traditional network of resources that CCLTRG has provides little substantive help for these people, said Anders.

“Helping renters has been the toughest thing of all. The VOADs [Volunteer Organizations Active in Disaster] say it’s always the toughest,” said Anders.

For example, CCLTRG can build houses only for people who have lost their primary residence and have a clear title to the land. These criteria don’t let them help a landlord rebuild rental property.

One family who lost their rental in the fire said they had contacted “everyone and anyone who could help” — the Red Cross, volunteers, the county sheriff. “There were lots of promises, but it seemed like a lot of hogwash,” said a family member who declined to be identified.

They spent two months living in a tent and have moved more than once since then, and are now making do in a travel trailer. The disaster-relief people told him that if he can buy property, he can get on the list for a house, he said.

Another family of five has been living in one room since their rental home burned. They too are frustrated that they haven’t gotten the help they need from the disaster case managers.

More than one person reports that some landlords have raised rents by hundreds of dollars a month and that some vacation homeowners wanted to charge $2,000 or more.

The main thing CCLTRG can offer renters to help them obtain long-term housing is through an agreement worked out with Washington Federal bank for loans with low interest rates and reduced fees. If people can
qualify — and buy land — they may be eligible for one of the CCLTRG houses, said Anders.

“If anything is impacting our communities more — economically, socially and community-wise, in terms of schools, of employees for parks — it’s because people can’t find a decent place to live. The problem is, affordable housing is missing,” said Anders.

A lot of these people have been assisted through the unmet-needs roundtable, which they turn to after the disaster case managers have exhausted all other options, such as volunteers, grants and donated materials.

The housing situation also put some people on even shakier ground — some lost their jobs because they had to relocate after losing their home.

CCLTRG has helped some renters find new rentals but, with a shortage of rentals and restrictions on assistance, that too has been difficult, said Anders. Rent vouchers available through Okanogan County Community Action Council can only be put toward apartments and houses that rent for $500 a month or less, and these are increasingly hard to find.

Community Action has applied for grants for two multi-family affordable housing projects, but there is nothing definitive at this point, according to CCLTRG.

Despite his frustrations, McCarthy realizes his family is comparatively fortunate. “If I could choose to do it over, I would have my place back without the disruption, but I’m looking at it as an opportunity to make something good out of the bad,” he said.