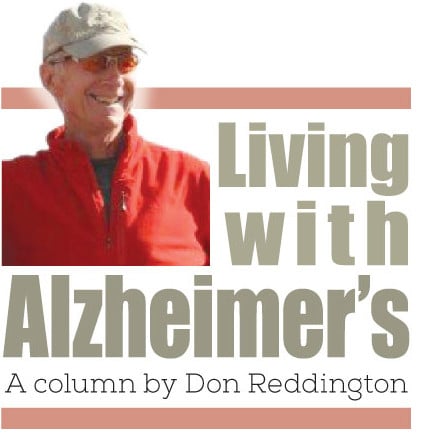 Editor’s note: This is the fifth of a monthly series of articles that will be written by Methow Valley resident Don Reddington, which will explore the issues of living with Alzheimer’s disease. The articles will be written in collaboration with Raleigh Bowden, M.D., Katie and Josephine Bristol and Methow Valley News reporter Laurelle Walsh, with research assistance from Wild Iris Medical Education.

Forgetfulness can be a normal part of aging. As people get older, changes occur in all parts of the body, including the brain. As a result, you may notice that it takes longer to learn new things; you don’t remember information as well as you once did; or you can’t remember where you put things, like your glasses or your keys. For most people, these are signs of mild forgetfulness due to aging, not a serious memory problem.

For several years before my diagnosis of Alzheimer’s disease, I knew there was something going on. I was having problems with my memory, but friends would say to me, “Don, you don’t have Alzheimer’s, you are just getting old.”

I was still troubled, so I went to our family doctor, Dr. Ann Diamond, and told her about the memory problems I was having. She gave me an initial test that showed I had some memory loss, but nothing definitive. She told me we should keep an eye on it.

Over the next four years there were many indicators that my problems were getting worse. My wife, Ginger, would talk about going to certain places or visiting certain people and I wouldn’t remember who they were. I started writing things down — where I was going to go, what I was going to do — which helped, as long as I remembered to check my notes.

When we were sitting around the dinner table with friends or at a cocktail party, it seemed that people would talk too fast and I couldn’t keep up with the conversation.

Ginger and I have always been very active — skiing, horseback riding, mountain biking — but at the start of one ski season, I began to notice that I was having problems that I wouldn’t normally have. I noticed I wasn’t quite as confident on skis. Once I got going it all came back, but I could feel that I had lost some ability that I had had before. I also noticed some difficulties riding my bike that I didn’t have before.

I always read and comprehended high-level information as part of my professional life. After I retired, I started having a lot of trouble with reading, and I became really concerned. I asked the Twisp librarian if there was anybody who could help me with reading, and she connected me with Chris Holm, a retired teacher. I told her that I was worried about losing my ability to read. She tested my reading and gave me some information about memory loss. Chris and I met two days a week for a couple months until it just became too hard for me.

After I retired, I did some pro-bono financial consulting for local nonprofits. I was OK as long as we were talking numbers, but when they started talking about other things, I couldn’t understand what they were talking about. And I didn’t take the time to learn it because acquiring new information was just too hard.

I became uncomfortable at meetings; I didn’t know the people and I couldn’t remember their names. I was getting lost, and I felt I just wasn’t being effective, so I told them it was time for me to resign.

At that point, for me, the problem was memory loss along with the fear that it was something else. It’s terrible not knowing, always wondering what’s going on.

Around four years after the initial test, I went back to Dr. Diamond and told her I was getting worse. She referred me to a neurologist. Before I went in for testing, I sat down with my friend, Dr. Raleigh Bowden, and we talked about what might be happening. Can you imagine what that feels like? You think you might have it, but you’re not sure yet.

The neurologist performed a memory test and ordered an MRI of my brain, blood tests, and spinal tap. These tests rule out other diseases and show vital information for a diagnosis. At the next appointment I learned that I had Alzheimer’s disease. That was about a year and a half ago now, and for Ginger and me, it was a life-changing moment!

My “brother in arms,” Jerry Bristol, was diagnosed with Alzheimer’s about five years ago. For several years prior to that, his family noticed that Jerry was having increasing difficulty finding the right words and recalling names of people and places. He was having a hard time writing. As Jerry’s daughter, Katie, recalls, “We remained in denial, determined to believe that Dad was simply getting older and more forgetful, that this was simply the natural aging process.”

To Jerry’s family, it seems like the disease has simply magnified some of his personality traits. According to Katie, Jerry has never been able to multi-task, so when he became able to focus only on one thing at a time, it seemed to be a natural extension of himself.

Jerry has always been a kind, gentle and generous person. But because of his lack of good judgment due to Alzheimer’s, his family was forced to limit the cash in his wallet; otherwise, he would simply empty it into the tip jar at the Cinnamon Twisp Bakery.

Early signs of dementia may be more obvious to family members or friends. And people with memory loss or other possible warning signs of Alzheimer’s may find it hard to recognize they have a problem, or may be in denial, and resist following up on their symptoms.

Early diagnosis gives patients and their families more time to plan for the future. While the person with Alzheimer’s is still able to participate, he or she can help the family make decisions about short- and long-term care options, end-of-life decisions, and financial and legal matters. And although it’s not easy, knowing the source of your troubles might lessen anxiety about the unknown.

For Jerry’s wife, Josephine, planning for the future was one of the most important things they did together after Jerry’s diagnosis. “Once they get to a certain stage, there’s no way for them to articulate what they want,” she said. “It’s never too early to do it.”

There is no single test that can show whether a person has Alzheimer’s, but scientists are now exploring ways to help physicians diagnose the disease earlier and more accurately. While physicians can almost always determine if a person has dementia, it may be difficult to determine the exact cause. Diagnosing Alzheimer’s requires careful medical evaluation, including a thorough medical history; mental status testing; a physical and neurological exam; and tests, such as blood and urine tests and brain imaging, to rule out other causes of dementia-like symptoms.

Medicare’s new annual wellness visit includes assessment for possible cognitive impairment as part of the patient’s overall condition. It is hoped that with this change, earlier detection will be more common.