When Dave Schulz first stepped onto a court as a high school tennis coach nearly 50 years ago, Lyndon Johnson was U.S. president and a nickel could buy a Hershey bar or first-class postage stamp. In Seattle, a McDonald’s Hamburgers sign proudly proclaimed “Over 2 million sold.” In the world of sports, Billie Jean King won the women’s singles championship at Wimbledon.

The year was 1966 and the subsequent decades of teams, tournaments and trophies now find Schulz the longest active tennis coach in Washington state, and most likely one of the longest tenured in the nation. (Rumors that an early Schulz racquet was discovered among relics in a fossil dig appear to be unfounded.)

Along the way, Schulz has accumulated a trunk full of memories to go along with a pile of Coach of the Year honors. The net results of those years of experience come full circle when in his travels Schulz encounters former students who now have sons or daughters playing tennis or an alum who is a tennis coach in his or her own right.

For Schulz, it all began when a local civic group laid down a large slab of concrete, but we’re getting ahead of the story.

The Schulz family moved to the Methow in the 1930s, where Dave’s father converted a Benson Creek farm into a Holstein dairy and started the valley’s first Dairy Association. At a young age, Schulz acquired the habit of rising early to help milk 30 to 40 cows. While still a pre-teen, he lost his father in a tractor fire.

The first school Schulz attended was on Lower Beaver Creek where the kids “used to play cops and robbers” among the memorial markers in the cemetery just over the hill. Transferring to the larger school in Twisp “was a big change for me,” Schulz remembers.

“In 1950, the Twisp Kiwanis built the tennis courts just north of the school,” Schulz said.

That’s when the future coach picked up his first tennis racquet as a 14-year-old sophomore. 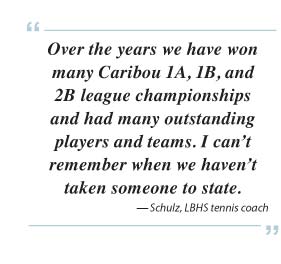 Following high school graduation in 1955, Schulz “worked at the mill a couple of years” before joining the U.S. Air Force. A multi-sport athlete, Schulz played tennis, basketball and volleyball throughout Oklahoma, Texas, Louisiana and Kansas for the Strategic Air Command and received the second Air Force’s Outstanding Athlete award.

Schulz married Dee Shaw while stationed in Oklahoma in 1959 and started a family that eventually included son David and daughters Debbie, Deana, and adopted daughter, Denise.

Back in the valley, Schulz engaged in a number of career ventures that included timber stand improvement work, motel owner, orchardist, and Okanogan County Commissioner from 1992-2006. Early on he joined forces with coach Robin Eliassen.

“Robin loved tennis and kids and he coached from the mid-1960s to his death in 1994,” Schulz said. “Robin asked if I would help coach grade school basketball and tennis so I became his assistant in 1966.”

Schulz became head tennis coach when Eliassen died in 1994. Team practices and games moved to the new Liberty Bell High School campus when courts were installed there in 1999.

“Over the years we have won many Caribou 1A, 1B, and 2B league championships and had many outstanding players and teams,” Schulz said, and added, “I can’t remember when we haven’t taken someone to state.”

Reflecting on so much talent over so many years didn’t make it easy for the coach to single out the best, but the 1982 and 2008 teams stand out.

“The 1982 boys played the Eastmont High School varsity tennis team in Wenatchee and beat them, 5-0,” Schulz said. “It was a big upset of a very good team.”

Among those who came to mind on the ’82 girls’ team were Tracy Day, Carla and Julie Christensen, Michelle Finley, Jamie Forsythe, Laura Laskey, Jennifer Mendro, “and others,” Schulz said.

“The best player for the Lady Lions was Jennifer Paluck,” Schulz recalled. “At state she played a girl who was ranked in the top 15 in the nation and gave her a good match.”

Another outstanding Lady Lion was Dawn Eliassen, daughter of the late coach and Chris Eliassen. Dawn, who placed third at state in 1994, is currently in her 15th year as tennis coach for the Medical Lake High School Cardinals.

“Manuel and Carlos Perez have dominated 1B, 2B, and 1A for the last five years,” Schulz said.

Courtesy of LBHS yearbooks are some glimpses of past varsity tennis teams and players:

1984: Karla Christianson, Bruce Akker, and Daren Belsby were part of the team “that made a strong showing at the NCW B tournament,” according to coach Eliassen.

1990: Boys and girls were league champs. Captains of the 26-member team were Michael Shaffer and Belinda McAdow.

1991: Boys and girls won B league championship. Girls were state academic champs with a GPA 3.93

1992: Team GPA above 3.2. Dawn Eliassen placed third in districts and eighth at state.

1997: A record turnout of players. Jennifer Paluck, undefeated in the CTL, took first at district and third at state.

1998: Another large turnout with more than 20 players. John Syenzes and Jennifer Paluck competed at Caribou Trail League districts and Paluck advanced to place sixth at state.

1999: 21 players among whom were Landon Fisher, Karissa McLane and Lindsay Barksdale.

2001: Among the team’s 20 players were Devin Lloyd and Andrew Tuller.

Schulz said his most embarrassing moment as a coach took place while he was serving as a county commissioner and was the scheduled speaker at a county hearing.

“A phone call came in from the bus and tennis team,” Schulz said. ”They were waiting for me outside the courthouse. I was 20 minutes late before the bus could leave for the match.”

When time allows, Schulz competes nationally in a United States Tennis Association adult league for the Wenatchee Racquet & Athletic Club where his team has finished as high as third and fourth place at nationals.

A father-son tournament ranks as one of Schulz’s most memorable matches.

“When [son] David was playing we ended up in the Equitable National Father-Son Tournament in Portland, Oregon,” Schulz said. “We ended up one loss away from the national championship.”

When the discussion turns to Schulz’s coaching, the overall impression that remains with many of his contemporaries is his passion for the game.

“The boys’ doubles teams were still playing. It was getting dark and we finished under the lights,” Archer said. “As two of my boys were finishing up, there was Dave out on the court giving them some pointers. Now, that’s enthusiasm.”

One of the hazards — or blessings, depending on your view — of mentoring so many students is never knowing when or where you might later encounter one of them.

“After a triple bypass surgery in Central Washington Hospital,” Schulz said, “I was being taken down the hallway when a voice shouted out: ‘That’s my tennis coach. Treat him well.’”