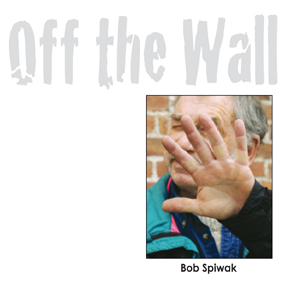 It was John Hayes’ idea that we should have a gathering to commemorate the demise of the old Weeman Bridge one evening back in 1984. What you read here is a combination of my memories, my wife’s recollections and the Methow Valley News of Aug. 23 that year. Quoted sections and photo are courtesy of the paper.

Along the length of the North Cascades Highway, the only stop sign from Sedro-Woolley to Winthrop was at the Weeman Bridge, a one-lane, wooden-decked structure. It created a real bottleneck.

We put the word out that there would be a candlelight-and-beer ceremony in mid-August. I think 75 or so people and a few dogs were at the site of the execution of the already-stripped arterial, brought here from the Olympic Peninsula in 1947. Local old-timer Greydon Patterson remembered this at the ceremony. His dais was the remaining half of the bridge.

He was part of the crew that rebuilt it for what was then the end-of-the-road highway. Patterson also was one of the workers who built a similar Mazama bridge. When he was asked if there was a farewell party for that bridge, which he helped to remove, he replied, “No, we just took a hammer and knocked it out.”

I wrote a song for the occasion and handed out lyric sheets for a melody. I don’t remember the name but it was well known. I tried to keep it light in nature, for this was to be an end-of-an-era occasion, however bittersweet. That bridge had tied both sides of the Methow River together, the only alternative being the then-gravel Goat Creek Road. Now, the new bridge was open to traffic and the occasional cars drove by overhead.

There were intermittent speeches, notably Patterson giving a history of the structure from its cross-state travels to its home over the Methow. Eleanor Drake, another old-timer, lived with her husband, Don, and their family in a home not many yards away from the doomed bridge.

“It is the end of an era,” the paper said. “The sleepy valley as we know it is no more. The new bridge and appurtenant highway will be a 55 (it was 45) miles per hour, limited-access thoroughfare but it has been engineered for 70. The pace of life, along with the traffic, will accelerate.”

None of these feelings were expressed during the ceremony, beyond a few overheard comments quietly spoken. Still, the mood was not morbid. The flowers people had brought as a symbolic gift to the old bridge were an accent or counterpoint to the lighted candle each attendant was holding.

There was humor involved as well, most notably when a virgin was sought to throw the ceremonial bouquet into the river. None were found and Bess Karro was either chosen or volunteered to represent purity among the delegation. Bess, everybody’s typical grandmother, tossed the flowers into the Methow and the crowd slowly dispersed into the darkness.

A few days later, we heard from Mary Thompson, owner of Trail’s End Motel in Winthrop, about a customer telling an employee of driving across the new bridge, seeing a mass of lighted candles below and concluding it was a coven of Satanists, and telling her husband not to stop the car under any circumstances.

From the News: “At 11:10 Friday morning a large bulldozer gave a tug, two cables tightened, and the bridge fell into the river. Less than half an hour later a man with a cutting torch went to work.”