Twelve Methow Valley Elementary School students travel up the road to Moccasin Lake Ranch on Tuesdays to spend several hours learning about horse care, horseback riding and, more importantly, to be involved in a positive learning experience that excites them, fully involves them, and builds confidence and self esteem.

Methow Valley Riding Unlimited (MVRU), the Methow Valley School District and the Public School Funding Alliance have teamed up for the ninth year of Let ’em Ride, a therapeutic riding program started by MVRU founder Annie Budiselich that provides an alternative learning environment to elementary students who have had less success in the traditional classroom.

Budiselich, with the help of mental health professionals, Methow Valley Elementary School teachers and volunteer assistants, has run a four-week session every fall and spring since 2006, with a different learning theme each session. Past themes have ranged from building relationships, to cooperation, to last spring’s theme: It’s a good thing we’re all good at something.

This session’s theme is problem solving; to practice, students and instructors play games and do team-building activities that reinforce those skills. In the second week of this session, a group of students put their problem-solving skills to the test by independently working out who was going to ride which horse that day.

Back at school, Let ’em Ride participants write personal reflections of their activities at the ranch, and may also read and review horse-themed literature.

Classroom teachers notice the changes in their students who participate in Let ’em Ride, and provide feedback to resource room teacher Laura Schrager after each session. One teacher told Schrager, “The day before Let ’em Ride, the kids definitely talk about it, look forward to it, and it creates lots of excitement and energy. This is especially great to see in certain kids who are generally low-key in the classroom.”

Schrager notes that one boy often missed a lot of school, but never missed the days he went to Moccasin Lake Ranch. Another student struggled with losing everything, but always had what was needed to participate in Let ’em Ride, Schrager said.

Licensed Mental Health Counselor Lisa Spitzmiller, who facilitated the program’s social/emotional component from 2009-2012, told of one boy who participated in the program over several years, and struggled a great deal with anxiety.

“Initially he was very fearful and his first days were marked with great anxiety, tears and refusal to even interact with staff or other students at times,” Spitzmiller said. “With support and encouragement he became increasingly communicative and took small steps over the course of many weeks: first, he was willing to help groom a horse, then sit on a horse, then take a few steps while on the horse, then be led, then ride independently, culminating in a trail ride in which he rode his own horse over the fields at Moccasin Lake Ranch.

“The transformation in his whole body was evident,” added Spitzmiller. “He had succeeded in something that he had never thought possible. It was a great metaphor for him to reflect on as he considered other areas of his life that caused him similar anxiety.”

Fourth grader Zoey Garner is in her third year riding at Moccasin Lake Ranch. She said, “It’s one of my favorite things about school. But I’m sad because I miss read-aloud on Tuesdays.”

Sixth grader Dalynn Floyd was sad that it would be her last year riding, but wasn’t sorry to miss math class while at the ranch on Tuesdays, she said.

“So many kids would benefit from it,” said Schrager, who rides the bus to the ranch with the students every week, and says it’s a way to deepen relationships with students in another setting. “I am then able to connect their insights from the ranch to the classroom setting.

“Like any therapy program, it is the cumulative effect of participation that students carry with them throughout their days at Methow Valley Elementary and beyond,” Schrager said. 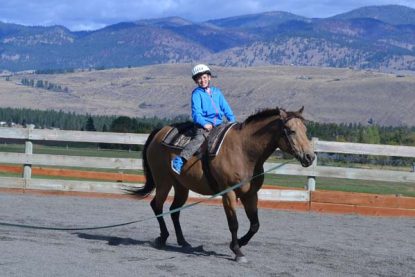 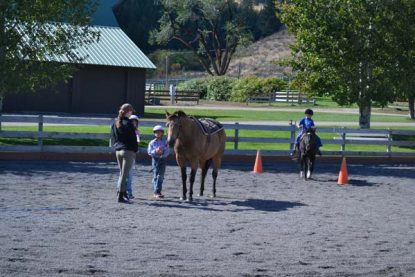 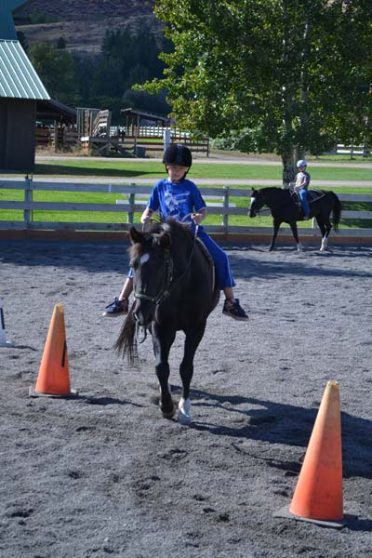 Autumn Edwards guides her horse through the cones with Sam Wottlin not far behind. Photo by Laurelle Walsh 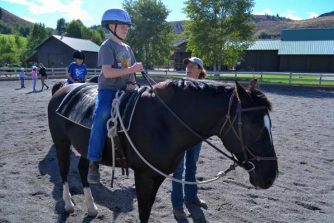 Dalynn Floyd gets riding tips from Annie Budliselich, with Sam Wottlin behind. Photo by Laurelle Walsh 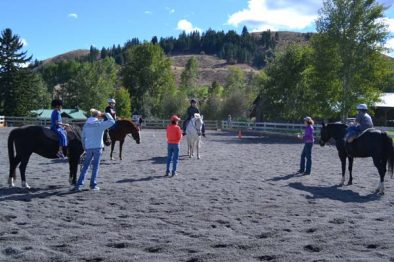 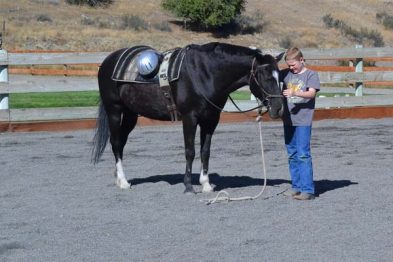 Sam Wottlin has a moment with his mount. Photo by Laurelle Walsh 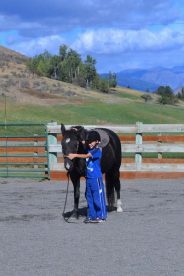 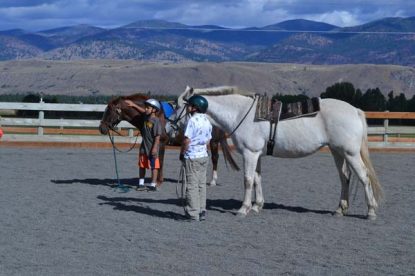 Merek Johnson and Timothy Ryan Darwin get reacquainted with their steeds and receive instructions before riding. Photo by Laurelle Walsh 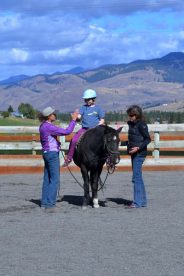 Zoey Garner gets a high-five from coach Annie B. after mounting her horse with assistance from Bo Thrasher. Photo by Laurelle Walsh 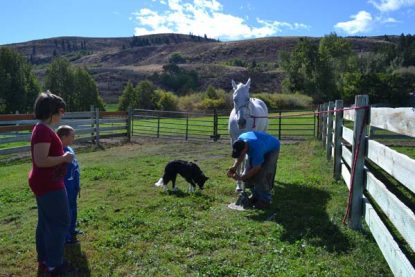 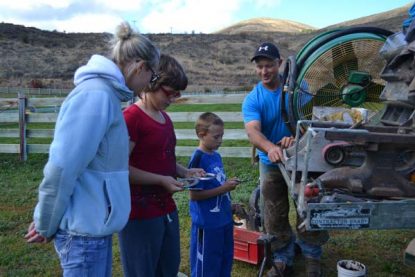 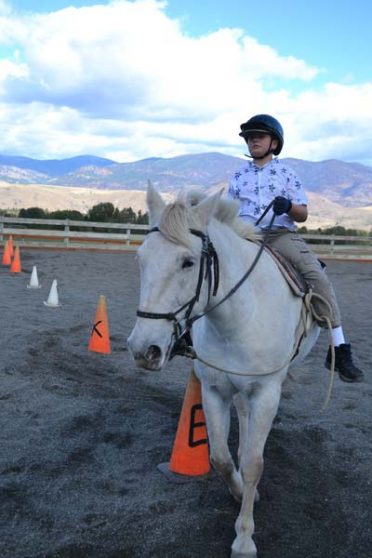 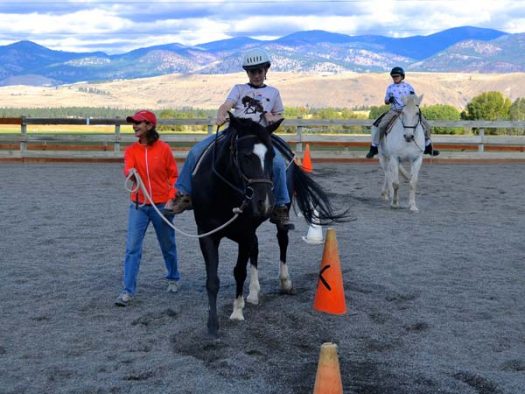 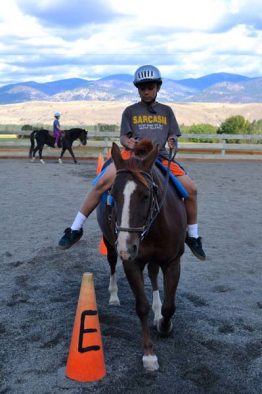 Merek Johnson with Zoey Garner behind. Photo by Laurelle Walsh 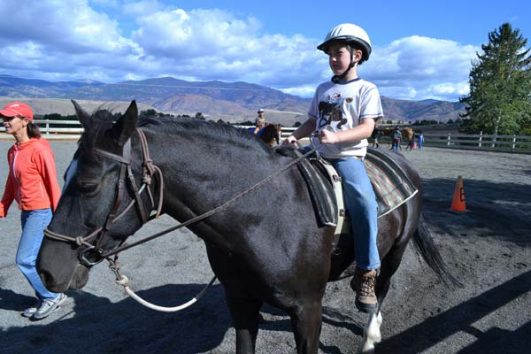 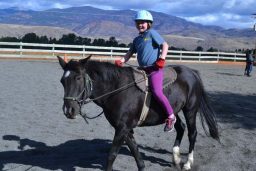 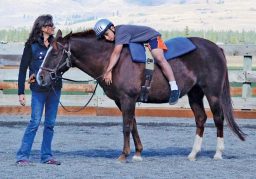 Merek Johnson gives his mount a hug before dismounting with assistance from Bo Thrasher. Photo by Laurelle Walsh