Research focuses on conflicts with livestock

Cattle ranchers Shauna and Dave Hicks said they had “mixed feelings” when they were asked to participate this summer in research investigating conflicts between wolves and livestock, funded by the Washington state Legislature.

“As most ranchers would say, the less you have to do with the government, the better off you are,” said Shauna Hicks.

In the end, though, they decided to become one of two cattle producers in the Methow Valley to participate in the research project.

“The reason we got involved is you can’t complain about a problem if you don’t take a part in finding the solution,” Hicks said.

Like many ranchers, the Hickses say their business is harmed not just when wolves attack cattle, but also by the mere presence of wolves in grazing territory.

“Any predatory presence is going to affect your cattle,” Hicks said. When wolves are around, cattle become stressed and lose weight, she said.

But, Hicks acknowledged, “it’s so hard to actually prove.”

That question — what are the indirect impacts of wolves on cattle? — is among the topics to be investigated in the multi-year study led by researchers from Washington State University (WSU).

The Hickses and another local rancher, who was not identified by researchers, were asked to participate in the study because their grazing allotments on U.S. Forest Service land overlap the territory occupied by Lookout Pack gray wolves.

The Hickses manage the PMM Ranch on Twisp-Winthrop Eastside Road for Del and Donna Prewitt. In the summer, the cattle are moved to higher elevation grazing areas around the Methow Valley.

In early May a research team from WSU came to the Methow Valley and worked with the Hickses to place ear tags on 30 calves and GPS collars on three cows. The other rancher’s herd has four collared cows and 40 ear-tagged calves.

The collars and tags emit radio signals so the location of the cattle can be tracked. If a calf stops moving, the tag emits a “mortality signal” to alert researchers so they can locate the calf and determine the cause of death.

The cows’ collars also store data that can be evaluated at the end of the season to provide information on the cows’ movements.

State wildlife officials in May trapped a female wolf in the Lookout Pack and placed a GPS collar on her. That allows biologists to monitor her location and potentially other members of the pack, assuming the wolves travel together. 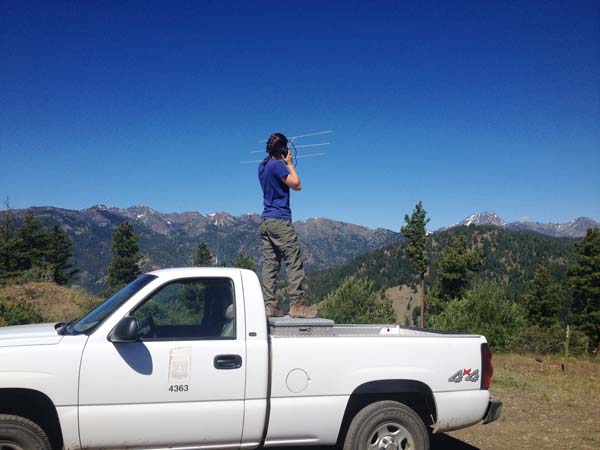 No predations so far

With monitoring devices on both cattle and wolves, the study had the pieces in place to investigate the interaction between wolves and cattle.

“Currently there have not been depredations on tagged calves that we are aware of,” Zoe Hanley, a doctoral student leading the field research in the Methow Valley, said last week.

The study encountered some unexpected variables as a result of this summer’s fires on Forest Service lands on or near some of the grazing allotments involved in the research.

“Things did change after the fire went through. That’s when the wolves started running through cattle territory. They did move as a result of the fire [that] burned some of the territory they range in,” Hanley said.

“Wolves are in the middle of cattle territory on a daily basis. There have been no problems so far,” Hanley said last week.

The wolves have also been moving through areas grazed by cattle owned by the other rancher participating in the study, Hanley said. A range rider has been provided by the state to help protect the herd as part of the study’s investigation into non-lethal approaches to preventing conflicts, Hanley said.

To evaluate whether cattle are negatively affected by the proximity of wolves, researchers check hormone and nutrition levels in cattle feces, Hanley said. The presence of certain hormones such as cortisol, or changes in nutrition levels, can indicate stress, she said.

The researchers are also documenting the kill rate of the wolves’ natural prey, such as deer and moose.

Although Hicks said she has seen wolves in the past while moving her cattle in the mountains, “we’ve not personally experienced any wolf/cattle interaction.”

Cattle will respond to the presence of wolves or other predators by being nervous, changing their grazing patterns and losing weight, Hicks said.

“They don’t loaf, they worry, they’re on guard,” Hicks said. “Maybe where they like to normally get a drink of water is in a danger zone. They don’t water or graze as normal. Cows will move into a place because there’s good food. A wolf follows them, and the cows leave the good feed.

“A predatory pack of wolves will impact your cattle and increase the cost of running them, because you’re going to go up [to the allotment] more and check them, if you can find them,” she said.

“There are so many variables” in evaluating the possible impacts of wolves on cattle and cattle producers, Hicks acknowledged. That’s why she was interested in helping gather information to better understand the interaction of wolves and cattle.

“Both Dave and I are college graduates and feel continued education is important, and that includes educating ourselves,” she said.

“The [research] team we have worked with came in without a bunch of preconceived ideas. They came in wanting to learn what they could,” she said.

“Once they sent us the criteria … we tried to figure out what we could do to give them a good study.”

Hicks said they selected an older cow for collaring that had gone to the range many times, as well as a young cow with less experience, and another cow in between to provide variety in behaviors.

“If they wanted to do a study next year, we’d sign on,” Hicks said.

Hanley said researchers plan to return next summer. “This project is funded for four years and we will continue research in the valley next summer. We would like to work with the same livestock producers,” she said.

“It may be early 2015 before data from this field season is fully compiled and analyzed, and no conclusions will be drawn until we have a few years of data,” Hanley said.

In addition to studying the Lookout Pack in the Methow Valley, research teams are conducting similar studies of the Teanaway Pack and the Diamond Pack in eastern Washington.