Twenty Paschal Sherman Indian School students, plus faculty and guests, gathered last Wednesday (June 4) to celebrate the completion of the pit house they built on the grounds of the Methow Valley Interpretive Center in Twisp.

Joining them in a blessing ceremony were interpretive center board members Rob Crandall and Bruce Morrison, and Eric Wittenbach, who were all instrumental in the conception, research, design and construction of the traditional structure.

Interpretive center director Carolyn Schmekel presented Paschal Sherman Principal Ray Leaver with a certificate of appreciation for his school’s involvement in the project, and a silver Chief Joseph coin given as a “prayer token,” she said.

“No matter what tribe we come from, we should all work to make this a more free place,” Schmekel told the gathered students. “Feel free to think of this as your place. You’ve put all kinds of work into it.”

The pit house was conceived by Crandall, who also established the interpretive center’s Native Plant Garden, both of which are designed to educate visitors about the original human and non-human inhabitants of the Methow Valley and to be “a home for native people,” Crandall said.

In early 2013, Morrison and Crandall began researching designs of pit houses that were used by tribes around  the Pacific Northwest.

“Researching pit house design, I often felt we are a generation or two late, relying on archaeology and the elders’ oral history, leaving us to figure out how to put it together,” Morrison said. “Many design variations are evident across the region in response to available materials and local traditions.”

Crandall invited Paschal Sherman students to get involved, and over the course of the year 13 students, some of whom are no longer at the school, traveled from Omak to Twisp once a week to work on the structure. They helped gather local materials, such as ponderosa pine poles and cottonwood bark, and slowly constructed the pit house, following traditional principles such as orienting the entry door to the east.

Selecting the material was one of the strongest lessons learned by the students, Leaver said. “Determining the physical traits and types of plants needed for building certain sections of the pit house was a big part of the project,” he said. “The greatest importance of the project is the historical and cultural relevance that building a pit house brought to our students.”

In the blessing ceremony, the pit house and everyone gathered within were purified with sage smoke; Methow tribal elder Spencer Martin spoke; and a student drum group, led by instructors Michelle Matt and Tashina Gorr, sang sacred songs.

“Each and every one of you is here for a purpose,” Martin told the students. “Hopefully, in time you’ll all discover this.”

Coming up at the interpretive center

While the dedication and purification of the pit house was performed last Wednesday, it will be “unveiled” to the public at the Methow Valley Interpretive Center’s Last Sunday program on June 29, Schmekel said.

“From the white person’s perspective, the pit house is a historical artifact,” Schmekel said. “But from [the Native American] perspective, this is the living earth.” An interpretive sign will be installed to inform visitors about the pit house, she said.

At the same event, the interpretive center will debut a documentary film about the Charley family by Twisp filmmaker Carol Geertsema, who also made the film Methow Sisters, currently shown at the center.

Later in the summer, the Heart of the Methow Powwow will be held on the TwispWorks campus on Aug. 16, a one-day event this year, Schmekel said.

“It’s a traditional powwow, not a commercial event,” with dancing, drumming and an evening meal, said Schmekel. “We are continuing the healing and reconciliation process that was begun 12 years ago.”

The Methow Valley Interpretive Center is located on the TwispWorks campus at 210 Fifth St. For more information about these and other events, call the center at 997-4904 or visit the website, www.methowvalleyinterpretivecenter.com. 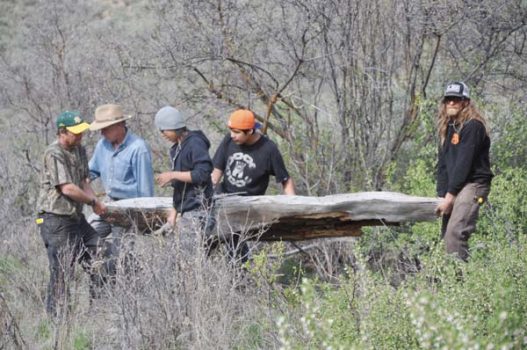 Students helped in the selection of materials for building the pit house. Photo by Ray Leaver 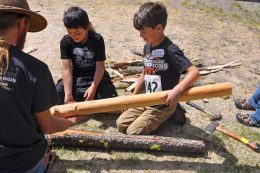 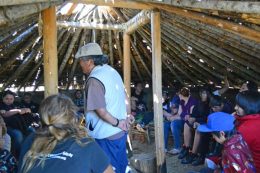 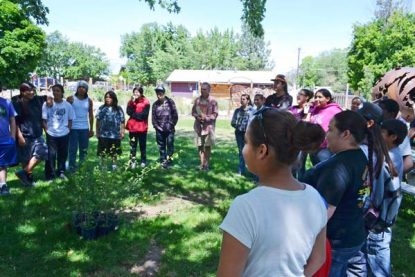 Students, faculty and guests of the Paschal Sherman Indian School gather after the pit house dedication. Photo by Laurelle Walsh 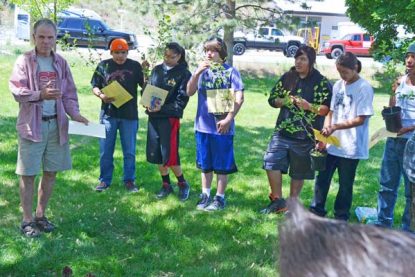 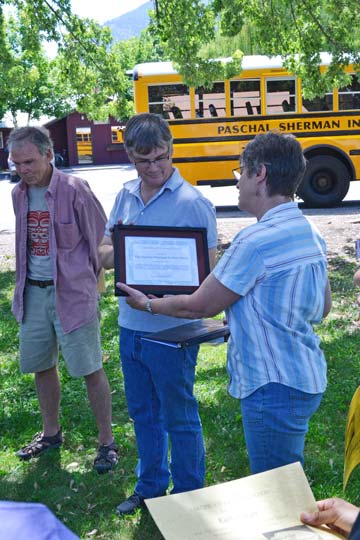 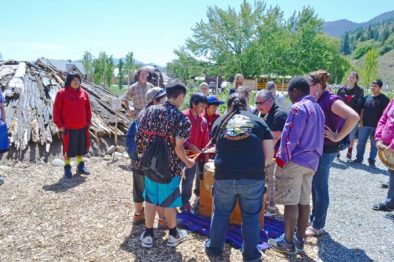 Michelle Matt and Tashina Gorr lead a group of Paschal Sherman Indian School students in drumming and song beside the newly completed pit house at the Methow Valley Interpretive Center in Twisp. Photo by Laurelle Walsh 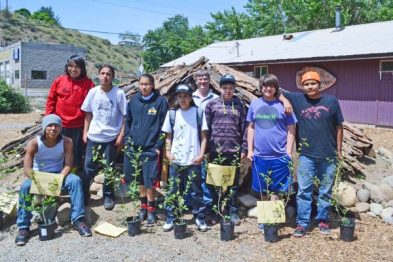