U.S. Forest Service officials said this week they are hoping to begin work on clearing the trail to Cutthroat Lake and Cutthroat Pass as soon as the snow melts, but a massive slide on the West Fork trail may not be cleared this season. In addition, the Forest Service is planning to temporarily close the gate at the bottom of the Harts Pass Road this week until a washout at Cache Creek can be repaired.

Two slides impacted the Cutthroat trail, said Methow Valley District Ranger Mike Liu. The smaller slide covered a section of trail just past a series of switchbacks after crossing the first bridge near the trailhead.

A larger slide, several hundred feet wide, dumped debris across the trail about halfway to Cutthroat Lake, said Liu, who skied and hiked into the area last week.

“That one not only took out a bunch of trees but pushed a small plank bridge that mountain bikers use a couple hundred feet down” the slope, Liu said.

“As the snow melts out, a trail crew — possibly working with volunteers — will have that cut out and passable,” Liu said.

He said the Forest Service often gets assistance from the Evergreen Mountain Bike Alliance and the Back Country Horsemen’s Association to repair trails.

“The West Fork impacts are much more significant, Liu said. “Until we can do a more thorough assessment, we don’t know if we’ll be able to open that section up again this summer.”

Mazama resident Eric Burr hiked along the West Fork trail last week as far as the huge slide about 1.5 miles up the trail, just below Trout Creek.

“This slide came off of Delancy Ridge, down about 3,000 vertical [feet], across the river and up the trail side to deposit this massive debris,” Burr said. Delancy Ridge is above the West Fork drainage and the trail runs along the opposite side of the river.

Burr estimated the slide area is about one-fourth of a mile wide, although he said he couldn’t see the other side of the slide.

The slide area is “covered with multiple layers of logs, etc., over … an estimated 20 to 30 feet of compact snow, which the river cut through. Hikers should be warned that huge unstable logs could roll down at any time, and crossing [the slide area] is not advised,” Burr said.

Delancy Ridge also released huge slides down its other flank this spring, dumping debris across the North Cascades Highway just beyond the Silver Star gate, and making the job of clearing the highway more difficult. State transportation officials said they had not seen slides of that magnitude in almost two decades.

The lack of snow for most of the winter, followed by heavy snowfall in the mountains after February, created unusual slide conditions, Liu said.

The area hit by the larger slide on the Cutthroat trail has been prone to avalanches in the past, he said. “But something of this scale, no. The scale of these avalanches are certainly bigger than normal and will take more crew time than usual.”

The West Fork avalanche may have damaged gabions that the Forest Service installed to stabilize scree slopes along the trail, said Jennifer Zbyszewski, recreation program manager for the Methow Ranger District. Extensive repairs to the trail may require the district seek grant funding, she said.

“If there has been significant damage to the trail where we’d need to relocate, it might be something we will plan this summer and implement next summer,” Liu said.

Spring runoff from Cache Creek created a washout on the road to Harts Pass, another popular recreation destination. The washout occurred about a mile beyond Dead Horse Point, Liu said. The gate at the bottom of the road will be closed this week to prevent access until the trench created by the washout can be repaired.

“We’re waiting for a little more of the snow to melt to get equipment up there,” Liu said. “We hope to have the road repaired by the time Harts Pass is snow-free.” 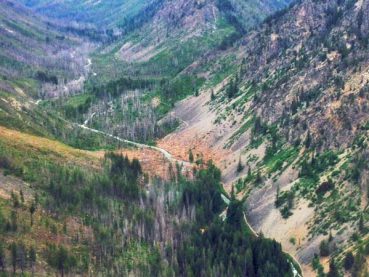 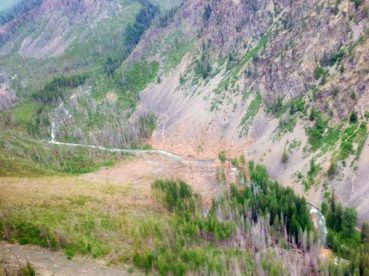 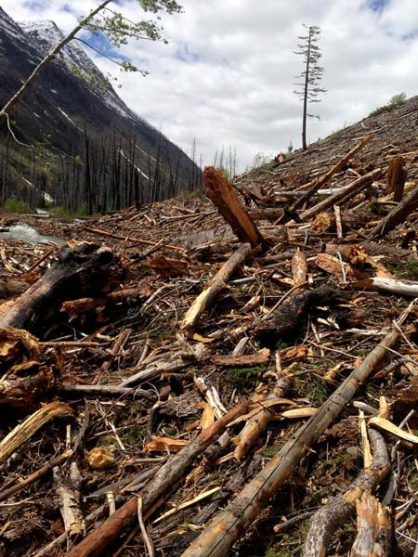 The slide on the West Fork Methow River Trail will take quite a bit of effort and time to clear. Photo courtesy of USFS 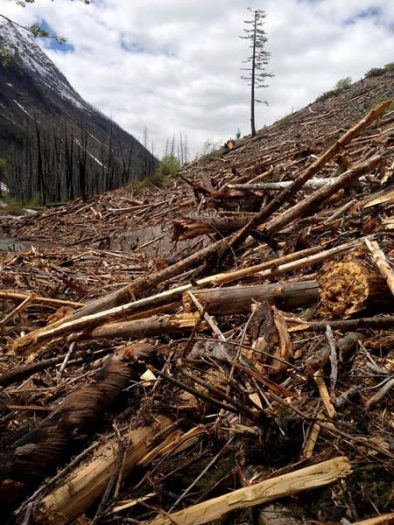 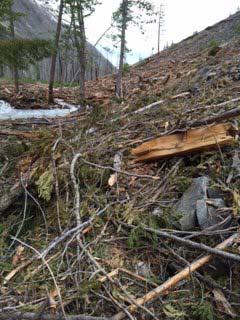 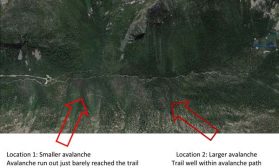 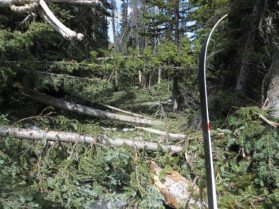 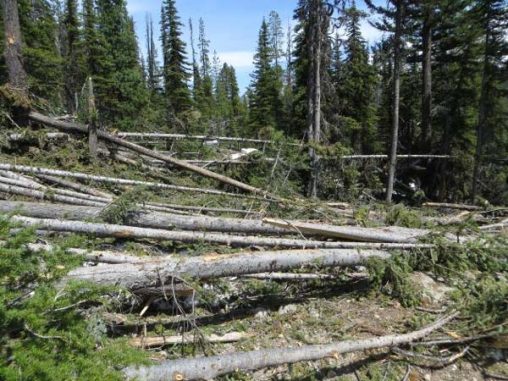 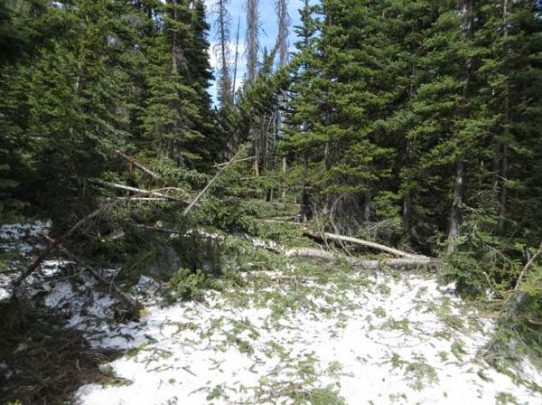 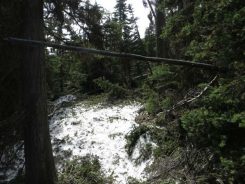 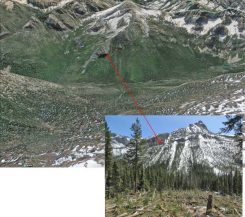 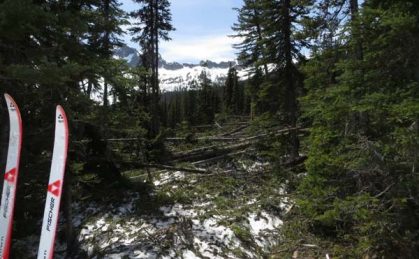 Location 2: View from trail looking West as you approach the avalanche from the East. Photo courtesy USFS 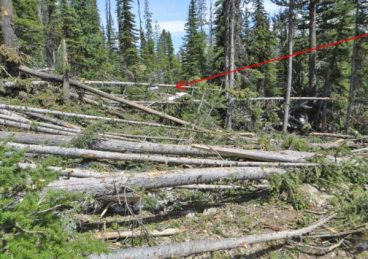 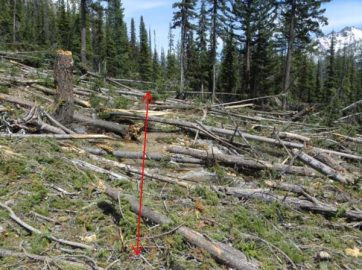 View from middle of the avalanche looking east along the trail (trail is show by red arrow.)Photo courtesy USFS 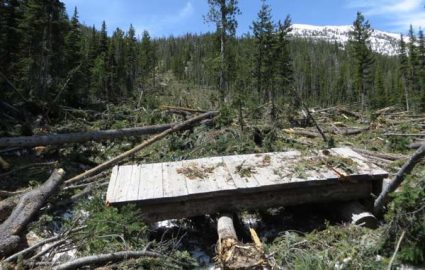 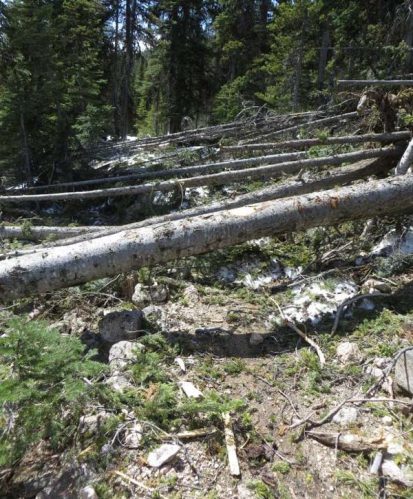 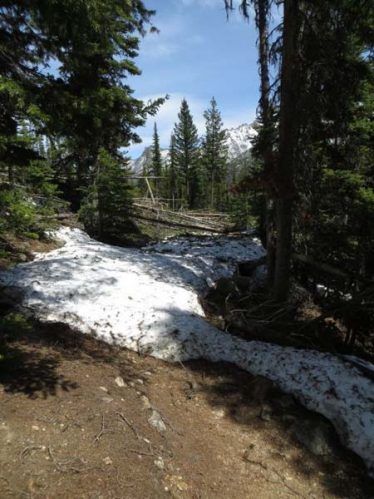 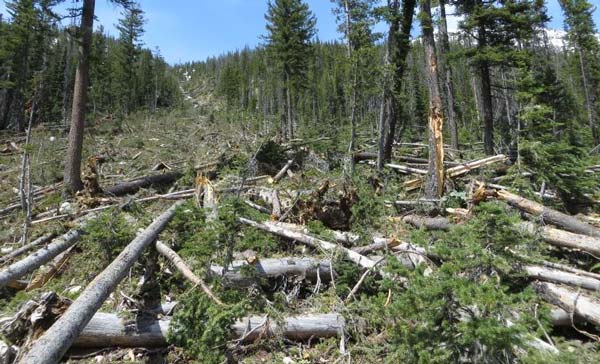