The Merc Playhouse has whipped up a gooey confection, Willie Wonka JR., for its spring musical, with the entire 32-member cast between the ages of 8 and 18, and many of the props created by young people.

“The kids have been rolling through their imaginations, bringing all this to life,” said director Missi Smith. Willie Wonka JR., which opens Friday (May 9), is Smith’s directorial debut at The Merc, although she has choreographed many shows at the theater, appeared on stage, and directed plays for the Methow Valley Theater. The show is also the Merc’s first children’s musical production.

The script combines the book Charlie and the Chocolate Factory by Roald Dahl and two movie versions, and includes many musical numbers from the films. It follows five children (each of whom found a winning gold ticket inside a candy bar) on a tour of Willie Wonka’s candy factory. Four of the five are spoiled brats; Charlie (played by Myles Davis, in his first role at the Merc) is a hard-working boy from a poor family who tours the factory with his grandfather (played by 9-year-old Nicholas White).

Along the way, some of the children can’t contain their appetites and ignore Wonka’s rules, landing in some amusing predicaments (and in some sugary vats and other sticky messes).

With the elaborate sets and props that move on and off the stage—everything from a chocolate-smelting pot to a fizzy floatation drink to a TV that swallows one of the kids—Smith said assembling the show had been almost like choreography. “It’s motion-heavy,” she said.

The cast studied the book and both movies and drew on the elements they liked best to animate their roles, said Smith. They also devised an ingenious and charming back-story for the 21 Oompa-Loompas, the legion of workers at Wonka’s factory, she said.

Many of the actors are on stage for the first time, but some are veterans of both acting and directing at the theater, including Morgan Tate, who plays Wonka. All the adult roles—various sets of parents and grandparents, some of whom join the candy-factory tour—are played by kids.

High school senior Dana Anderson is handling costumes as her senior project. Other young people are doing lights and sound for the show.

In addition to the regular performances, the cast will present selections from the play for elementary school students in two special performances at The Merc.

This will be the last chance to see the show on stage before a production is staged on Broadway next year and rental rights are suspended, said Smith.

Willie Wonka JR. runs from May 9 through 18, with performances Fridays and Saturdays at 7 p.m. and Sundays at 2 p.m. at the Merc Playhouse in Twisp. Tickets are $12 for adults and $5 for those 18 and under. A pay-what-you-can performance will be held on Thursday, May 15, at 7 p.m. 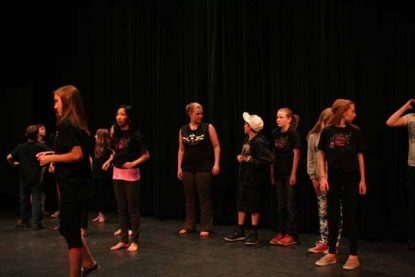 Prior to beginning rehearsal, director Missi Smith leads the cast through a series of warm-up exercises. Photo by Darla Hussey 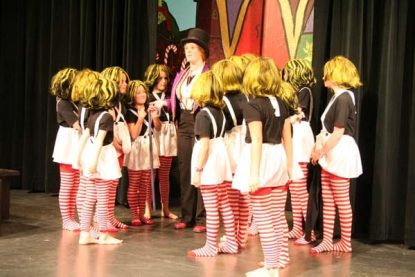 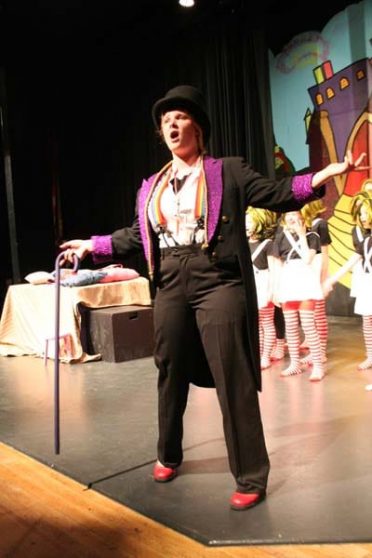 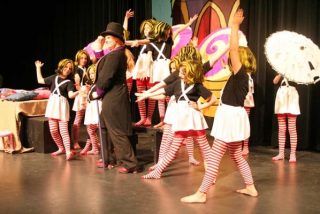 Wonka and the Oompa Loompas perform one of many musical numbers. Photo by Darla Hussey 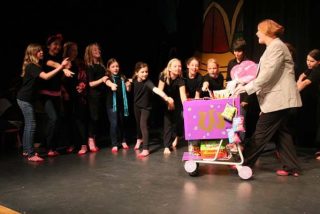 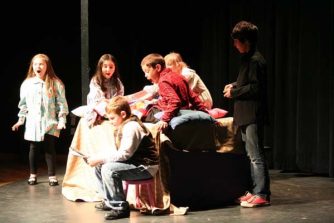 The Bucket family faces a series of difficulties. Photo by Darla Hussey

All golden ticket developments are reported by the media. Photo by Darla Hussey 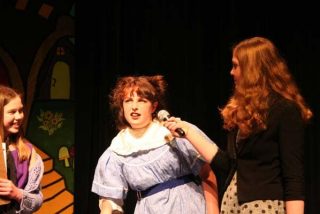 Mike T.V. is enthralled by the technological aspects. Photo by Darla Hussey 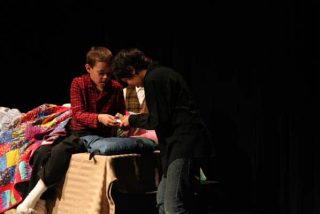 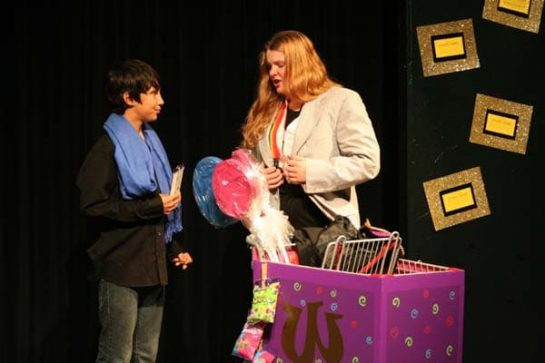 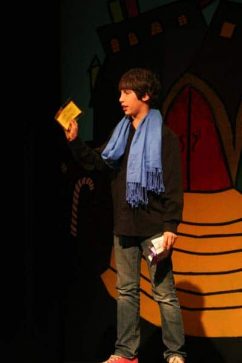 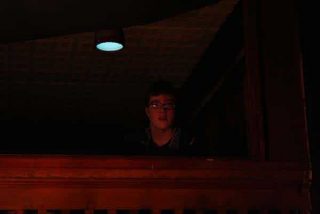 Sound and light support is also being handled by local youngsters. Photo by Darla Hussey 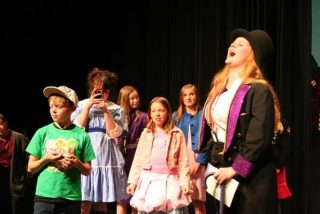 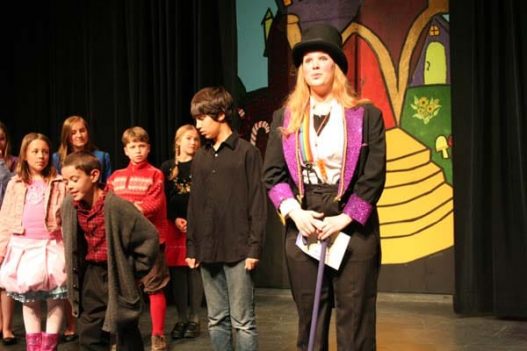 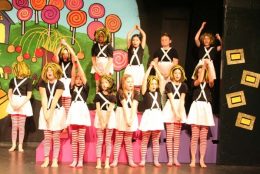 There are 21 Oompa Loompas in the production. Photo by Darla Hussey 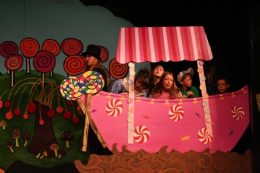 The many props and backdrops were created by young people as well. Photo by Darla Hussey 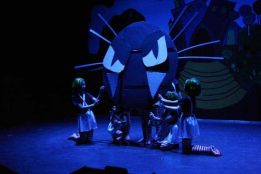 The props are primarily created by young people. Photo by Darla Hussey 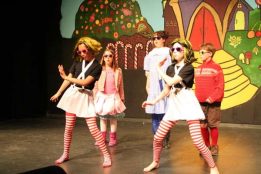 The Oompa Loompas and the children who didn’t pass Wonka’s test perform entertaining — and educational — musical numbers together. Photo by Darla Hussey 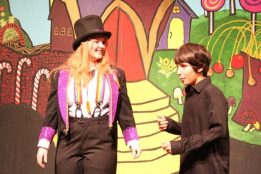 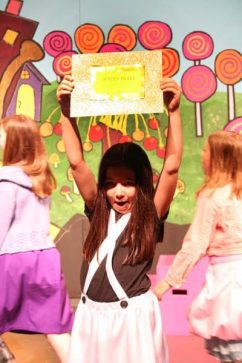 The golden tickets are key to Wonka’s plot to retire. Photo by Darla Hussey 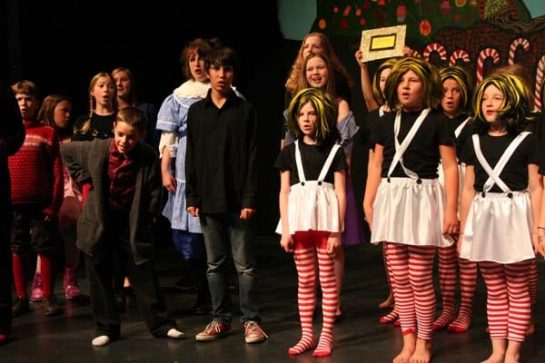 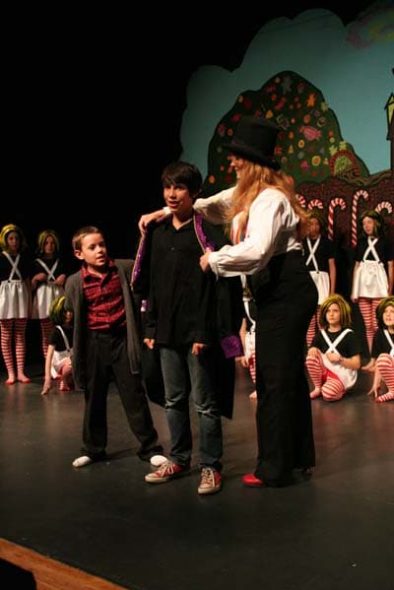 In the end, Wonka (Morgan Tate) rewards Charlie’s (Myles Davis) good choices and ethical behavior by giving him the factory. Charlie’s grandfather (Nicholas White) and the Oompa-Loompas look on. Photo by Darla Hussey 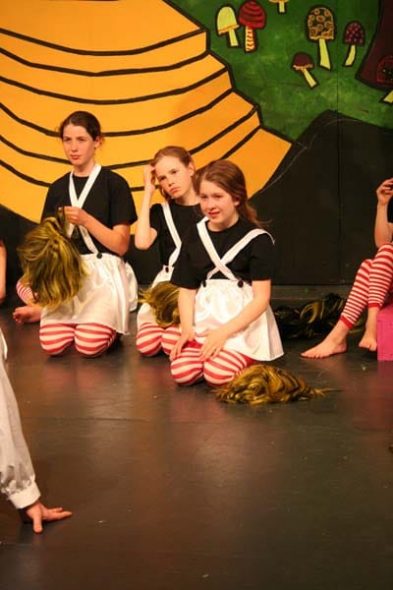 The Oompa-Loompas are relieved to remove the wigs after the production is over. Photo by Darla Hussey 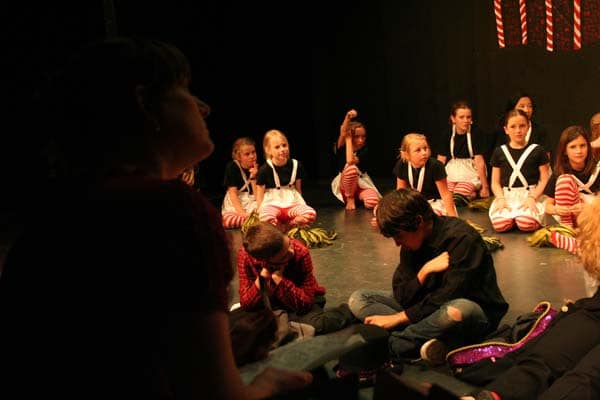