In response to citizen concerns about branches, tree trunks and large root wads deposited on a steep embankment on Texas Creek, representatives from Okanogan County Public Works and the Washington Department of Ecology have discussed the county’s practices for handling vegetation and brush.

Representatives of the county and the state agency plan to meet at the site next week to go over best-management practices, according to Joye Redfield-Wilder, communications manager for Ecology.

A citizen called Ecology on Friday (April 25) and made a confidential complaint about big piles of branches, roots and other debris from trees that Okanogan County dump trucks had been depositing on a steep slope above Texas Creek, about two miles from Carlton, according to Redfield-Wilder.

A representative with Ecology’s Shorelands program spoke with the complainant on Friday and with Okanogan County Engineer Josh Thomson on Tuesday (April 29), said Redfield-Wilder.

The county has been very responsive and has described to Ecology how it will dispose of trees, and will implement controls to avoid problems in the future, said Redfield-Wilder. “This is a technical-assistance issue for best practices of the county, not an official order or correction action,” she said.

The complainant told Ecology that someone at the county had explained that the debris had been placed to help shore up the road, according to Redfield-Wilder.

Texas Creek area residents said they had seen trucks and bulldozers with the Okanogan County logo pushing the debris over the edge of the road during the past couple of weeks. Some said they had observed county workers in previous years using a chipper that spewed ground-up vegetation directly into the creek.

Ecology recommended that, instead of dumping the brush in a heap, it be spread out to help control erosion, said Redfield-Wilder. “There are ways to dispose of debris to make it helpful,” she said. “To be effective, you don’t just dump it on slopes.” Big root balls could roll into the creek and block it, she said.

Because the slope is above a creek and on land managed by the Washington Department of Fish and Wildlife (WDFW), a WDFW enforcement officer visited the site on Monday (April 28). After hiking down to the creek and assessing the mounds of debris, Fish and Wildlife Officer Troy McCormick said it was too early to tell if there was a violation or which agency would have jurisdiction.

McCormick said there did not appear to be any debris in the creek, although Chad Stoothof, who lives in the area, said he had climbed down to the creek and saw one large root wad that had reached the water.

“From what I’m seeing at this point, there’s not a violation of the hydraulic code,” said McCormick. Specifically designed to protect fish, the state’s hydraulic code covers fish-bearing bodies of water and those that flow into waterways that support fish, according to Carmen Andonaegui, regional habitat program manager for WDFW.

Because Texas Creek does not have fish in it and has been dramatically altered over the years and no longer flows into the Methow River, there is no violation of the hydraulic code in this instance, Andonaegui said.

In addition to the code that protects fish, there are other regulations governing water quality and wetlands that are administered by Ecology, said Andonaegui.

At several places along Texas Creek Road this week, there is just dusty soil where the large piles of branches and tree trunks have been deposited, but area residents said that the slopes had supported shrubs such as chokecherry and serviceberry before the trees were dumped there. There are also some large trees growing on both sides of the narrow creek. “The small trees got wiped out when they dumped the stuff over the edge,” said Stoothof.

“This is definitely a steep-enough slope that we could have some interesting things happen,” said McCormick after surveying the site. “Having root systems and a variety of trees and shrubs would be a better stabilizer than dead trees.”

The state Legislature has specifically allowed counties and other local jurisdictions to develop their own management practices, said Redfield-Wilder. While Ecology has staff available for local governments to consult with, it is not required and Ecology typically intervenes only if there is an egregious problem, she said.

“Ecology wants an environmental benefit, not just regulations,” said Redfield-Wilder. “We hope [counties and other entities] will adopt best-management practices as standard procedure.”

Representatives from Ecology and Okanogan County plan to meet at the site next week to review the county’s practices for dealing with vegetative debris, said Redfield-Wilder.

County engineer Thomson did not return a call by the Methow Valley News by deadline. 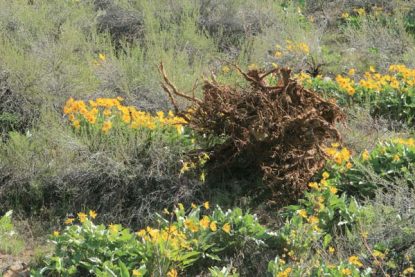 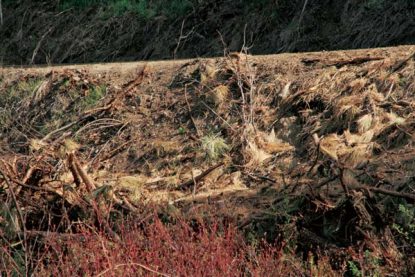 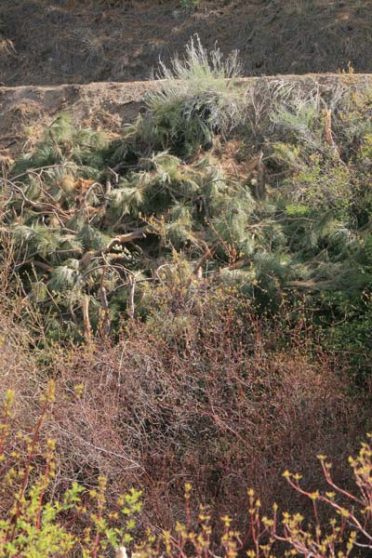