Clearing the North Cascades Highway is a careful but persistent process

Down on the valley floor the hills are green, balsamroot sunflowers are blooming, birds are singing. It’s spring.

But a few miles away in the North Cascades Mountains, it’s still a world of snow. Lots of snow.

For the past 18 years, Don Becker of the Washington State Department of Transportation (WSDOT) has overseen the annual clearing of the North Cascades Highway. This year ranks among the top three in terms of snow depth at Washington Pass, said Becker.

Road clearing crews knew it was going to be a demanding job this year when they encountered slides covering the highway just beyond the Silver Star gate above Mazama, where the road is closed each winter.

Delancey Ridge on the west side of the highway had dumped massive slides during the winter that roared across the roadway, depositing broken trees, limbs and rocks in their wake.

While slides off Delancey Ridge aren’t unusual, the evident power and size of the avalanches this past winter in this area is out of the ordinary, Becker said.

“It hasn’t come in with this intensity. It’s never crossed the highway in the 18 years I’ve been opening the road,” he said.

Driving up to Washington Pass last Thursday (April 17), Becker pointed to trees along the road opposite Delancey Ridge. Branches on the trees were broken 20 feet above ground level. “Those were probably broken by the air blast from the avalanches,” he said.

Because of the large amount of debris caught in the slides, the WSDOT crews had to use front-end loaders to move the snow off the roadway beyond the gate before they could make their way to the more-predictable slide areas beneath Cutthroat Ridge and the Liberty Bell massif.

There are 27 documented slide paths, some of them more than 2,000 feet long, along the highway between the road closure at the Silver Star gate and Rainy Pass, Becker said. Crews began clearing March 31 and by last week, they had made their way past the dozen active chutes below Cutthroat Pass and were attacking a mammoth slide, Liberty Bell No. 1, one of three enormous slides below the spires.

This year the debris pile of Liberty Bell No. 1 measured up to 65 feet deep and 400 feet across, Becker said.

Avalanches are always a concern to crews working in the slide zones, but this year crews are even more watchful. Because most of the winter’s snow came down after mid-February, it may not be as stable as snow that has spent all winter compacting itself.

As a result, avalanche control teams have been on site monitoring the slopes since road clearing work began. In past years, the avalanche crew hasn’t been on site until highway clearing crews reach the road below Cutthroat Ridge, according to WSDOT officials.

To assess the danger, WSDOT avalanche crews led by Mike Stanford, WSDOT avalanche supervisor, climbed Liberty Bell Mountain in early April to the 6,200-foot level and dug a 14-foot deep snow pit to determine which layers of snow might separate and slide.

As crews worked on the first slide zone below Liberty Bell last Thursday, Stanford stood by a truck parked on the roadway below the big horseshoe curve and gazed intently upward, watching for any signs of avalanche activity on the steep slopes of Liberty Bell. Conditions for the day were cool and not overly hazardous, he said.

Stanford was stationed just above a section of road that crews call “the annex,” in an area known as Spire Gulch. The annex is a section of highway passing below the Liberty Bell slide area, where crews clearing the highway above could trigger an avalanche when they push snow over the edge, potentially burying workers on the roadway below.

Before driving through that stretch of road heading up or down the mountain, crews radio to their co-workers that they are” entering the annex.” Reminding them to do that is a hard hat-wearing plastic pink flamingo they call Pink Floyd posted on the lower entrance to the area, and a sign on the upper end.

Up at Liberty Bell No. 1, a DC-8 caterpillar contracted through Lloyd Logging in Twisp worked alongside a smaller DC-6 cat owned by WSDOT. They moved back and forth across the top of the slide, peeling away layers of snow, pushing it to the edge of the precipitous drop-off and shoving it over.

A few years ago one of the cats got a little too close to the edge and began to tilt over, Becker said. With the operator holding tight inside the cab, crews attached a cable to the cat that was balancing on the edge of the cliff and pulled it back from the brink with another caterpillar.

In order to get the big bulldozers on top of the slides, Becker said, a Pisten Bully snowcat crawls up the slides and “pioneers tracks” over the massive snow piles that the larger machines can follow. Once they get up on top of the slide, they slice away at the snow until they get it to a depth — about six to eight feet — that WSDOT’s big snow blowers can manage.

Last week, after three days of work by the cats to cut down the Liberty Bell No. 1 slide, the snow blower began pushing into the downhill side of the slide, flinging snow over the side of the road and opening a narrow passage through walls of snow along the center of the highway. The pavement slowly began to emerge.

The D-6 cat peeled away snow and pushed it toward the blower to chew up and spit out. A second snow blower, excavators and graders follow the first snow blower to widen the roadway.

As an added safety precaution for crews working on the Liberty Bell slides, a 25-35 foot deep trench in the snow, called a “catch,” is dug about 100 feet back from the road on the uphill side. The catch is intended to do just that — catch sliding snow and give crews a chance to get away before they are caught in an avalanche, Becker said.

Everyone working in the avalanche zones carries an avalanche beacon and is trained on how to use them, he said.

Transportation officials are aiming for a May 15 opening this year. Becker said avalanche control specialists and road maintenance officials toured the highway on March 11 to assess conditions.

They found snow at the summit of Washington Pass (not in the slide zones) measured almost 10 feet, which is double the depth of last year. Snow on the highway below the Liberty Bell avalanche chutes averaged 35 feet deep. Conditions were similar to those they encountered in 2011, when it took approximately six weeks to clear and reopen the highway.

Becker said progress was slowed somewhat by mechanical problems with a snow blower, which kept it out of commission until this week.

East side crews had made their way through the first two Liberty Bell slides by Tuesday (April 22) and were taking down 35-foot-deep Liberty Bell No. 3. Crews working to clear the road on the west side of the North Cascades Highway had reached milepost 155, about eight miles away from the east side crews, but with plenty of deep snow in between.

When the highway is cleared and ready for opening, the avalanche crew may take some heavy control measures to determine the stability of the snow pack, including bringing in a howitzer to shoot down avalanches. 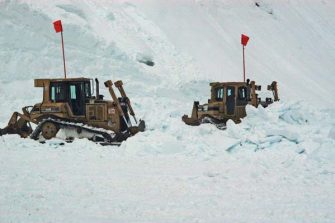 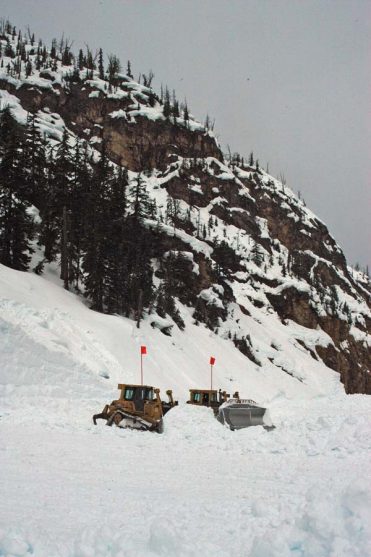 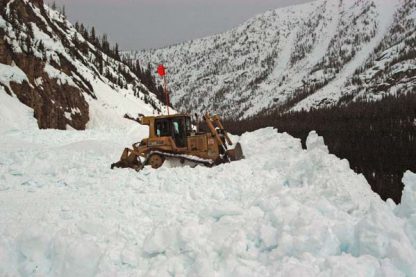 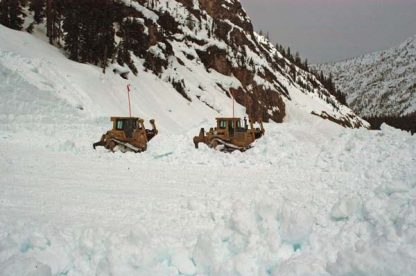 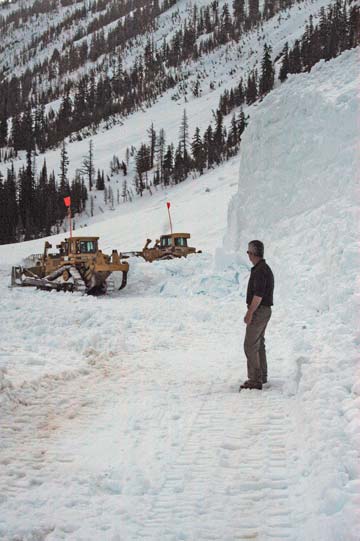 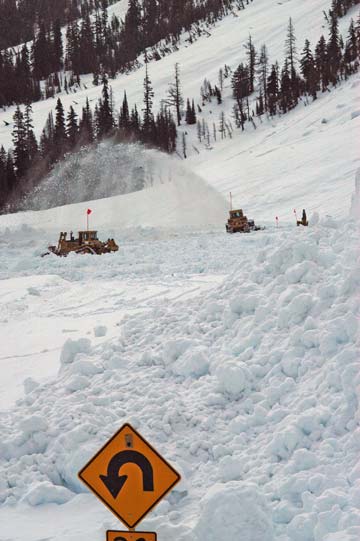 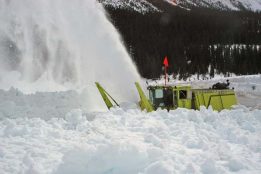 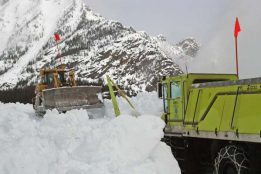 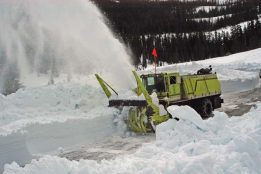 Looking up toward the Liberty Bell avalanche chutes, where a snowblower is at work. Photo by Ann McCreary 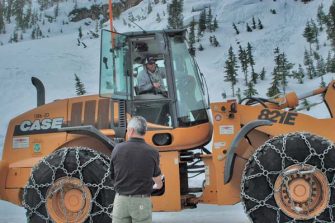 Don Becker, foreground, consults with one of the WSDOT crew members who are clearing the North Cascades Highway. Photo by Ann McCreary