Music students applying for the Cherrington scholarships must demonstrate a commitment to the study of music and active involvement in music.

“The level of musicianship displayed by all of the applicants was very high, and we are proud to play a part in the development of a musical community of young people here in the Methow Valley,” said Terry Hunt, a Cascadia board member.

Father/Daughter Dance is back

The Twisp Valley Grange will host this year’s Father/Daughter Dance on April 12, with games, refreshments and prizes in addition to dancing. This year’s theme is “Old Hollywood,” and attendees are encouraged to dress appropriately. The dance begins at 6:30 p.m. Cost is $8 in advance at Robins Egg Bleu in Winthrop and Hometown Pizza in Twisp, or $10 at the door. For more information, call (509) 845-5626 or email Twispfatherdaughterdance@live.com.

The Merc Playhouse will hold auditions on April 12 and 13 for its summer production of Shakespeare’s Twelfth Night.

Director Ki Gottberg said the classic comedy will be staged “cowboy style” and that “there are great roles for men and women ages 16 – 80, as well as Western musicians, dancers and production crew members.”

Auditions will begin at 11:30 a.m. on April 12 and at 10 a.m. on April 13 at the playhouse in Twisp. Rehearsals begin June 23. Performances will run from July 25 through Aug. 10. A complete list of roles is available at www.mercplayhouse.org. For more information or to request a different audition time, call 997-7529.

The Merc Playhouse Readers’ Theater production of Rapture, Blister, Burn, a comedy written by Gina Gionfriddo and directed by Ashley Lodato, will be presented April 17 and 18 at 7 p.m. each night. The staged reading features Midge Cross, Danielle Micheletti, Jason Paulsen, Dani Reynaud and Laurelle Walsh. The play is about two women friends who revisit their life choices decades later.

Admission is by donation. The play contains adult content. For more information, call 997-7529.

Relive the ’60s at the Barn

Local entertainers will bring back the 1960s in a variety show beginning at 7 p.m. on April 26 at the Winthrop Barn. Lauralee Northcott of the Horse Crazy Cowgirl Band is organizing the event, and performers who would like to participate can contact her at 996-2404 by April 1.

Admission will be by donation, with all proceeds to benefit the Barn Association. 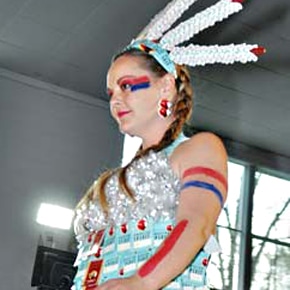 It’s time to start thinking about decorative garbage. Confluence Gallery’s annual Trashion Show is scheduled for May 10 at the Methow Valley Community Center in Twisp, from 7 – 10 p.m. Cost to enter is $20, or $10 for students. Ticket prices are $15 or $35 for VIP seating.