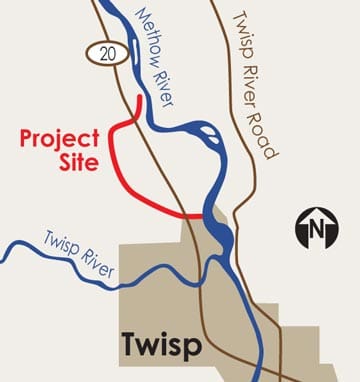 A project designed to restore salmon habitat by re-creating a historic side channel of the Methow River northwest of Twisp is expected to get underway this summer.

The “1890s Side Channel Restoration” project will restore a channel that once carried water along the valley wall parallel to Highway 20 north of Twisp. Planners say the restored channel will provide prime habitat for juvenile salmon and steelhead.

“The side channel water will be cooler in summer and will not freeze in winter, so for juvenile fish it’s a Shangri-La,” said Hans Smith, habitat biologist for the Yakama Nation Fisheries, and manager of the project.

The Yakama Nation Fisheries developed the $2.6 million project, which will be funded by Bonneville Power Administration under Columbia Basin Fish Accords — an agreement signed in 2008 among federal hydropower agencies and regional tribes to promote salmon recovery.

Smith appeared before the Twisp Town Council last week and received its approval to move ahead with the necessary environmental and other permits needed to begin work on the project. The Town of Twisp is one of 10 landowners involved in the project.

“Participating property owners are voluntarily allowing the Yakama Nation to restore side channel habitat in their back yards,” Smith said.

Historical surveys indicate the side channel was the main river channel of the Methow River in the 1890s. Since then, human development — including creation of Highway 20 and a large flood control levee — altered the course of the river.

The project would deepen the side channel starting at its outlet to the river on the north end of Twisp, and extend the channel 4,500 feet upstream. The deepened channel will pass under the bridge on Highway 20 just north of the town limits, and will reach the level of low groundwater to ensure surface flows do not drain into the soils and be lost.

The outlet to the river that will provide fish access to the channel is about 650 feet downstream of the bridge.

At the north end of the channel, groundwater will be collected by a perforated pipe system near the river and conveyed by a gravity-fed buried pipe to the head of the new enhanced side channel to provide year-round flow. The pipe will run under another small Highway 20 bridge about a mile north of town.

The pipe will provide four cubic feet of groundwater per second to the channel when the Methow River is at low flow, and up to 15 cubic feet per second at high flow, Smith said.

“We are in essence creating a spring-fed creek in the 1890s side channel,” Smith said. The perennial flow means fish can access and find habitat in the channel year-round. Groundwater stays warmer in winter and cooler in summer than the surface water in rivers, so the side channel fed by groundwater “provides thermal refuges” for juvenile fish, Smith said.

In addition to excavating the channel and creating a groundwater source to feed it, the project includes creating pools along the channel, placing woody debris (trees and logs) at various locations, and extensive planting of riparian vegetation to enhance habitat.

Work on the project will get underway in August, Smith said. “We are targeting low-flow season to conduct the work because we’re digging down to groundwater,” he said.

A key to gaining landowners’ participation in the project is that it will not increase or alter the way the river’s floods access and flow through the channel, Smith said.

“Essentially we are creating a ‘low-flow’ habitat system … that will be fed by thermal regulating groundwater sources. We are not interested in bringing the river’s high flows back into this side channel through the project,” Smith said.